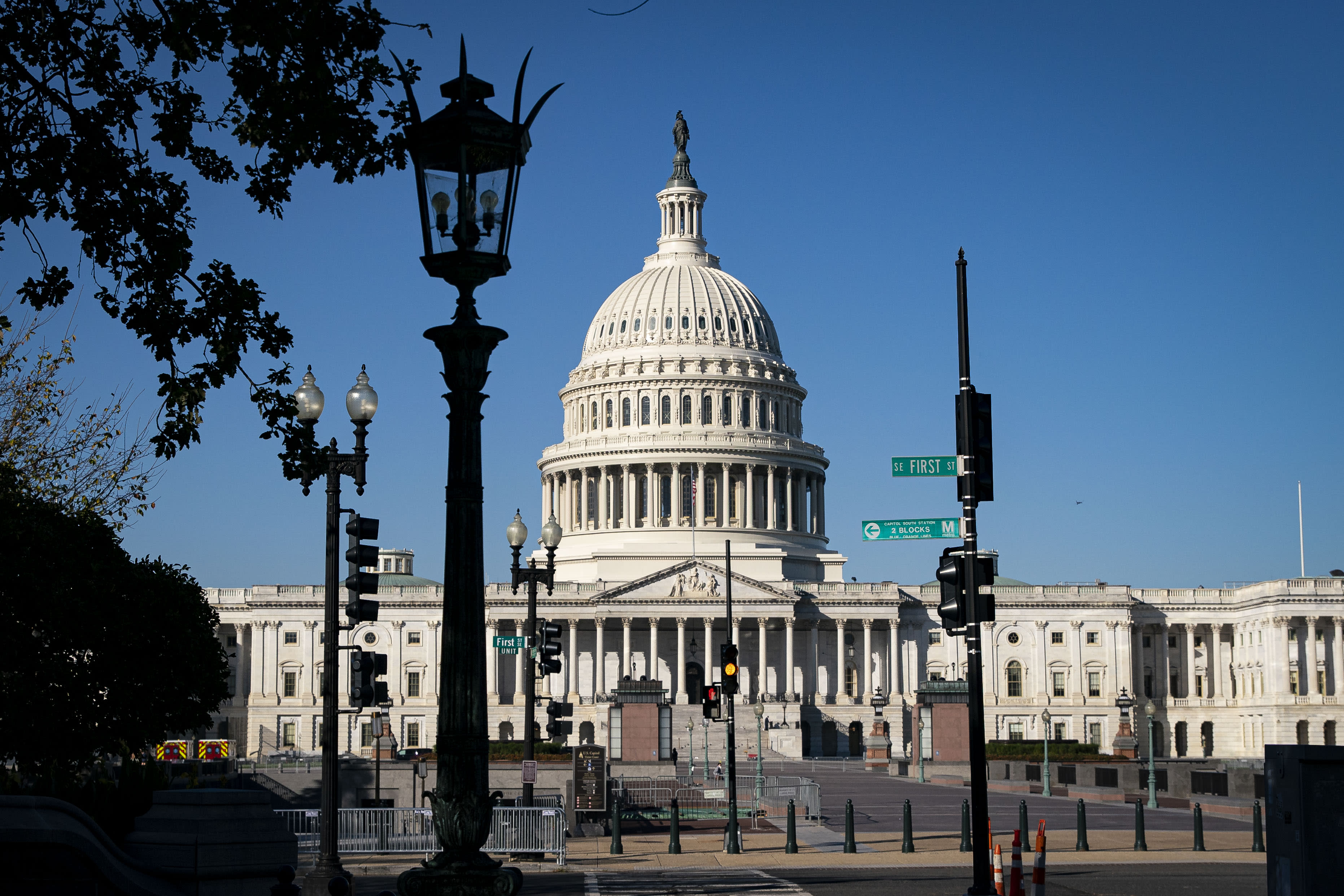 The U.S. Capitol is seen in the morning on November 4, 2020 in Washington, DC. The nation awaits the results of a historic presidential election between President Donald Trump and his Democratic challenger, former Vice President Joe Biden with swing states still too close to call.

As the question remains over who will capture the hotly contested presidential race, one casualty quickly emerging from fallout is the massive stimulus package Democrats were hoping to get to boost the economy.

A blue-wave victory in Tuesday’s elections was expected to cement funding as high as $3 trillion.

Instead, the likelihood that the Senate will stay in Republican hands, combined with a presidential race that at least is tilting to Democrat Joe Biden, likely translates into something smaller — or no deal at all.

“That’s the most dangerous arrangement of variables from an economic perspective, precisely because it makes the stimulus less likely,” said Eric Winograd, senior economist at Alliance Bernstein. “The economy still needs stimulus. The way things are going now is that it’s unlikely it will get stimulus and certainly it won’t get large stimulus.”

House Speaker Nancy Pelosi and Treasury Secretary Steven Mnuchin have been representing their respective sides in negotiations that occasionally showed promise but mostly reflected just how far apart the two sides were.

The HEROES Act that the House passed in May calls for $3 trillion in spending across a variety of areas, from unemployment benefits to student loan relief, rent and mortgage assistance and testing and tracing programs related to the coronavirus pandemic.

Republicans, though, seek a smaller, more tailored approach aimed mostly at enhanced help for displaced workers and limited aid elsewhere, to the tune of less than $1 trillion.

With the mixed bag of results off the election, Wall Street consensus quickly formed around a package that would be closer to what the GOP is proposing, with uncertainty over when it could get passed.

“We’re still likely to see a fiscal support package, but I would suspect the total size to be no more than $1 trillion,” said Steve Friedman, senior macroeconomist at MacKay Shields. “We’re much lower now in this divided government scenario.”

What it means for the economy

The stakes around the size of the stimulus are considerable with the economy on uncertain footing heading into the winter.

While GDP rose at a 33.1% annualized pace in the third quarter, employment gains are slowing and overall growth is expected to pull back. The economy is still in a technical recession that began in February, and whether negative growth returns could be contingent on how much more fiscal juice is needed and when it arrives.

“If you just didn’t do anything, it would clearly be a tremendous toll on many, many households, but it wouldn’t necessarily cause a double-dip recession,” Friedman said. “It would just slow the pace of the recovery in an aggregate sense.”

The political rancor comes at a time of heightened concern over the coronavirus spread.

Daily case growth has been around the highest of the pandemic, and hospitalization rates are climbing. European nations are again shuttering businesses to battle Covid-19, and if that should come to the U.S., it would complicate the recovery.

“It’s a little bit unsettling because of course we’re all watching what’s going on with Covid-19 and in Europe seeing the containment measures coming in,” said James Knightley, chief international economist at ING. “We could be entering a period where we could be talking about negative growth once again in the U.S. That political backdrop doesn’t make it easy to see a swift fiscal response to this.”

Lacking action from the fiscal side, financial markets again could turn their eyes to the Federal Reserve for more monetary help.

Though the central bank’s arsenal is somewhat limited, it still has some weapons to deploy. The Fed could increase its monthly asset purchases and extend the duration of the bonds it is acquiring as part of more aggressive quantitative easing. It also could use stronger guidance about what it will take to raise rates, and use its purchases to control the yield curve.

What the Fed could do

The Fed concludes its two-day meeting Thursday. Markets don’t expect much in terms of action, but Chairman Jerome Powell could indicate what measures if any officials are considering to aid in the recovery.

“The Fed could consider easing terms to facilitate the flow of credit. The Fed could also ramp up the QE program, buying Treasuries and [mortgage-backed securities] at a faster rate, as well as corporate credit as needed, particularly if it sees concerns over market liquidity,” economist Michelle Meyer of Bank of America Global Research said in a recent note. “The Fed has tools and will use them, in our view.”

Meyer said a Biden victory combined with a split Congress likely would see stimulus of $500 billion to $1 trillion “passed after inauguration but with some delay. There is also some chance of continued gridlock in this scenario.”

Markets didn’t seem to mind any of it Wednesday, rallying strongly despite the uncertainty hanging over the election.

Prospects of the kind of gridlock that Wall Street seems to prefer combined with continued likelihood of some form of stimulus helped fuel the strong move higher.

“What the market tends not to like the most is when you have one party controlling the presidency, the House and the Senate. That blue wave that was talked about earlier clearly is not going to happen,” said Randy Frederick, vice president of trading and derivatives at Charles Schwab. “Markets have the tendency to move more on what they expect than what actually happens. Some of what has kept the market buoyant is the continued commentary from Nancy Pelosi and Steve Mnuchin that they’re still taking and still negotiating.”