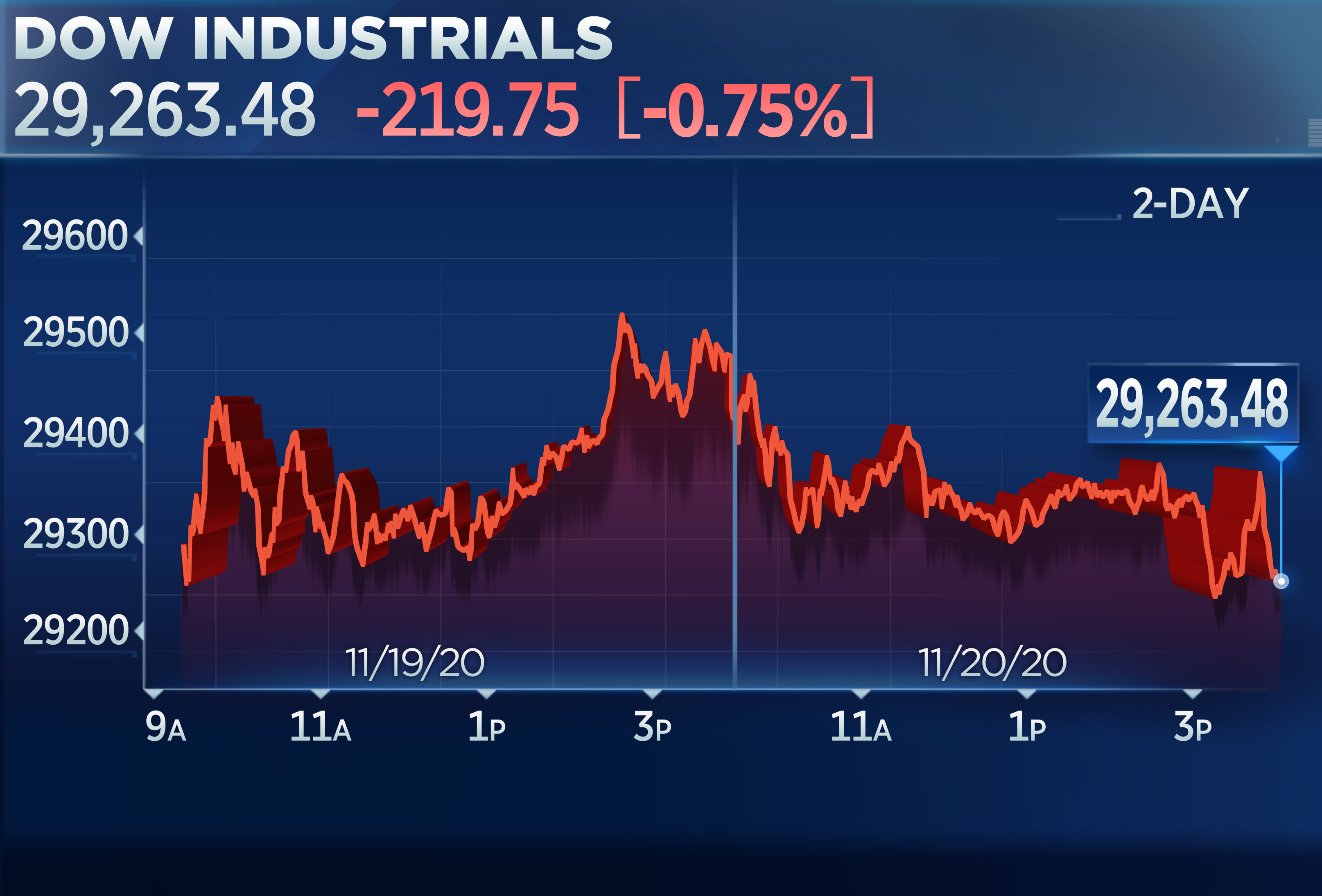 Boeing and Salesforce were the worst-performing stocks in the Dow, falling 2.9% and 2.5%, respectively. Technology and industrials dropped 1.1% and 0.9%, respectively, to lead the S&P 500 lower.

The U.S. seven-day average of daily new Covid-19 infections now stands at 165,029, according to a CNBC analysis of Johns Hopkins data, 24% higher than a week ago. On Thursday alone, a record 187,833 cases were reported. Many states have rolled back reopening plans and implemented fresh restrictions to curb the spread.

California Gov. Gavin Newsom on Thursday issued a “limited Stay at Home Order” on a majority of the state’s residents, requiring nonessential work and gatherings to cease between 10 p.m. and 5 a.m. Meanwhile, the Centers for Disease Control and Prevention advised Americans against traveling for Thanksgiving.

JPMorgan economists wrote in a note that coronavirus-related restrictions will “likely deliver negative growth” in the first quarter of 2021. They also downgraded their first-quarter GDP outlook to a contraction of 1%, making them the first Wall Street economists to forecast negative GDP for the start of next year.

“The market can see there’s light at the end of the tunnel,” said Aaron Clark, portfolio manager at GW&K Investment Management. “On the other side of that are spiking cases and the shutdown measures needed to keep that in check. That’s what the market’s wrestling with.”

Also weighing on sentiment Friday was a disagreement between the Treasury Department and the Federal Reserve over the continuation of funding for some of the emergency programs implemented during the recession.

Treasury Secretary Steven Mnuchin is seeking to end a handful of the Fed facilities that bought corporate bonds as well as the Main Street Lending Program targeted towards small- and medium-sized businesses. The move has drawn pushback from the central bank, which said the programs continue to serve an important role to support the vulnerable economy.

“Mnuchin’s move will tighten financial conditions and removes a safety net for markets at the wrong moment,” Krishna Guha, Evercore ISI vice chairman and head of global policy and central bank strategy, said in a note on Thursday.

So-called Bond King Jeffrey Gundlach said Mnuchin’s request would shut down the corporate credit programs that “propped up” the markets in the spring. The DoubleLine Capital CEO raised the question if the markets can hold up without the Fed’s support, saying “the training wheels are coming off.”

To be sure, Mnuchin told CNBC’s Jim Cramer on Friday that people were misunderstanding this decision, adding there is still plenty of money to provide funding if needed.

“This was a very simple thing. We’re following the intent of Congress,” Mnuchin said on “Squawk on the Street.” Separately, Mnuchin added he and Republican leaders will discuss a plan to push through targeted fiscal stimulus with the help of Democrats.

On the bullish side, investors got more good news on the vaccine front. Pfizer and BioNTech said they applied for an emergency use authorization for their vaccine from the Food and Drug Administration. The companies said they can be ready to ship the vaccine within hours after the FDA approves the authorization.

Brent Schutte, chief investment strategist for Northwestern Mutual Wealth Management, thinks the market could be volatile in the near-term, but noted that “any market downside is going to be supported by the reality that you do have very effective vaccines that are going to be available in the not-so-distant future.”