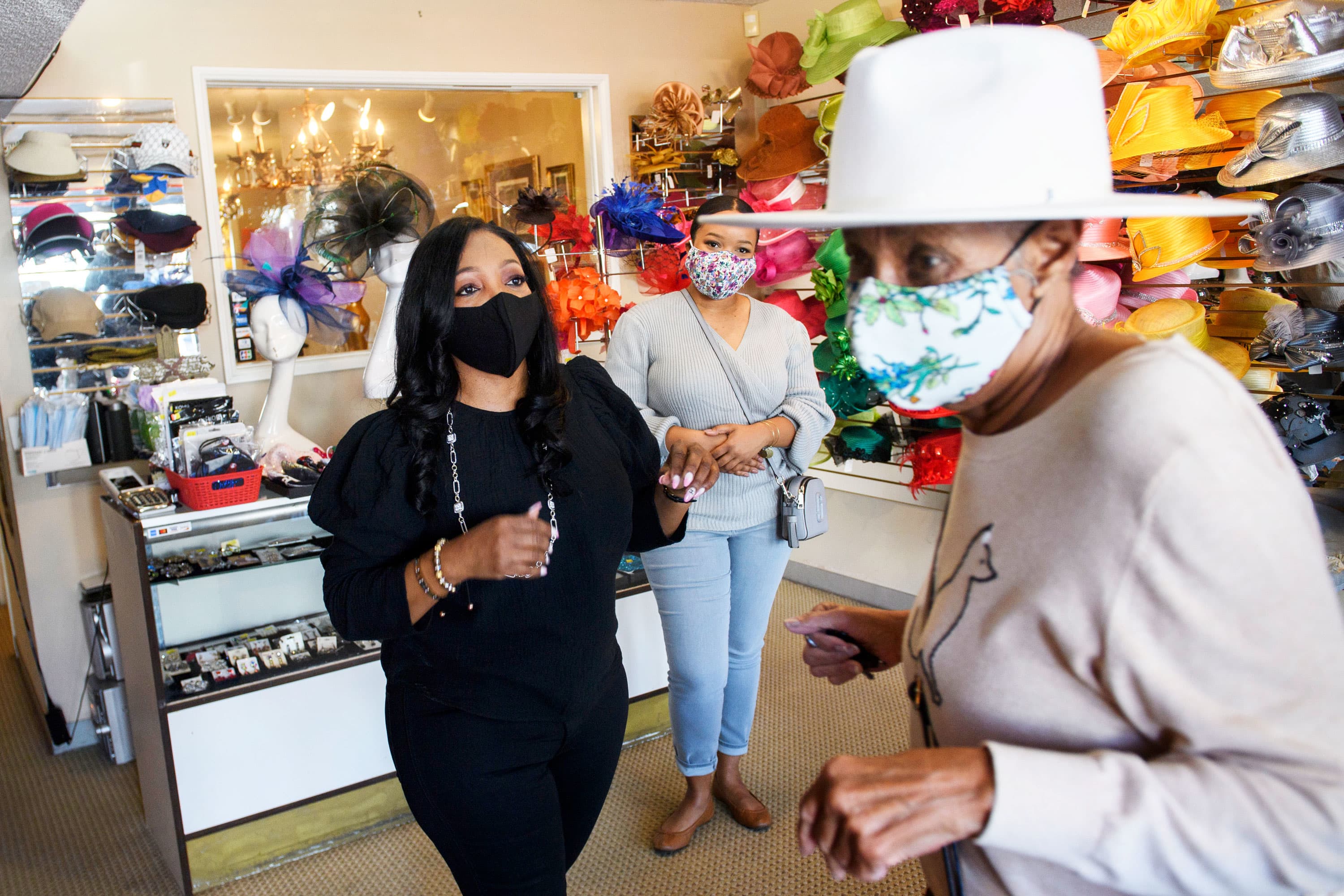 Customer Tamara Jenkins tries on a hat with Meeka Robinson Davis, owner of One-Of-A-Kind Hats, as Davis’ daughter Chrstiana Davis looks on, at the store in the Windsor Hills neighborhood of Los Angeles, California, November 24, 2020.

Holiday shoppers are not only seeking low prices and unique gifts. Many want their money to matter.

This year the coronavirus pandemic has battered small businesses and the killing of George Floyd has shined a harsh light on racial inequities. The result: Nearly 60% of consumers said they are likely or highly likely to shop in neighborhood stores and at local retailers to contribute to the local economy this holiday season, according to a survey of more than 1,500 U.S. consumers by Accenture in late August and in September. About the same percentage said they’re likely or highly likely to buy more locally sourced products this year.

Consumers said they want to support companies that reflect their values, too. About 4 in 10 respondents said they plan to shop at minority-owned businesses, and the same number said they will shop with retailers that support the Black Lives Matter movement.

“People work really, really, really hard for the money that they make and when they give that to a company, they want to make sure that company is going to work really, really hard to create the kind of world that they want to live in,” said Aurora James, founder of the 15 Percent Pledge. “When you spend a dollar somewhere, you’re voting for that thing to keep existing — especially in this pandemic world that we’re in where so many companies are not going to be able to exist anymore. Every single dollar that you spend really counts.”

Major retailers have taken cues and responded by backing small businesses and carrying more of their products. Lowe’s has given millions of dollars in grants to small and minority-led businesses and kicked off a pitching contest to identify standout entrepreneurs from diverse backgrounds. Macy’s and Williams Sonoma-owned West Elm have pledged at least 15% of their shelf space to products from Black-owned businesses. And Nordstrom recently added Black-founded brands, such as Baby Tress and Bomba Curls, to its beauty department.a

Other companies donate to social causes. Sustainable sneakers start-up AllBirds, for example, raised prices by $1 on Black Friday to donate to a climate fund founded by activist Greta Thunberg. It will match all purchases with another $1.

“This period of the year is synonymous with with mass consumption and throwaway culture,” Allbirds co-founder Tim Brown told CNBC in an interview. “We’re trying to make a statement that it can be done differently.”

Kendra Scott, a jewelry brand sold by major retailers like Neiman Marcus, Nordstrom and Bloomingdale’s, debuted a line of bracelets for a good cause. Half of proceeds support Feeding America, which feeds kids who aren’t getting meals at school during the pandemic.

Next year, Lowe’s plans to put more than 400 products from entrepreneurs in its stores or on its website. The home improvement retailer has donated $30 million in grants for minority-owned businesses and $25 million toward small business grants in rural communities. Those struggling businesses include plumbers, electricians and other home professionals who buy supplies at home improvement retailers, but lost business during the pandemic.

The home improvement retailer is led by Marvin Ellison, one of a handful of Black CEOs in the Fortune 500. In an interview with CNBC in May, he said he was amazed by the flood of grant applications the company received.

Jeweler Kendra Scott is donating half of the proceeds of its Everlyne bracelet to Feeding America.

James, the founder of the 15 Percent Pledge and a Brooklyn-based entrepreneur, said the pandemic has amplified consumers’ desire to “shop small” — whether they go to a mom-and-pop store or a discover a product from a local founder at a major retailer.

“We want to give gifts that make people feel good on both sides of it,” she said. “If I am at the checkout counter, I would love to be able to give a gift that’s not only going to the person that I am giving it to, but also to the small business that I bought it from.”

The 36-year-old entrepreneur wrote an Instagram post that went viral in the wake of the George Floyd protests, calling on companies to commit at least 15% of their shelves to products from Black-owned businesses to reflect the makeup of the U.S. population.

Nine companies, including well-recognized brands like Macy’s, Sephora and Rent the Runway, have since signed on to the 15 Percent Pledge.

James said she pushed big companies to help because she was troubled by the toll of the pandemic on Black-owned businesses. About 41% of Black-owned businesses across the country shut down between February and April, according to a University of California, Santa Cruz study. During the same period of time, just 17% of white businesses shut down, the study found.

Consumers’ support of small businesses this holiday could determine if they can keep their doors open, she said. “Walmart doesn’t really need your support this holiday season, but small Black-owned businesses across America really do.”

Some shoppers will do that on Saturday, a day that has become known as Small Business Saturday. The shopping event, created by American Express a decade ago, encourages shoppers to spend money in their communities.

When large companies throw weight behind social causes, James said, they typically see a benefit to their bottom line, too, since those stances resonate with consumers.

“Corporate America tends to turn a blind to some of these things,” she said. “But I’ve always known that being equitable, being sustainable, those are things that are not just the right thing to do, but they’re also really good business.”

She said she knows the difference a major retailer can make first-hand. About seven years ago, Nordstrom featured a collection from Brother Vellies, the luxury brand she founded that sources shoes and handbags from artisans around the world. The company gave her prime real estate: Seven window displays in cities across the country.

“It was a huge deal to me,” she said. “It absolutely changed my business.”