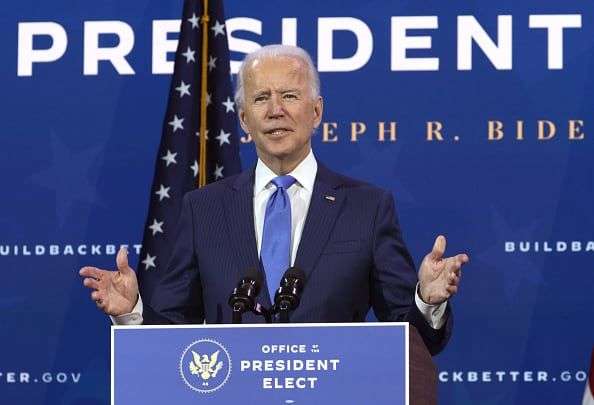 President-elect Joe Biden said Friday’s underwhelming jobs report foreshadows a “dark winter” that demands “urgent action” from President Donald Trump and Congress, as Covid spreads out of control across the U.S. and Americans face benefit cuts if Congress does not pass stimulus legislation.

Biden, in a statement issued by his office, said the latest report on the U.S. labor market, which showed significantly slowing job growth amid the coronavirus pandemic, “confirms we remain in the midst of one of the worst economic and jobs crises in modern history.”

“This is a grim jobs report. It shows an economy that is stalling,” Biden said.

Biden’s statement noted that the “dire jobs report” offered only a snapshot of the situation in November, “before the surge in COVID cases and deaths in December as we head into a dark winter.”

The U.S. on Thursday reported the most new infections, hospitalizations and single-day deaths of the entire pandemic — 217,664 new cases, more than 100,667 patients in hospitals, and 2,879 fatalities. And the nation’s top public health officials are warning that the situation will get worse.

CDC Director Dr. Robert Redfield warned Thursday that the next three months will be “the most difficult in the public health history” of the U.S., with Covid outbreaks hitting every corner of the nation and threatening to overwhelm the country’s health-care system.

Biden, in his statement Friday, said Americans also face a looming economic crisis on top of the public health crisis if Congress and the Trump administration do not pass a stimulus deal by the end of the month.

“If Congress and President Trump fail to act, by the end of December, 12 million Americans will lose the unemployment benefits they rely on to keep food on the table and pay their bills. Emergency paid leave will end. The moratorium on evictions will expire. States and cities will lose vital tools they need to help pay for testing and public health workers to fight COVID, to keep children and educators safe in schools, and to provide assistance to keep small businesses alive,” Biden said.

But Biden said he was “encouraged” by progress being made on Capitol Hill, where congressional leaders are signaling “momentum” in the protracted negotiations over an additional pandemic relief bill.

“In the weeks since the election ended, there were questions about whether Democrats and Republicans could work together. Right now, they are showing they can. Congress and President Trump must get a deal done for the American people,” Biden said.

Trump’s chief economic advisor Larry Kudlow, in a CNBC interview Friday, said the fundamentals of the economy are strong despite jobs coming in lower than expected. He called for a targeted relief plan to help Americans as the country prepares for the distribution of a coronavirus vaccine.

However, Biden said that “any package passed in the lame duck session is not enough. It’s just the start.”

“Congress will need to act again in January. As we inherit this economic crisis, Vice President-elect Harris and I are working on the plan we will put forward for the next Congress to move fast and control the pandemic, revive the economy, and build back better than before. And, we hope to see the same kind of spirit of bipartisan cooperation as we are seeing today,” Biden said.