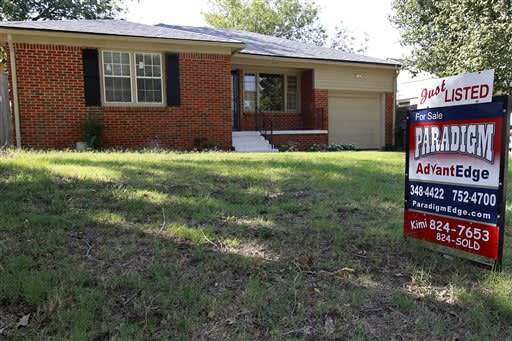 In this Friday, Sept. 21, 2012, photo,a home is for sale in Oklahoma City. Average U.S. rates on fixed mortgages fell again to new record lows. The decline suggests the Federal Reserve’s stimulus efforts may be having an impact on mortgage rates. Mortgage buyer Freddie Mac said Thursday, Sept. 27, 2012, the rate on the 30-year loan dropped to 3.40 percent. That’s down from last week’s rate of 3.49 percent, which was the lowest since long-term mortgages began in the 1950s. (AP Photo/Sue Ogrocki)

Mortgage rates set yet another record low last week — the 15th this year and the second record in as many weeks.

The drop, however, did not spark any significant change in weekly mortgage applications, but demand is substantially stronger than it was a year ago.

“U.S. Treasury rates stayed low last week, in part due to uncertainty over the prospects of additional pandemic-related government stimulus, as well as concerns about the continued rise in Covid-19 cases across the country,” said Joel Kan, MBA’s associate vice president of economic and industry forecasting.

Applications to refinance a home loan, which are most sensitive to mortgage rate fluctuations, increased 1% for the week but were a strong 105% higher than the same week one year ago. Last year at this time, mortgage rates were 113 basis points higher. Refinancing now would give anyone who refinanced last year substantial savings on their monthly payments.

Mortgage applications to purchase a home increased 2% for the week and were 26% higher annually. December is not typically a strong month for home sales, but demand continues to surge as Americans continue to work from home. They want more space, and some now have the ability to work from anywhere, giving them far more options for relocation.

“Applications to buy a home increased for the fourth time in five weeks, as both conventional and government segments of the market saw gains,” said Kan. “Government purchase applications rose for the sixth straight week to the highest level since June — perhaps a sign that more first-time buyers are entering the market.”

First-time buyers have been up against strong competition for seriously low supply at the entry level of the market. Cash-heavy investors continue to pile in, and homebuilders are not building nearly enough low-priced homes to meet the demand. Home prices at the low end are rising fastest, leaving some potential buyers on the sidelines.