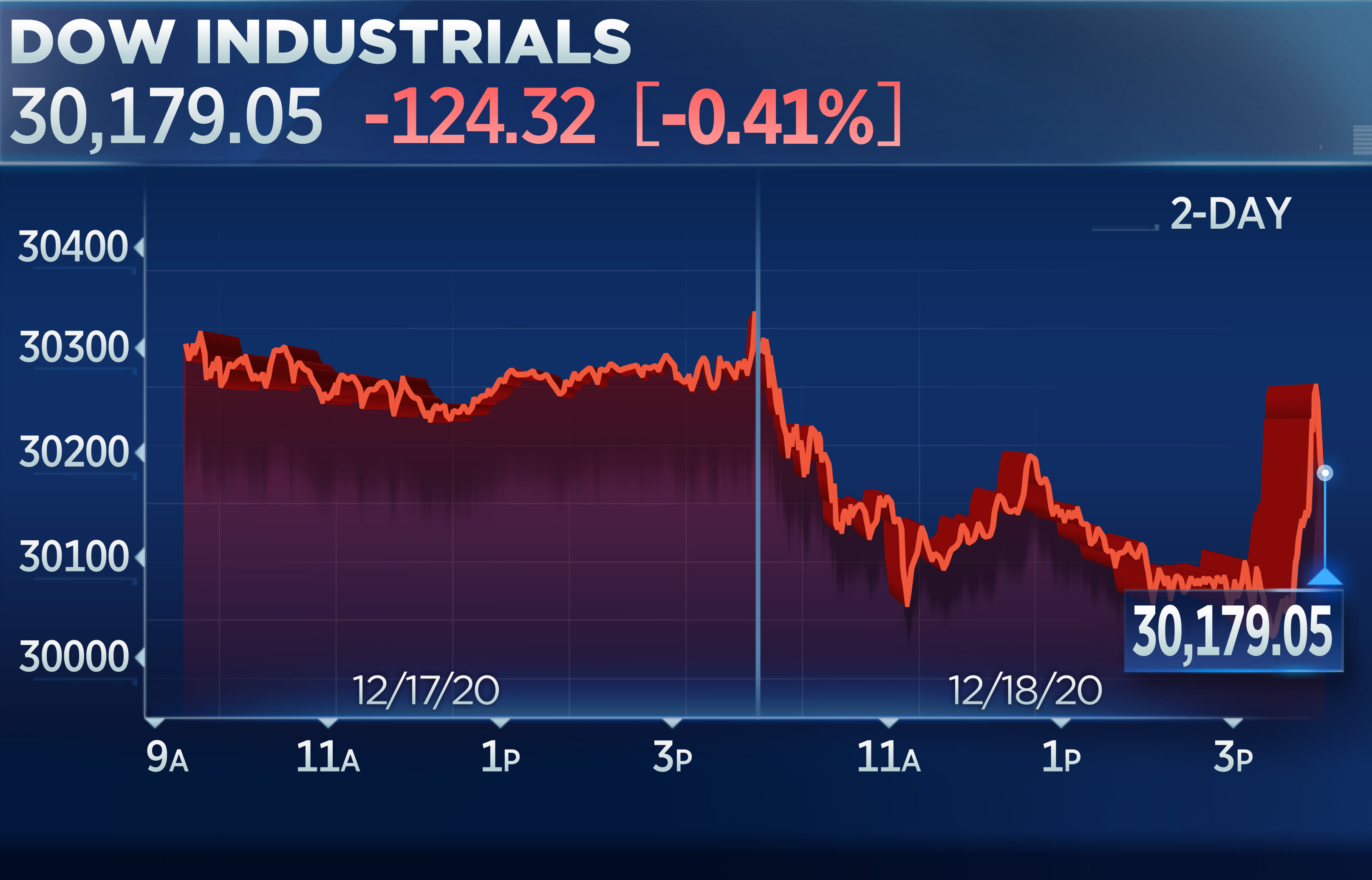 Leaders on Capitol Hill said they are close to an agreement that would provide $900 billion in additional aid. The talks, which have stretched on for months, are up against the wire, with federal funding lapsing at 12:01 a.m. ET on Saturday.

Senate Majority Leader Mitch McConnell, R-Ky., said Friday that the negotiations “remain productive.” “In fact, I am even more optimistic now than I was last night that a bipartisan, bicameral framework for a major rescue package is very close at hand,” he added.

House Majority Leader Steny Hoyer, D-Md., said in the afternoon that the chamber would go into a recess until 5 p.m. while congressional leaders try to get a “clearer picture” of how to move forward. He told representatives to keep Friday night, Saturday and Sunday free.

As the market closed, Congress was trying to approve a measure to keep the government running for two more days, CNBC confirmed.

With a market capitalization of more than $600 billion after a 700% rally this year, the electric carmaker will be joining as the seventh-largest company in the index.

Tesla is being added to the benchmark in one fell swoop, marking the largest rebalancing of the S&P 500 in history. It’s estimated that passive funds tracking the S&P 500 needed to buy more than $85 billion of Tesla, while selling $85 billion of the rest of the index to make room for it.

Several major exchange-traded funds like the Invesco QQQ Trust (QQQ), which mirrors the Nasdaq 100, were rebalanced alongside the S&P 500 Friday. Meanwhile, the Tesla inclusion coincided with a quarterly event known as quadruple witching, when options and futures on indexes and equities expire.

Major averages eked out gains for the week despite Friday’s weakness. The Dow gained 0.4% for the week. while the S&P 500 advanced 1.3% for its its fourth positive week in five. The tech-heavy Nasdaq outperformed with a 3.1% gain for the week.

Stocks gained earlier this week amid optimism toward a stimulus deal as well as the vaccine rollout. On Thursday evening, Food and Drug Administration advisors overwhelmingly backed Moderna’s Covid vaccine, a key step towards public distribution approval by the FDA. The first inoculations in the U.S. were given Monday with Pfizer and BioNTech’s vaccine.

Investors were betting that a rise in Covid cases as well as disappointing economic data would push lawmakers to cement a new aid package. Jobless claims last week hit their highest level since early September, while retail sales fell more than anticipated in November.

“The bad news this week is that the third wave continues to get worse, and the economic damage from the pandemic continues to mount,” said Brad McMillan, chief investment officer at Commonwealth Financial Network. “The good news is that policy is starting to succeed in containing the virus, and the federal government will likely pass a stimulus bill, mitigating both major risk factors.”

McMillan said investors should expect more volatility in the short term amid developments on the stimulus and vaccine front, before the economy returns to growth in 2021. “With vaccines now available and ramping up, we are at the end of the beginning of the pandemic, and markets recognize that,” he added.