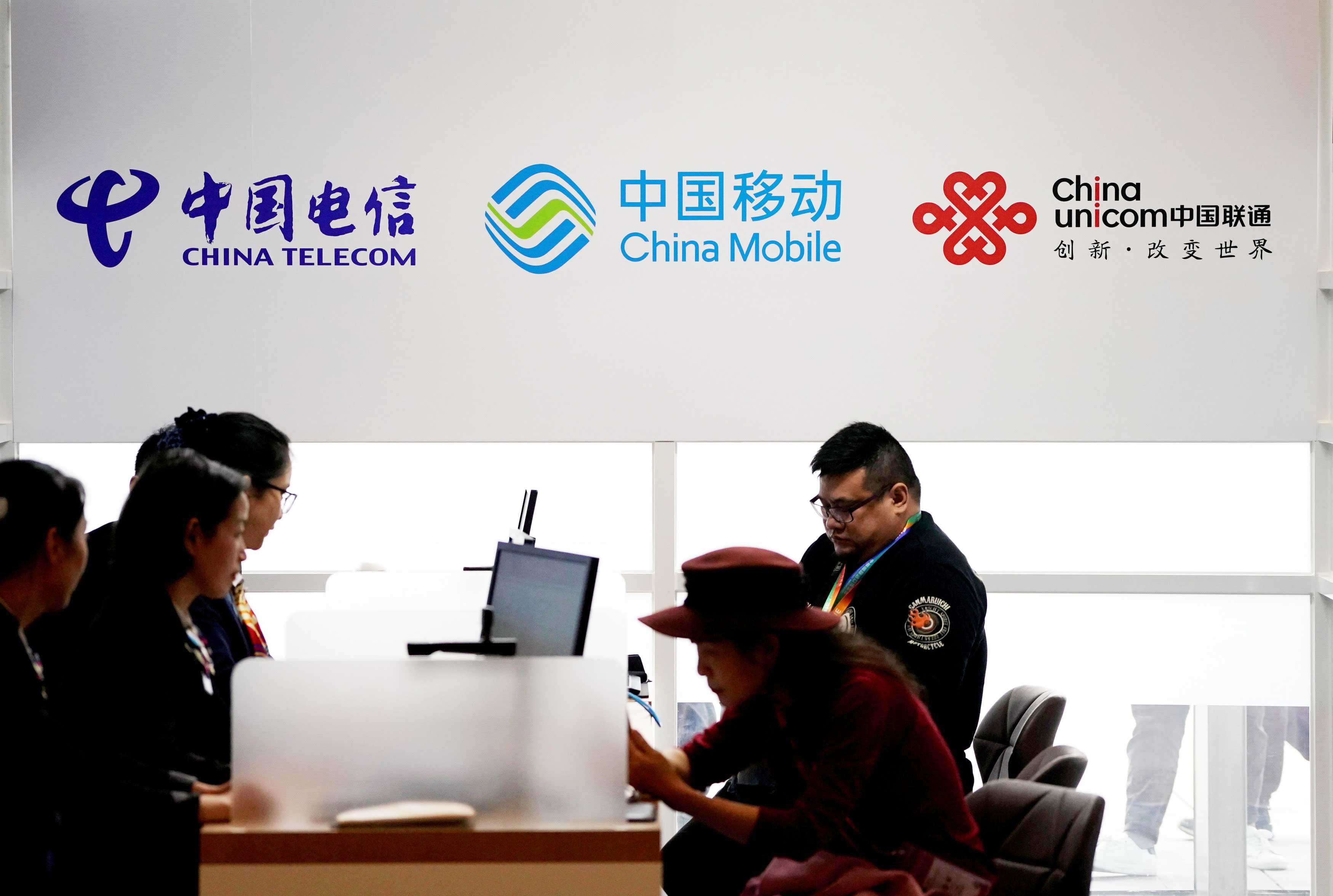 Signs of China Telecom, China Mobile and China Unicom are seen during the China International Import Expo (CIIE) at the National Exhibition and Convention Center in Shanghai, China, Nov. 5, 2018.

BEIJING — Outgoing President Donald Trump’s ban on U.S. investments in some Chinese companies has hit some of the largest stocks in Hong Kong.

In an effort to comply with new clarifications on the order, stock index giants MSCI and FTSE Russell will remove the Hong Kong-listed shares of three Chinese telecommunication giants: China Mobile, China Telecom and China Unicom.

The deletions will take effect by the market open on Monday, meaning the stocks will no longer be part of indexes that are tracked by trillions of global investment dollars.

Shares of the three companies listed in Hong Kong sold off sharply Friday, bringing five-day losses to 13% for China Telecom, more than 7.5% for China Unicom and over 8% for China Mobile.

It comes less than two weeks before the scheduled inauguration of President-elect Joe Biden, and financial institutions are still trying to navigate the implications of Trump’s executive order that bans Americans from owning shares of Chinese companies the White House alleges are linked to China’s military.

The New York Stock Exchange will also go ahead with removing the U.S.-traded shares of the three Chinese telecom companies before the U.S. markets open on Monday.

MSCI and FTSE Russell’s deletions carry more significance for the Chinese telecom companies, since the three stocks rank among the 100 largest listed in Hong Kong by market capitalization, according to Wind Information data. The Hong Kong shares are also far more actively traded than those listed in the U.S.

Global investors have grown increasingly interested in China, which economists expect will become the world’s largest economy in the next several years. For its part, the Chinese government would like to attract more foreign capital, and has in the past tried to improve the efficiency of state-owned companies by tapping private capital.

The dual-Hong Kong and New York listing in 1997 of what’s now called China Mobile was the first massive privatization of a company sponsored by the central government which raised $4.04 billion at that time, or $6.32 billion in 2019 dollars, according to Goldman Sachs, which played a leading role in the offering.

The IPO also marked the first time a major Chinese state-owned company listed some of its shares on the New York Stock Exchange, Goldman added.

About two decades later, following a landmark decision in 2018, MSCI gradually added many mainland-traded A-shares to its emerging markets index that is tracked by major global investment funds.

But the trend of greater integration between the two countries has since reversed. Tensions between the U.S. and China began to escalate more than two years ago under the Trump administration. The dispute initially centered on trade, but has now spilled over to technology and finance.

Trump’s executive order gives U.S. investors until Nov. 11, 2021 to divest, or sell out, of affected holdings. The majority of the companies named, if publicly traded, are not listed in the U.S.

It is unclear what President-elect Joe Biden’s policy will be on financial ties between the U.S. and China. Analysts expect his administration to focus on gathering traditional U.S. allies to exert pressure on Beijing regarding longstanding complaints about China’s unfair business practices.