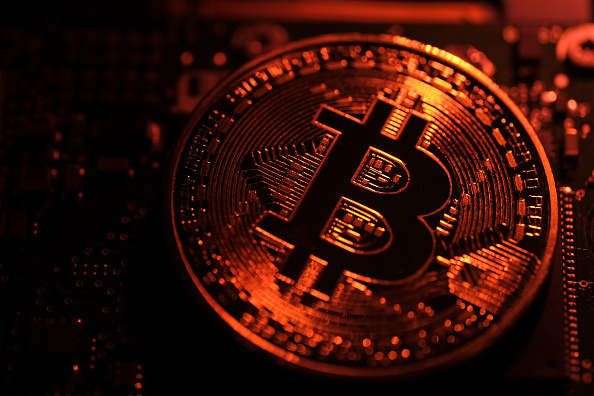 In this photo illustration, a visual representation of digital cryptocurrency Bitcoin (BTC) is arranged on a circuit board of a hard drive.

Bitcoin and U.S. tech stocks are viewed by investors as the biggest market bubbles right now, according to a Deutsche Bank survey released Tuesday.

The survey, which is based on responses from 627 market professionals between Jan. 13-15, found that the vast majority of investors (89%) think some financial markets are in bubble territory.

Out of those bubbles, bitcoin and U.S. tech shares are top of the list. Bitcoin is viewed as a more extreme case, with half of respondents giving the cryptocurrency a rating of 10 on a 1-10 bubble scale.

U.S. tech stocks were seen as the next largest bubble, Deutsche Bank said, with an average score of 7.9 out of 10 and 83% of respondents giving it a tech bubble rating of 7 or higher.

Investors also think that bitcoin and electric car manufacturer Tesla are more likely to fall than rise over the next year.

“When asked specifically about the 12 month fate of Bitcoin and Tesla — a stock emblematic of a potential tech bubble — a majority of readers think that they are more likely to halve than double from these levels with Tesla more vulnerable according to readers,” Deutsche Bank said.

Bitcoin has been on a wild ride during the past few months. The world’s largest cryptocurrency by market value rallied to an all-time high of nearly $42,000 just two weeks ago before slipping sharply. It is up more than 800% from March 2020 lows, when the cryptocurrency cratered on the back of concerns about the coronavirus pandemic.

Bulls say the digital coin has been buoyed by increased interest from institutional buyers, as well as the perception that bitcoin is an uncorrelated safe-haven asset similar to gold. Skeptics, on the other hand, say bitcoin is a speculative asset and a market bubble likely to burst one day.

Tesla, meanwhile, also saw a massive climb in its share price in 2020 which extended into the new year and crowned its CEO Elon Musk the world’s richest person. The stock is up over 700% from where it was trading 12 months ago.

And though investors may think bitcoin, Tesla and other U.S. tech stocks are in bubble territory, it’s not clear exactly what might “pop” those bubbles.

“Easy monetary situations” supportive of bubbles are likely to stay, with 71% of respondents telling Deutsche Bank they don’t believe the Federal Reserve will tighten policy before the end of 2021. But a quarter of investors said economic growth or markets could force their hand.

More investors say the rollout of coronavirus vaccines is falling short of expectations (41%) than those who said it’s been better than expected (22%). Just over half of respondents said they saw life returning to normal by the end of the year.