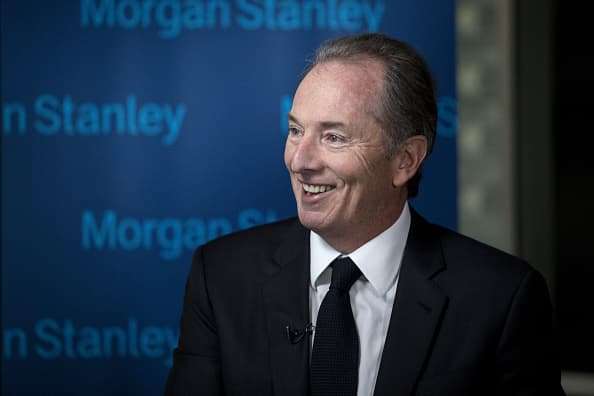 The firm reported a 51% increase in profit to $3.39 billion, or $1.81 per share. When excluding $189 million in integration costs tied to last year’s E-Trade acquisition, profit was $1.92 per share, compared with the $1.27 estimate of analysts surveyed by Refinitiv. Revenue of $13.64 billion was more than $2 billion beyond the $11.54 billion estimate.

“The firm produced a very strong quarter and record full-year results, with excellent performance across all three businesses and geographies,” CEO James Gorman said in the release. “Our unique business model continues to serve us well as we further execute on our long-term strategy with the acquisitions of E*TRADE and Eaton Vance.”

Investment banking generated $2.3 billion in revenue, half a billion dollars more than the $1.81 billion estimate of analysts surveyed by FactSet. The results were driven by stock underwriting revenue that more than doubled from a year earlier on robust IPO and follow-on activity.

The wealth management division produced $5.68 billion in revenue, nearly half a billion dollars more than analysts had anticipated, thanks to higher asset levels and greater fee-generating activity, as well as the impact of the E-Trade deal.

Morgan Stanley has the biggest wealth management business among the six largest U.S. banks, operations that typically benefit from rising markets. That business is being bolstered by the bank’s $13 billion E-Trade acquisition announced a year ago, and the fourth quarter is the first period E-Trade is integrated into the larger enterprise.

Shares of the bank were almost unchanged after rising 1.9% in premarket trading.

Gorman took a bit of a victory lap in his annual update to the firm’s strategic targets, laying out the case that his firm was at an inflection point. The next decade will see a sustained, higher level of revenues and returns than in previous periods, thanks to gains in market share and Gorman’s acquisitions.

The firm kept its long-term goals largely unchanged, saying that returns on tangible common equity will be 17% or higher, rather than the 15% to 17% range given a year earlier.

“We’re in the growth phase of this company for the next decade,” Gorman told analysts after the results were released.

Morgan Stanley is the last of the big U.S. banks to report fourth-quarter earnings. JPMorgan and Goldman Sachs beat analysts’ expectations for revenue and profit, helped by trading, while Citigroup, Wells Fargo, and Bank of America disappointed on revenue as lending margins were squeezed.

Shares of New York-based Morgan Stanley climbed 33% in 2020, besting the 4.3% decline of the KBW Bank Index.