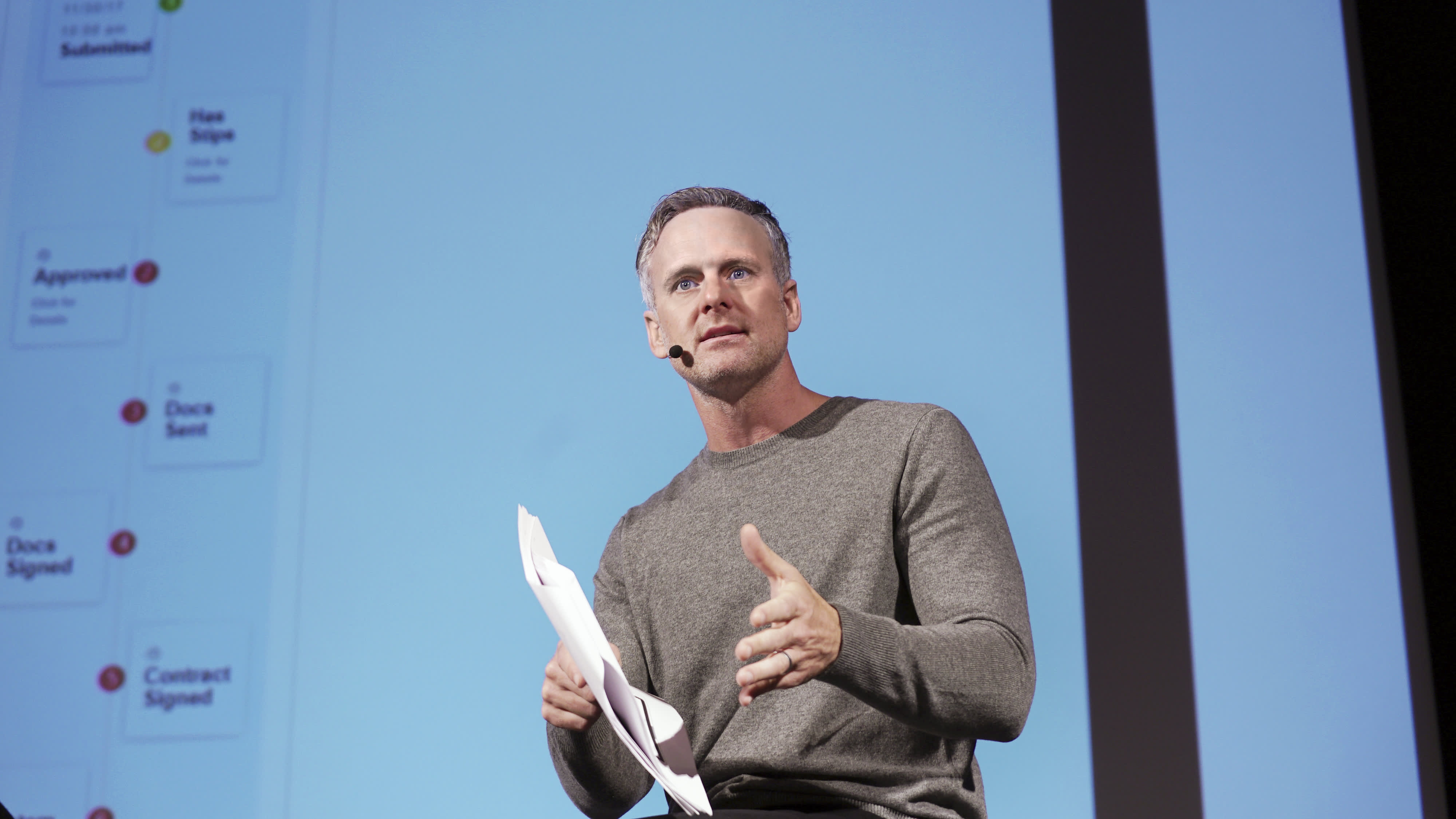 For his second act in solar power, entrepreneur Hayes Barnard is aiming to play a leading role in the booming solar market, but this time with less drama.

Barnard is founder and CEO of Loanpal, a company that has quietly emerged as the leading U.S. lender for residential solar installations. He started the business in 2017 after resigning as chief revenue officer at SolarCity, which had just been acquired by Tesla in a $2.6 billion deal that was contentious at the time and still faces shareholder litigation.

Tesla CEO Elon Musk redirected much of the SolarCity team to work on the Model 3 car, so Barnard went back to what he knew — trying to get more people to use sunlight to power their homes. Tanguy Serra, who spent three years as a top executive at SolarCity, joined him as Loanpal’s president.

While Tesla has ballooned into one of the world’s most valuable companies, Loanpal has stayed largely under the radar. It doesn’t spend money on advertising and has skirted venture capital. But demand is surging as consumers take advantage of plunging prices for solar panels and attractive government subsidies, which were just extended as part of the latest Covid relief package.

Coming off a year of rapid and profitable growth, Barnard disclosed to CNBC that Loanpal raised $800 million in equity over two rounds in 2020, including some cash to provide employee liquidity. The latest financing in late December valued the business at several billion dollars, Barnard said, though he wouldn’t be more specific. Revenue for the year doubled to $361 million, he said, and the company’s lending increased about the same amount to $400 million a month.

Loanpal, along with the rest of the solar industry, also learned a critical lesson over the past 10 months: Even during an economic crisis, people pay back their solar loans.

“The asset class performed incredibly well through Covid,” said Barnard, who moved with his wife and three kids from the Bay Area to Austin, Texas, over the summer. “We saw extremely low default rates.”

Loanpal works with large installers, retailers and independent sellers to make financing available at the point of sale through a mobile app. The loans average $30,000, can span up to 25 years and require no upfront payment. Loanpal earns a fee from its partners and sells the loans to banks, credit unions and investors.

“We’re connecting banks and financial institutions to homeowners who want to live a more sustainable life and contractors who want to go to work,” Barnard said.

Wall Street jumped on the trend, sending solar stocks Sunrun, Enphase and SunPower up 400% or more last year. The rally accelerated in November, as Joe Biden’s victory lifted optimism that the federal government would renew investment in alternative energy. Congress followed by extending the investment tax credit for two years to 2023, allowing borrowers to deduct about a quarter of the installation cost from their federal taxes.

Barnard had planned to avoid the public markets with Loanpal, but now he’s taking a close look. He’s watching not only the performance of solar stocks but also consumer lenders like Upstart and Affirm, which have soared since their recent IPOs. The banking relationships are already there. Goldman Sachs sponsored two Loanpal securitizations between November and January, totaling $908 million.

Loanpal leads the U.S. solar loan market with 41% share, followed by Sunlight Financial at 15%, according to research firm Wood Mackenzie. Earlier this week, Sunlight said it was going public through a special purpose acquisition company that will value the company at $1.3 billion.

Wood Mackenzie projected in December that the U.S. solar loan market would wrap up 2020 with 26% growth. Bryan White, a solar analyst at the firm said the financing space “is absolutely thriving right now” because people are working from home, giving them more incentive to save money on electricity.

“Residential solar has come out of this looking really good because of the savings offered to its customer base,” White said. “The typical customer going solar has a higher FICO and higher income and is much better off during the pandemic than folks who have lost their jobs.”

There’s still a ton of potential growth. White said that only about 2.6 million of a possible 66 million homes in the U.S. have switched to solar, meaning the market is 4% penetrated. In some states, solar has hardly arrived.

While financing options for residential solar products have been available for well over a decade, the loan market only opened up in the last few years. Previously, consumers would lease a system from a company like SunRun, SunPower or SolarCity (pre-Tesla acquisition), leaving ownership and the tax benefits to the supplier and its partner investors.

Barnard has seen all sides of it. In 2013, he sold his previous solar business, Paramount Solar, to SolarCity for $120 million and joined the company as chief revenue officer. When Tesla bought SolarCity three years later, the deal set off alarm bells because Musk was the biggest shareholder at both companies. He was chairman of SolarCity and his cousin, Lyndon Rive, was CEO.

Shareholders sued Tesla, accusing it of improperly valuing SolarCity. Tesla directors settled for $60 million early last year, leaving Musk as the lone defendant in the case, which has been delayed multiple times because of the pandemic.

Barnard was close enough to the matter to be deposed in the case, but he prefers not to talk about those days. He’s plenty busy building Loanpal, which grew to almost 900 employees last year from about 500 in 2019. Scott Sandell of venture firm NEA and WestCap’s Laurence Tossi, formerly CFO of Airbnb and Blackstone, led the investment rounds and joined Barnard on the board.

Sandell, who started at NEA in 1996, called Loanpal “one of the best businesses I’ve seen in my career.” In an email, he said the market has finally reached an “inflection point” where consumers can go green and save money doing it.

Now, Loanpal faces the challenge of growing responsibly at the current breakneck pace. The financial services graveyard is filled with mortgage and auto lenders who sacrificed credit quality for expansion and market share only to collapse when the economy turned south.

For Loanpal, that reality is particularly resonant because it’s trying to serve not only affluent borrowers but those further down the economic ladder. Loanpal’s cumulative losses from its 2019 securitizations are between 2.3% and 2.9% — notably higher than losses from the same time period for rivals Sunlight and Mosaic, according to Kroll Bond Rating Agency.

“I like the idea of allowing as many homeowners as possible to live a sustainable life,” Barnard said. Still, he said, “the performance of the asset class is the most crucial element of the entire industry.”

Unlike many of its top rivals, Loanpal is now extending credit to borrowers with FICO scores as low as 600, which is well into the subprime range, according to Experian. The average FICO score of a customer is still 742, with only 3% of loans in the the 600-649 range, according to the latest securitization.

Barnard said the loans are priced to reflect risk, and he’s betting his own money on it. Last year, Barnard created GoodFinch, an asset management firm that’s buying some of Loanpal’s securitized loans. The firm, which includes a “significant amount” of capital from Barnard, will purchase about $1 billion in loans this year, he said.

“We wanted to own some of these assets ourselves,” he said. “We had the opportunity to study the returns for many years and we see the margins that our capital markets partners are making.”

Barnard said that over the course of the year Loanpal plans to introduce products to further reduce monthly payments and offer additional flexibility.

There’s one more thing he wants to do in 2021 — change the company name. Barnard said there are a couple options, but he hasn’t made a decision and doesn’t want to share the names on his shortlist. He admitted that he’s torn about one that he really likes because the URL might just be too pricey.

Nominations are open for the 2021 CNBC Disruptor 50, a list of private start-ups using breakthrough technology to become the next generation of great public companies. Submit by Friday, Feb. 12, at 3 pm EST.