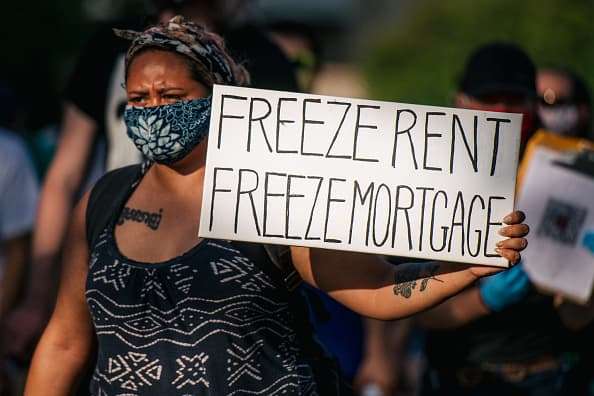 A demonstrator at a June 30 Cancel Rent and Mortgages rally in Minneapolis.

Mortgage delinquencies in November fell to their lowest level since the start of the coronavirus pandemic, though the number is still far higher than the rate a year earlier.

Just under 6% of all U.S. mortgages — 2.7 million homes — were in some stage of delinquency at the end of November, according to the latest reading by CoreLogic.

The largest share of troubled mortgages are those that are considered seriously delinquent, or more than 90 days past due. Just under 4% are in this deep trouble, compared with just over 1% the previous year, before Covid began its deadly spread.

“The consistent decline in serious delinquency since August is a sign of growing financial stability for families,” said Frank Martell, president and CEO of CoreLogic. “In addition to ensuring that homeowners stay in their homes, the decline in delinquency means fewer distressed sales, which is both a positive for individual households and the overall housing market.”

While the decline is certainly positive, the pandemic-driven distress in the mortgage market is far from over. The share of loans in government or private-sector mortgage bailout programs now appears to be stuck in place.

Some 5.35% of mortgages are in forbearance, according to the latest weekly read from the Mortgage Bankers Association. The vast majority of these, about 81% are in extensions of their initial three-month relief periods.

The government programs allow borrowers to delay their monthly payments in three-month increments. These payments can then be tacked onto the end of the loan or paid when the home is sold or the loan is refinanced.

The number of loans in forbearance had been dropping swiftly but now appears stuck in the low 5% range, signaling that most of these borrowers are unable to get current again. The number of those who are exiting forbearance is also being offset by newly troubled borrowers.

“While new forbearance requests increased slightly at the end of January, the rate of exits picked up somewhat but remained much lower than in recent months,” said Mike Fratantoni, MBA’s chief economist.

His concern is that the job market, while improving, is not even close to as healthy as it was a year ago.

“The proportion of long-term unemployed also remains troubling, with 4 million people who have been actively looking for work for 27 weeks or more. These are the homeowners who are likely to still be in forbearance and need additional support until the job market recovers to a greater extent,” Fratantoni said.

The government plans, as well as most private-sector bank plans, were designated as one-year programs in three-month increments. A large share of borrowers are coming up on that one-year expiration date in the next few months, and so far there has been no new guidance on what will happen to them.

There is an expectation in the industry that the Biden administration will look to extend the forbearance program for federally backed loans, but there has been no official word.