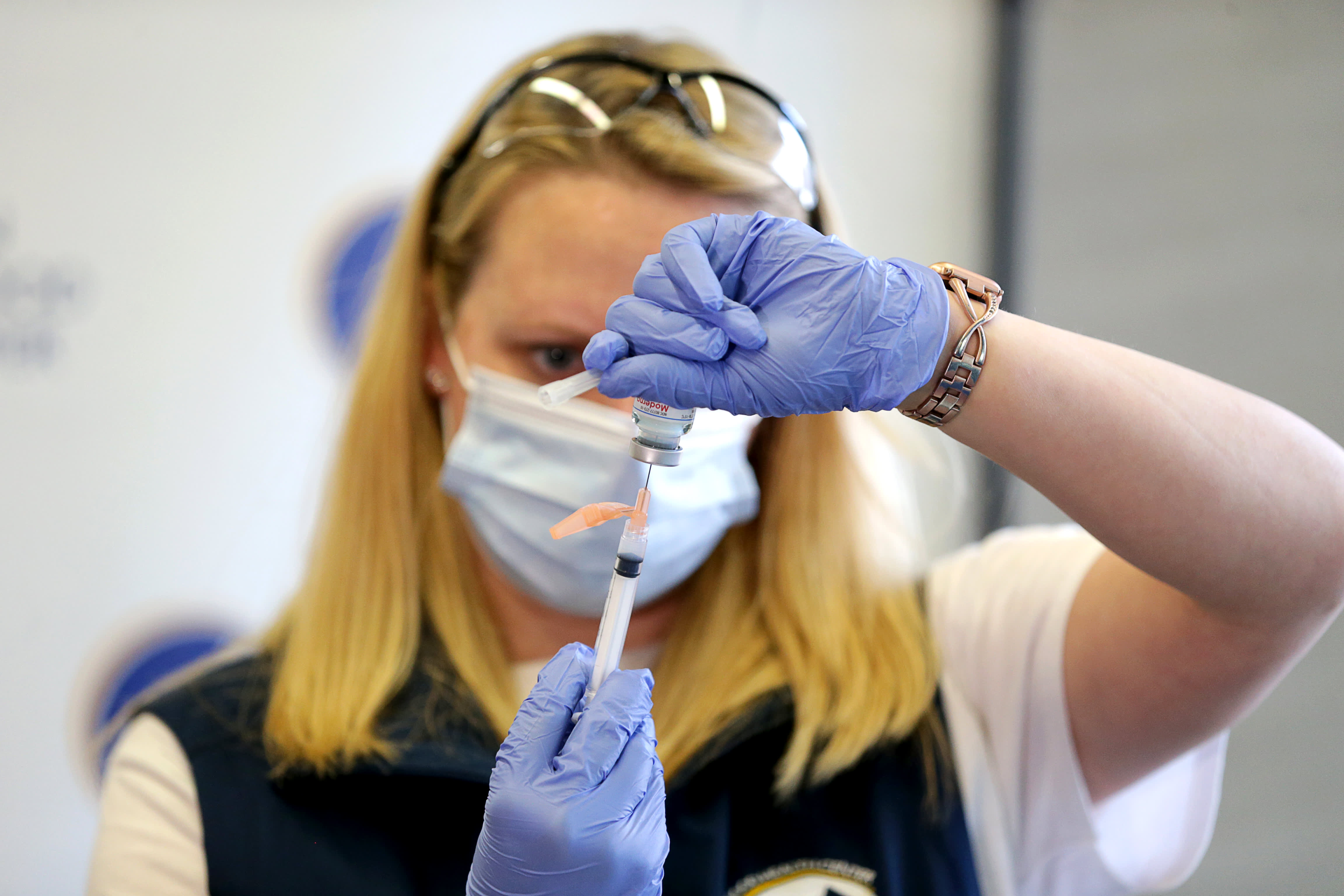 Courtney Senechal, RN, prepares to give the second Moderna vaccine shot for Covid-19, at the East Boston Neighborhood Health Center in Boston on Jan. 19, 2021.

Barely more than one in five small business owners (22%) will require their employees to get Covid-19 vaccines when they become available, according to the latest CNBC|SurveyMonkey Small Business Survey. Twice as many (42%) say they won’t mandate vaccinations.

Whether to require workers to be vaccinated as soon as possible has become a controversial topic in the business community. With little guidance coming from the federal government, business leaders have been left to make decisions on their own.

Some business owners view vaccinations as the key to a full reopening, some companies are even offering incentives to workers who get inoculated, while others want to avoid overstepping their bounds. The new survey, conducted January 25-31 among 2,157 small business owners nationwide using SurveyMonkey‘s online platform and based on its survey methodology, reveals a particular hesitancy among the small business community, who have already spent the last year struggling to adapt as the pandemic rolls on.

Barely more than half of small business owners (55%) say they could continue operating for more than a year under the current business conditions. For these small businesses, widespread vaccine adoption may be the key to a full reopening.

While small business owners overall have limited enthusiasm for vaccination requirements, certain industries appear to be more open to the idea than others, especially those that rely on close, person-to-person interactions between customers and staff.

Restaurants, hospitality most likely to vaccinate

Small business owners in the accomodation and food services industry — e.g. restaurants, bars, casinos, B&Bs, caterers — are some of the most likely to report a willingness to require their workers to get vaccinated. But, there isn’t widespread enthusiasm even among this group.

Small business owners in the accommodation and food services industry are some of those who’ve been hit hardest over the course of 2020, and that continues through today. Just 42% say their business has remained open throughout the pandemic, below the overall average of 54%. Fewer than half (45%) say they could survive for more than a year under the current business conditions.

Some big players in the industry have already stepped up to push their workers to get vaccinated, whether they are requiring them to do so or just giving them strong encouragement. Marriott and Chipotle have both urged their workers to get vaccinated, but neither are making it a requirement. Darden Restaurants, which owns chains like the Olive Garden and Outback Steakhouse, is going so far as to pay workers for getting vaccinated.

By encouraging rather than requiring their workers to get vaccinated, business owners are trying to walk a fine line. Polls have consistently shown that in this increasingly partisan environment, any statement on vaccinations will be viewed through a partisan lens.

In the latest survey results, small business owners who identify as Democrats are more than twice as likely as those who are Republicans to say they will require their employees to get the Covid-19 vaccine (39% vs. 14%). That divide is bigger than any other gap, including by industry, number of employees, or business type.

That gap also lines up with similar disparities between Republicans and Democrats: in their support for workers to be required to be vaccinated and in their own willingness to get vaccinated.

In Gallup’s latest tracking survey, 91% of Democrats but just 51% of Republicans say they would be willing to be vaccinated against Covid-19 now if they could get the vaccine free of charge.

In our last CNBC|SurveyMonkey Workforce Survey, conducted in November among more than 9,000 workers nationwide, 75% of Democrats said they supported mandatory vaccinations at their workplace once they become widely available, compared with just 41% of Republicans.

Finally, recent polling from the Kaiser Family Foundation has exactly twice as many Democrats as Republicans saying they’ve already gotten the vaccine or plan to get it as soon as possible (64% vs. 32%). Their poll shows a more fundamental divide by partisanship, too: 71% of Republicans say the decision to get vaccinated is “a personal choice,” while an equal and opposite 70% of Democrats say the decision to get vaccinated is “part of everyone’s responsibility to protect the health of others.”

At its root, this is the same question facing small business owners as they weigh competing demands: allowing their employees to choose what’s best for their own health versus making an executive decision about what’s best for the company as a whole.

On Thursday, Comcast NBCUniversal launched Plan Your Vaccine, a nationwide awareness campaign, website and interactive tool that will provide the latest news and information about when and where people can receive the COVID-19 vaccine.