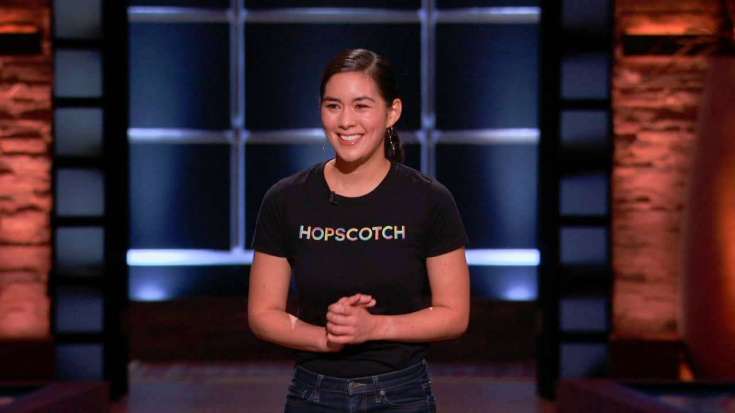 On Friday, Samantha John pitched Hopscotch, an app that teaches kids how to code by building games, to the Sharks on ABC’s “Shark Tank.”

Over the last nine years, John turned her passion for programming into a profitable business.

But “when I was a kid, I never thought that coding was for me. I was like, ‘Computers? Those are for boys,'” John said on Friday’s episode of “Shark Tank.”

It wasn’t until her senior year at Columbia University in 2009 that John began to love programming.

“[When] I took my first computer science class, I was like, ‘Why didn’t I know that programming was so fun and creative and interesting?'” she said.

In 2012, John launched Hopscotch, offering her app for free. Within its first week, Hopscotch had 20,000 downloads.

Through Hopscotch, “young entrepreneurs [can] build and run their first business on the internet, all from their mobile device,” John told the Sharks. “They use kid friendly programming language that I invented to make incredible games. By selling those games, they can turn their creations into real currency [while] learning real coding skills.”

And now, John said Hopscotch has about 200,000 active users each month.

Hopscotch, an app that teaches kids to code.

“You were dominating for kids’ programming language at the time,” Cuban recalled. “When it comes to kids and school, there are some other alternatives, but Hopscotch is the go-to name,” he told the other Sharks.

Along with Cuban, the rest of the Sharks were also impressed with John and Hopscotch, but were shocked by her ask for a $400,000 investment in exchange for just 4% equity, which would value the company at $10 million.

But Hopscotch would be worth the high investment and low stake, John said.

While the app started completely free in 2012, John introduced an option for customers to subscribe for additional features in 2015, and now, it has 6,200 subscribers, she said. It costs $7.99 per month or $79.99 per year to subscribe.

As a result of the subscription model, “we’re profitable,” John said. “We’re not burning cash, but we’re not really making cash.”

That’s why she wanted a Shark – “it’s not really the right business model for Hopscotch. We want a little bit more capital so we can get rid of the paywall.”

Cuban, with his prior experience on Hopscotch, felt connected to the app and easily envisioned what he could do with it in the future.

“My foundation, the Mark Cuban Foundation, [does] something called the AI Bootcamp. We introduce kids, high school kids primarily, in minority communities [to AI],” he told John. “I could work with you to do a coding camp for kids [on] how to make money with your phone, how to create games to make money.”

(Artificial intelligence plays a large role in many of the companies Cuban invests in.)

The deal was surreal for John, she said during the episode.

“When Mark Cuban said he looked up to me, my heart stopped. It was such an incredible moment. And the fact that we got a deal with him, I’ve lost all my words.”

Check out: The best credit cards for building credit of 2021