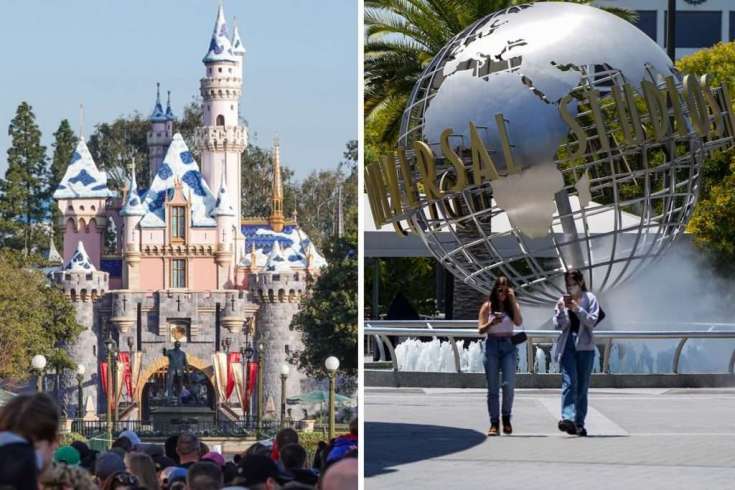 In March, Michael Afram’s transportation company had its best sales month since California closed down last year due to the pandemic. As the state loosened some of its coronavirus restrictions and vaccinations rates increased, Karmel Shuttle Service has started to recover.

“But to give you an idea of where we stand, the revenue we booked for the entire month of March 2021 equates to one day of March 2020 prior to shutdown,” Afram said. “So I guess you can consider us one-thirtieth of where we need to get back to.”

Before the pandemic, Afram’s business averaged 450 to 500 rides a day in the area between Los Angeles and San Diego. A hefty percentage of its destinations were Disneyland, Universal Studios and SeaWorld San Diego.

With theme parks in California shuttered and air travel demand at a fraction of what it was in 2019, Afram’s business took a massive financial hit. With Universal Studios reopening Friday and Disneyland set to open its gates on April 30, businesses like Afram’s are starting to see a small rebound.

However, a full recovery will be slow. Particularly, as these parks are forced to limit capacity and can only admit guests who already reside within the state.

While bookings in April and May are strong, Afram said he doesn’t foresee his business making a full recovery until the second quarter of 2022.

“We weathered the storm and are starting to see a light at the end of the tunnel,” he said. “Unfortunately, [we] witnessed and suffered so much destruction and desperation along the path to get to this point.”

Around 50% of Afram’s business was in the Anaheim resort area where Disney’s two California parks and its Downtown Disney shopping center is located. His shuttle company traveled to local airports, hotels, theme parks, restaurants and other local tourist destinations in the area.

The other 50% included the greater Orange County area as well as Los Angeles, where Universal Studios is located, and day trips to San Diego.

“The impact of both Disneyland and Universal Studios to our local economy is significant for all of our small businesses and surrounding industries,” said Assemblywoman Sharon Quirk-Silva, a Democrat, who represents the 65th California Assembly District, which includes northern Orange County.

“There will undoubtedly be a surge in economic growth throughout Orange County as they reopen,” she said

A slow and steady rebound

Direct travel-related spending in Californian neared $145 billion in 2019, a 3.2% increase from the year prior, according to a report from Visit California, a nonprofit tourism group.

In fact, $6 out of every $10 spent at locally was attributable to residents of other states and countries in 2019.

“Of course, LA County’s 10 million residents support this sector and its jobs, as we frequent our local theme parks and hospitality businesses,” she said. “And LA also welcomes approximately 50 million visitors annually, and their spending is a huge driver of economic activity as well.”

“We are still far below pre-pandemic tourism levels, so we see theme park reopenings as a very public signal that things are getting back to normal in LA and traveling to Los Angeles is starting to look practical and enjoyable again,” she said.

For Roscoe’s Chicken and Waffles, a restaurant chain with seven locations in California, including one within the Disneyland Resort area, local restrictions forced it to shut its doors to indoor dining. It stayed afloat during the pandemic by offering takeout and delivery and because it owned the buildings its restaurants are located in.

Diane Vara, creative director for the company, said the business was able to make around 75% of what it did 2019 during the last year, but is looking forward to the influx of business that will come as the theme parks and state open up.

Vara noted that Roscoe’s Inglewood location, which is near the Los Angeles International Airport, often draws travelers, who arrive to the shop, luggage in tow, straight after their flights land.

“This is great for us,” she said of the state reopening.

Of course, Disney and Universal also benefit from being able to reopen.

Last year’s shutdown led Disney to lay off tens of thousands of workers and slashed an important source of revenue for the media company. The parks, experiences and consumer products segment accounted for 37% of the company’s $69.6 billion in total revenue in 2019, or around $26.2 billion.

“That was probably one of the hardest things I have personally had to do in my career,” said Josh D’Amaro, chairman of Disney’s parks, experiences and consumer products division, about the layoffs in an interview with CNBC last week. “I’m very passionate about the cast members here. I think they are the real reason that people come to these parks.”

D’Amaro said that when the Disneyland Resort opens at the end of April, the company will have called back more than 10,000 cast members. To start, Disney’s parks will operate at around 15% capacity, and only be open to California residents. Mask-wearing and social distancing will be required for guests visiting the park.

When its California park reopens, Universal will also require guests to wear masks and adhere to social distancing guidelines.

“During my visits to Downtown Disney … I would hear many of our constituents tell me that they felt safer at the theme parks than their own grocery store,” said Quirk-Silva. “With handwashing stations, temperature screening, and helpful employees enforcing safe distancing our residents have supported our efforts in reopening our theme parks.”

If the reopening of Florida’s theme parks is any indication, there’s plenty of pent up demand.

Guests in The Wizarding World of Harry Potter attraction as Universal Studios Hollywood is welcoming guests back to the Theme Park Friday, April 16 to experience the thrill rides and attractions.

So far, there haven’t been any public reports connecting the Orlando parks tcoronavirus outbreaks.

“We continue to provide an amazing entertainment experience,” said Brian Roberts, chairman and CEO of Comcast, during the company’s January earnings call. “And our guests are responding, as confirmed by our steadily increased attendance and our most recent financial results.”

“What we saw this fourth quarter, especially in Orlando, gives us even more conviction in the momentum that our theme parks will experience when we reach a sustainable recovery,” he said at the time.

While Florida Gov. Ron DeSantis permitted theme parks to return to normal operations with limited physical distancing protocols, Disney and Universal have continued to cap attendance and enforce mask-wearing, among other guidelines.

California legislators are looking to have the state reopened more fully in June, however it is unclear how that will impact theme park capacity limits. It also remains to be seen when California will allow nonresidents to purchase tickets to its parks.

Disclosure: Comcast is the parent company of NBCUniversal and CNBC.