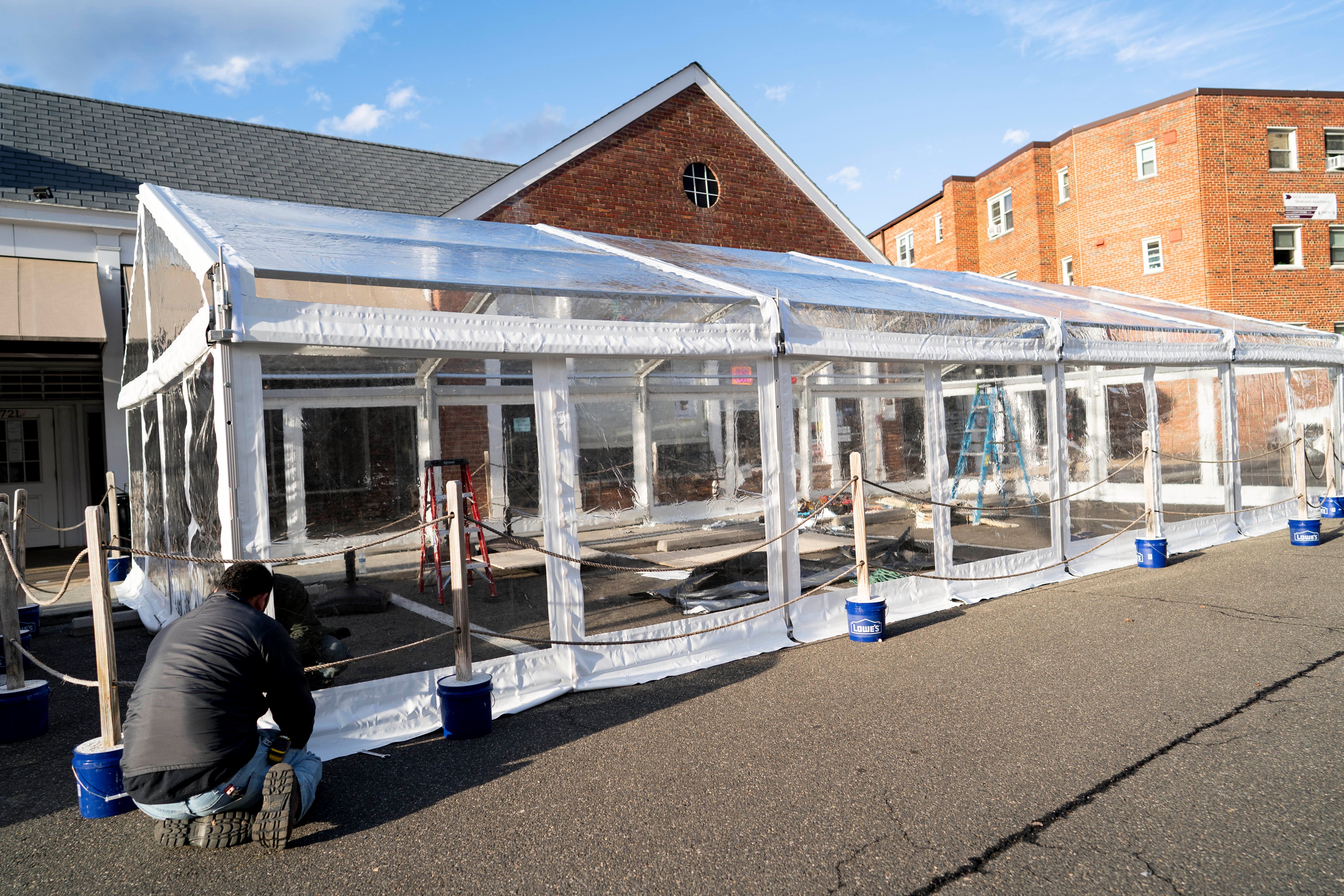 Outdoor dining tents under constructions in Arlington, Virginia, on Feb. 5, 2021.

More than 300,000 Americans lost unemployment benefits prematurely during the Covid pandemic, according to a study published Tuesday by the California Policy Lab.

That’s due to a way many states account for unemployed workers, which has understated the severity of the recession, the analysis said.

State unemployment systems have an automatic mechanism that pays additional aid to the long-term unemployed during periods of mass joblessness.

These Extended Benefits programs can pay up to 20 extra weeks of aid, on top of the typical six months of regular state benefits.

But a faulty design has led 33 states to end their Extended Benefits programs since the fall of 2020, even as long-term unemployment continued to spike, according to the report.

Nearly 315,000 people lost benefits as a result, according to a conservative estimate in the analysis.

“The pandemic has exposed flaws in how these triggers are currently designed, which have led to the removal of automatic aid in many states when their workers are experiencing rising unemployment durations,” said Alex Bell, Thomas Hedin, Geoffrey Schnorr and Till von Wachter, who co-authored the report.

More from Personal Finance:
Workers are a year into collecting unemployment. It’s causing problems
Here’s who could still be waiting and eligible for a $1,400 stimulus check
Consumer watchdog issues policy to strengthen eviction moratorium

States automatically pay extended aid based on the “insured unemployment rate.” (Some states use an alternative measure.)

Most states offer Extended Benefits when the insured unemployment rate exceeds 5%. All states but South Dakota paid these benefits at some point during the pandemic.

It doesn’t count long-term unemployed workers getting aid via extensions, like the Extended Benefits program or any federal programs created by the CARES Act. That means it can “overstate improvements in labor market conditions,” the co-authors wrote.

As a result, many states’ insured unemployment rates have fallen below the 5% threshold, ending Extended Benefits in those areas.

In states like Alabama, Maryland, Minnesota, Ohio, South Carolina and Virginia, a large share of people (roughly 20% to 30% of all workers collecting unemployment benefits) lost aid once the programs ended, according to the California Policy Lab.

Just 16 states were still paying those benefits as of March 27, according to the U.S. Department of Labor.

However, terminating extended aid in this manner is counterintuitive during high periods of long-term unemployment, the report authors claimed.

About 1 in 4 unemployed workers in March had been jobless for at least a year, according to the Bureau of Labor Statistics.

“While several unique aspects of the Covid-19 crisis have exacerbated the issue — including high rates of long-term unemployment, higher propensity for the unemployed to claim benefits and a high utilization of extended benefit programs — this design issue hinders the ability of the UI program to respond to any severe downturn,” they wrote.

However, some who were kicked off Extended Benefits may have since been able to collect aid through temporary federal programs. The American Rescue Plan extended aid through Labor Day.

Officials in Michigan, which ended its Extended Benefits program on Saturday, said that’s likely the case for its residents.

“Fortunately, with the federal extensions that were implemented on March 27, claimants who were on the Extended Benefits program most likely will be able to receive benefits through other federal programs such as Pandemic Emergency Unemployment Compensation or Pandemic Unemployment Assistance,” Liza Estlund Olson, acting director of the Michigan Unemployment Insurance Agency, said.

About 613,000 of the roughly 17 million people collecting unemployment benefits were doing so via Extended Benefits at the end of March, according to the Labor Department.