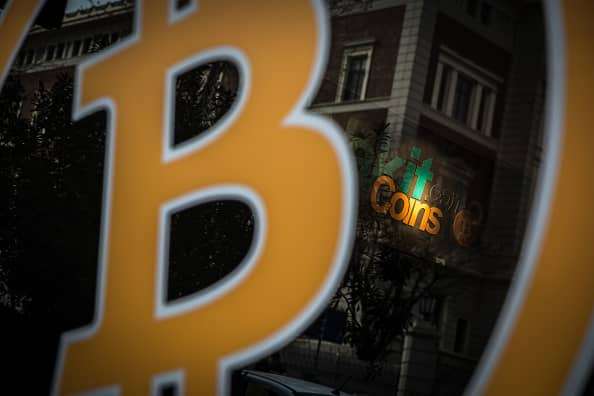 A Bitcoin sign is seen at the entrance of a cryptocurrency exchange office on April 16, 2021 in Istanbul, Turkey.

LONDON — A second cryptocurrency exchange has collapsed in Turkey amid a crackdown on the industry.

The platform, Vebitcoin, said in a brief statement on its website that it has ceased all activities after facing financial strain and that it would update clients on the situation as soon as possible.

Turkish authorities have blocked Vebitcoin’s domestic bank accounts and detained four people as part of a probe into the exchange, Reuters reported Saturday. According to CoinGecko data, Vebitcoin had almost $60 million in daily trading volumes prior to its collapse.

Some Turks have turned to crypto as a way to protect their savings from skyrocketing inflation and the weakening of its currency, the lira. But there have been growing calls for regulation of the market due to concerns around fraudulent activity.

Earlier this month, Turkey’s central bank banned the use of digital assets for payments. And President Recep Tayyip Erdogan has called for swift regulation, warning of pyramid schemes emerging in the crypto markets.

Crypto investors believe the industry has matured significantly in the last three years, with more institutional investors and corporate backers like Tesla entering the market. Bitcoin’s price is up around 80% since the start of the year, even after a sharp plunge last week that saw the entire crypto market shed more than $200 billion in a day.

That hasn’t stopped skeptics warning of a potential bubble. Some 74% of those who responded to a recent Bank of America Fund Manager Survey said they see bitcoin as a bubble. And even industry insiders are warning a broader regulatory clampdown may be on its way.