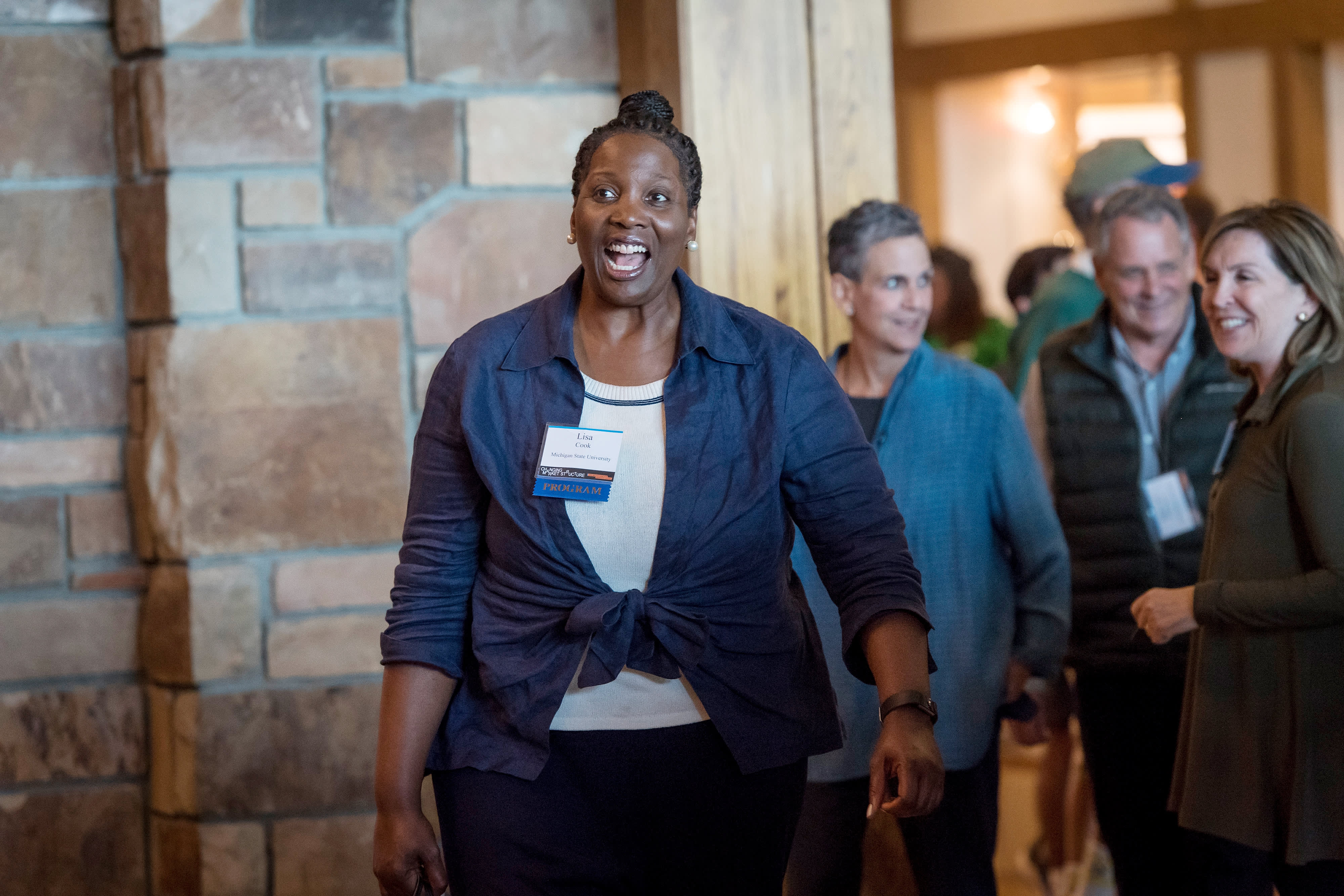 Lisa Cook, associate professor at the Michigan State University, arrives for dinner during the Jackson Hole economic symposium, sponsored by the Federal Reserve Bank of Kansas City, in Moran, Wyoming, on Thursday, Aug. 23, 2018.

The Democratic chairman of the Senate Banking Committee sees economist Lisa Cook, an advocate for remedying racial and gender income inequality, as his top choice to fill the remaining vacancy on the Federal Reserve’s governing board, people familiar with the matter told CNBC.

If nominated and confirmed, Cook would be the Fed board’s first Black woman.

A staffer familiar with Sen. Sherrod Brown’s thinking said the Ohio lawmaker supports Cook’s candidacy for the Fed’s Board of Governors based on her expertise, research, and lived experience as a woman of color.

Cook is a professor of economics and international relations at Michigan State University. She is also a member of the steering committee at the Center for Equitable Growth, a progressive Washington-based think tank that counts several of President Joe Biden’s top economists among its alumni.

Other congressional staff cautioned that while Cook may be a favorite among committee leadership, it’s still early in the vetting process and that some Democrats still need to meet with potential candidates before making a final decision.

Staff spoke to CNBC on the condition of anonymity because the Fed deliberations are private and ongoing.

Cook’s confirmation is not assured, however. With a 50-50 split in the Senate, Cook will need to win the support of every Democrat in order to be confirmed to the seat. The top Republican on the Banking Committee, retiring Pennsylvania Sen. Pat Toomey, has yet to weigh in publicly on any board seat candidates.

A representative for Toomey’s office did not respond to CNBC’s request for comment.

Still, Brown’s early backing may prove invaluable to Cook in the months ahead as the White House considers whom to nominate to the central bank’s governing committee.

Fed governors carry outsized clout at the central bank as voters at every regular Federal Open Market Committee meeting, the body that decides whether to adjust interest rates in the U.S. economy. The full term of a governorship is 14 years.

While the decision on whom to nominate rests with the president, Cook’s background would likely appeal to a Biden administration focused on building the middle class, rectifying racial inequities and improving the nation’s health care and infrastructure.

Earlier this year, Cook wrote an essay about the need to bring more women and people of color into the science-based, innovation workforce. Cook predicted, for example, that if women were equally represented in engineering and innovation jobs, it could increase U.S. per capita GDP by 2.7%.

This kind of thinking underscores a central pillar of the emerging Biden doctrine: That government should help to open the doors for women and people of color in lucrative and growing fields, such as green energy technology, that have traditionally been dominated by men.

Neither the White House nor Cook responded to CNBC’s request for comment.

The Biden administration is in the midst of building support in Congress and across the country for Biden’s domestic agenda, specifically for two massive pieces of legislation that would fundamentally reshape parts of the U.S. economy.

The American Jobs Plan, an infrastructure-focused proposal, would invest $2.3 trillion over a decade to rebuild hard infrastructure but also to fund scientific innovation, pay home health aides and build half a million electric vehicle charging stations.

The White House hopes to fund much of that spending through its Made In America tax plan, a sweeping revision of the tax code that seeks to expand the IRS in order to crack down on tax evasion, end the stepped-up basis to assess inherited capital gains, and institute a global minimum corporate tax rate of at least 15%.

The Biden team has also proposed raising the U.S. corporate rate to somewhere between 25% and 28%. He wants households that make over $1 million per year to pay more on capital gains and to end the carried-interest loophole.

Cook is not the only progressive economist under consideration for the vacant seat. Bloomberg News reported in February that the administration was also looking at William Spriggs, the chief economist of the AFL-CIO, the biggest federation of unions in the country.

The governor’s post is vacant because Biden’s predecessor, President Donald Trump, failed to drum up enough support for his preferred nominee, Judy Shelton. She came under scrutiny for having advocated, years earlier, for a return to the gold standard.

The first term of the current Fed chairman, Trump appointee Jerome Powell, expires in February of next year.