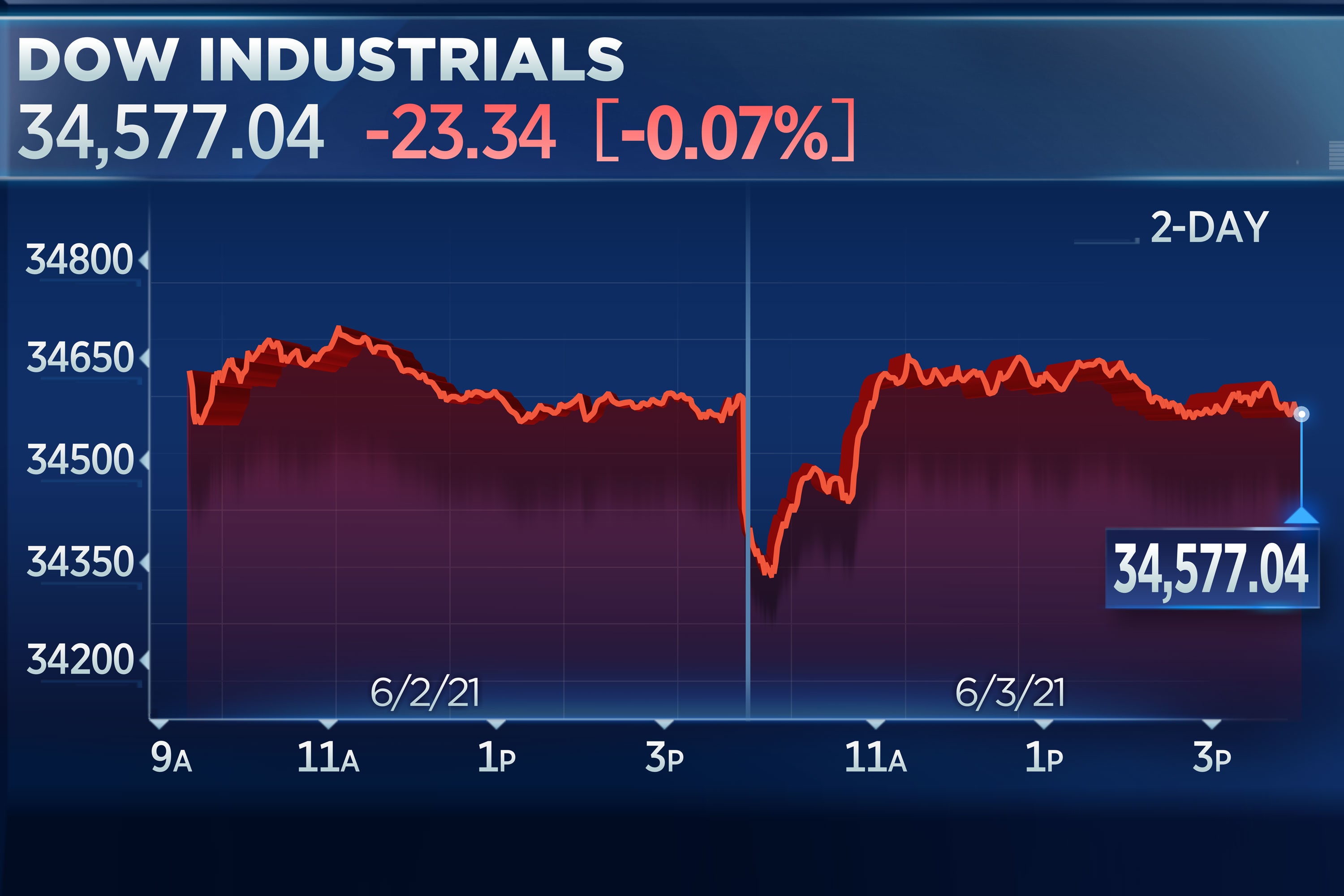 Cyclical stocks lifted the Dow Jones Industrial Average off its low on Thursday to close the session near the flatline, while better-than-expected labor market data helped support sentiment.

The benchmark S&P 500 sits about 1% from its all-time high reached earlier last month, but it has been stuck around these levels for about the last two weeks. The S&P 500 is up more than 11% this year so far.

Merck and Dow Inc. were the two best performers in the 30-stock benchmark, both rising more than 2%. Consumer staples and utilities were the biggest gainers among 11 S&P 500 sectors, while consumer discretionary and tech weighed on the broader market, falling 1.2% and 0.9%, respectively.

Shares of General Motors climbed nearly 6.4% after the company said it expects its results for the first half of 2021 to be “significantly better” than its prior guidance.

On the data front, private job growth for May accelerated at its fastest pace in nearly a year as companies hired nearly a million workers, according to a report Thursday from payroll processing firm ADP.

Meanwhile, first-time claims for unemployment benefits for the week ended May 29 totaled 385,000, versus a Dow Jones estimate of 393,000. It also marked the first time that jobless claims fell below 400,000 since the early days of the pandemic.

“With ADP knocking it out of the park, and jobless claims breaking that 400k barrier—a pandemic low—all eyes will be on the larger jobs picture tomorrow,” said Mike Loewengart, a managing director at E-Trade. “With seemingly all systems go on the jobs front, the economy is flashing some very real signs that this isn’t just a comeback—expansion mode could be on the horizon.”

The market may be on hold before the release of the jobs report Friday, which is likely to show an additional 671,000 nonfarm payrolls in May, according to economists polled by Dow Jones. The economy added 266,000 jobs in April.

Investors continued to monitor the wild action in meme stocks, particularly theater chain AMC Entertainment. The stock tumbled as much as 30% after practically doubling in the prior session, but shares cut losses after movie theater chain said it completed a stock offering launched just hours ago, raising $587 million. The stock ended the day about 18% lower.

Reminiscent of what occurred earlier this year, retail traders rallying together on Reddit triggered a short squeeze in AMC earlier this week. On Wednesday, short-sellers betting against the stock lost $2.8 billion as the shares surged, according to S3 Partners. That brings their year-to-date losses to more than $5 billion, according to S3. Short sellers are forced to buy back the stock to cut their losses when it keeps rallying like this.

The meme stock bubble in GameStop earlier this year weighed on the market a bit as investors worried it meant too much speculative activity was in the stock market. As losses in hedge funds betting against the stock mounted, worries increased about a pullback in risk-taking across Wall Street that could hit the overall market. AMC’s latest surge did not appear to be causing similar concerns so far.