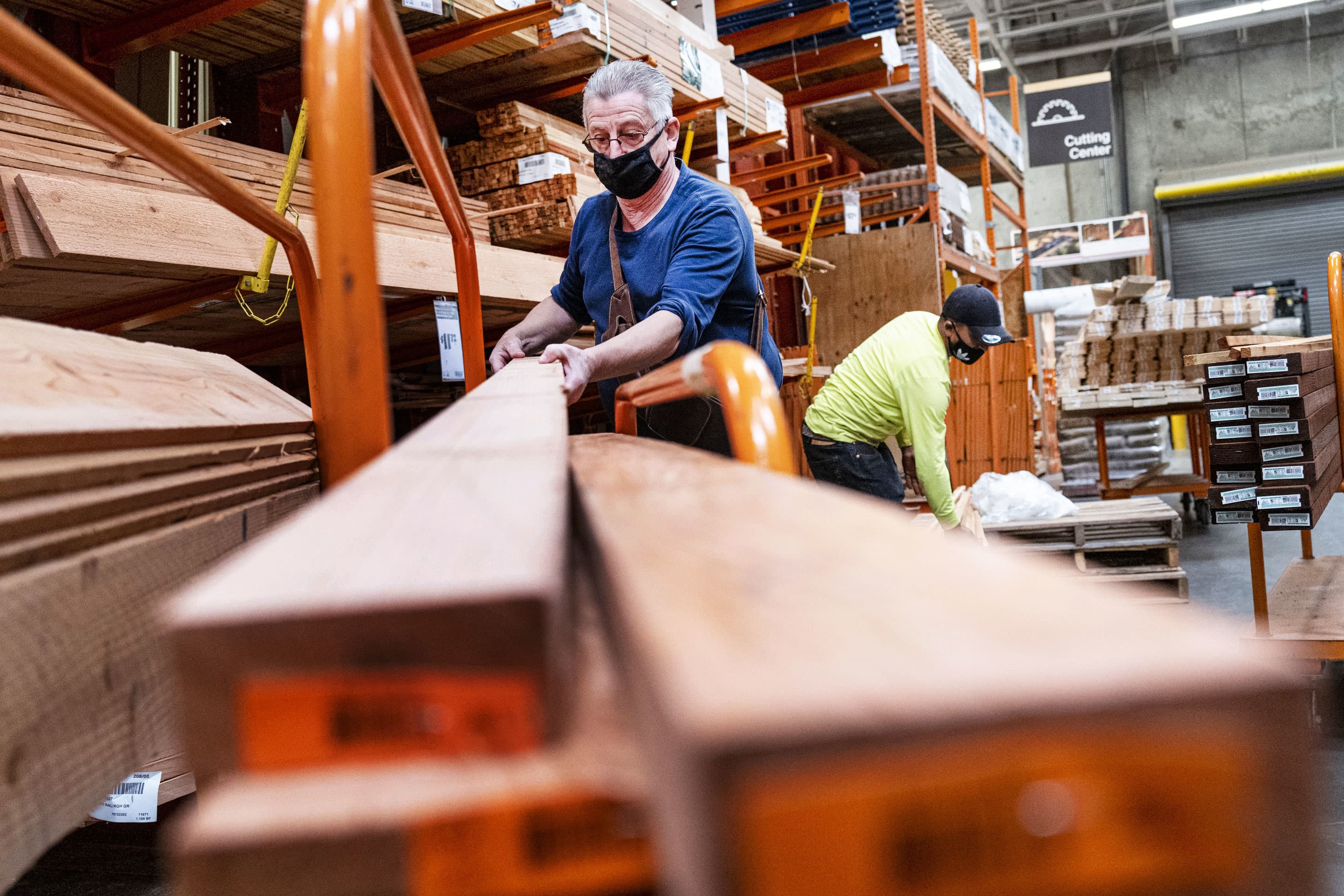 Inflation has been warming up this spring, and it’s expected to hit historical levels for the month of May.

The consensus forecast for the core consumer price index, which excludes food and energy, is 3.5% on a year-over-year basis, according to Dow Jones. That’s the fastest annual pace in 28 years.

Economists expect both core and headline CPI rose by 0.5% in May. Headline CPI is expected to jump 4.7% year-over-year, the highest rate since sky high energy prices spiked inflation readings in the fall of 2008.

“It will be hot. It could be up to 5%,” said Diane Swonk, chief economist at Grant Thornton. “The worst of the heat is going to be the second quarter in terms of headline. It will be interesting to see what it looks like when you strip out the extremes. I think we’re still going to have a warm summer when you have surge pricing kicking in for everything from airfares to hotels.”

A customer wearing a protective mask loads lumber onto a cart at a Home Depot store in Pleasanton, California, on Monday, Feb. 22, 2021.

May CPI is expected at 8:30 a.m. ET Thursday and comes as investors are debating whether the period of rising prices is transient, as the Fed believes, or more pervasive and persistent. If it’s the latter, the concern is the central bank would then be forced to back away from its easy policies that have helped keep interest rates low, boosted liquidity and provided fuel for the stock market’s gains.

The last time the core CPI was above the consensus expectation of 3.5% was February 1993.

“I am worried about rent and owners’ equivalent rent because it should go up. It had decelerated,” she said. Shelter is more than 30% of CPI, and rent costs have bottomed in some cities, Swonk added. “The issue is it could have longer legs and keep overall inflation measures buoyed more than people expect.”

The Fed has said it would begin the first phase of easing when it believes the economy and labor market is strong enough. Central bank officials have said they will tolerate inflation in an average range around their 2% target.

Some strategists expect the Fed to begin talking about tapering its $120 billion a month in late August when it meets at the Jackson Hole Economic Symposium. It is then expected to wait several months and begin to pare back purchases in December or early next year.

That would then lead to a long period of the Fed slowly reducing its bond purchases before it actually moves to raise interest rates. Most market pros do not expect the Fed to hike interest rates before 2023.

Going beyond the expected price increases

Wells Fargo bond strategists say they will be looking at the data for trends that go beyond the obvious price hikes associated with the economic reopening.

“Airfares, hotels and event admissions all registered big price increases and contributed to the spike in CPI inflation in April,” they wrote in a report. “But these categories are merely recovering declines seen last year, and the Fed is unlikely to be swayed if their prices continue to accelerate. Rent, owners’ equivalent rent and medical care services (collectively 50% of the core CPI basket) inflation are muted.”

Grant Thornton’s Swonk said the surge of inflation is being driven by pent-up demand, with consumers rushing to return to normal.

“The biggest thing I worry about longer term is whether or not what we’re seeing a reaction to friction upon re-entry, before you hit the cold waters and reach splashdown, it gets hot,” she said.

Economists are carefully eyeing wages, which have been rising. They do not expect the picture to become clear for several months as workers are expected to come back to the labor force. The 559,000 jobs added in May was lower than expected, but the pace of hiring is expected to pick up as September approaches when federal unemployment benefits run out and schools reopen, allowing parents to return to work.

Inflation: Good to some degree

For the stock market, some inflation is good, especially for those companies that can meet rising costs with higher prices for goods. Inflation becomes negative when it gets too hot and erodes margins.

“These near-term readings are not going to tell us anything about whether the inflation readings are going to be anything but transitory,” said Ron Temple, head of U.S. equities and co-head of multi-asset investing at Lazard Asset Management. He said it will be several more months before it’s clear whether the period of higher prices is temporary.

Temple said a hot CPI reading — one that’s much higher than expected — would be a negative for stocks and bonds. Bond yields rise when prices fall.

“I think inflation is the thing people want to be afraid of … I think it’s a misplaced fear. I think the worst thing we could have is deflation,” he said.

Temple said he does not expect a few months of rising inflation to destabilize the stock market, but he said there are bond market pros who think the Fed could move sooner on unwinding its bond program.

“I think the Fed will keep its nerve. They’ve made it clear. There’s been a consistency of commentary. I think [Fed Chairman] Jay Powell’s done a good job discussing ‘transitory,'” he said.

Market-based inflation expectations have been falling recently, and the 10-year Treasury yield fell below the key 1.5% Wednesday.

George Goncalves, head of U.S. macro strategy at MUFG, said investors were looking for an explanation for the surprise drop in yields, but he said it could simply be that the market is not looking for the pace of inflation or economic growth to stay at current levels.

“It’s got to be short-covering. I think what we’re experiencing is a rethinking of the narrative at the same time,” he said. “We’re living through the peak of the activity, the peak of the inflation and markets are supposed to be forward looking.”