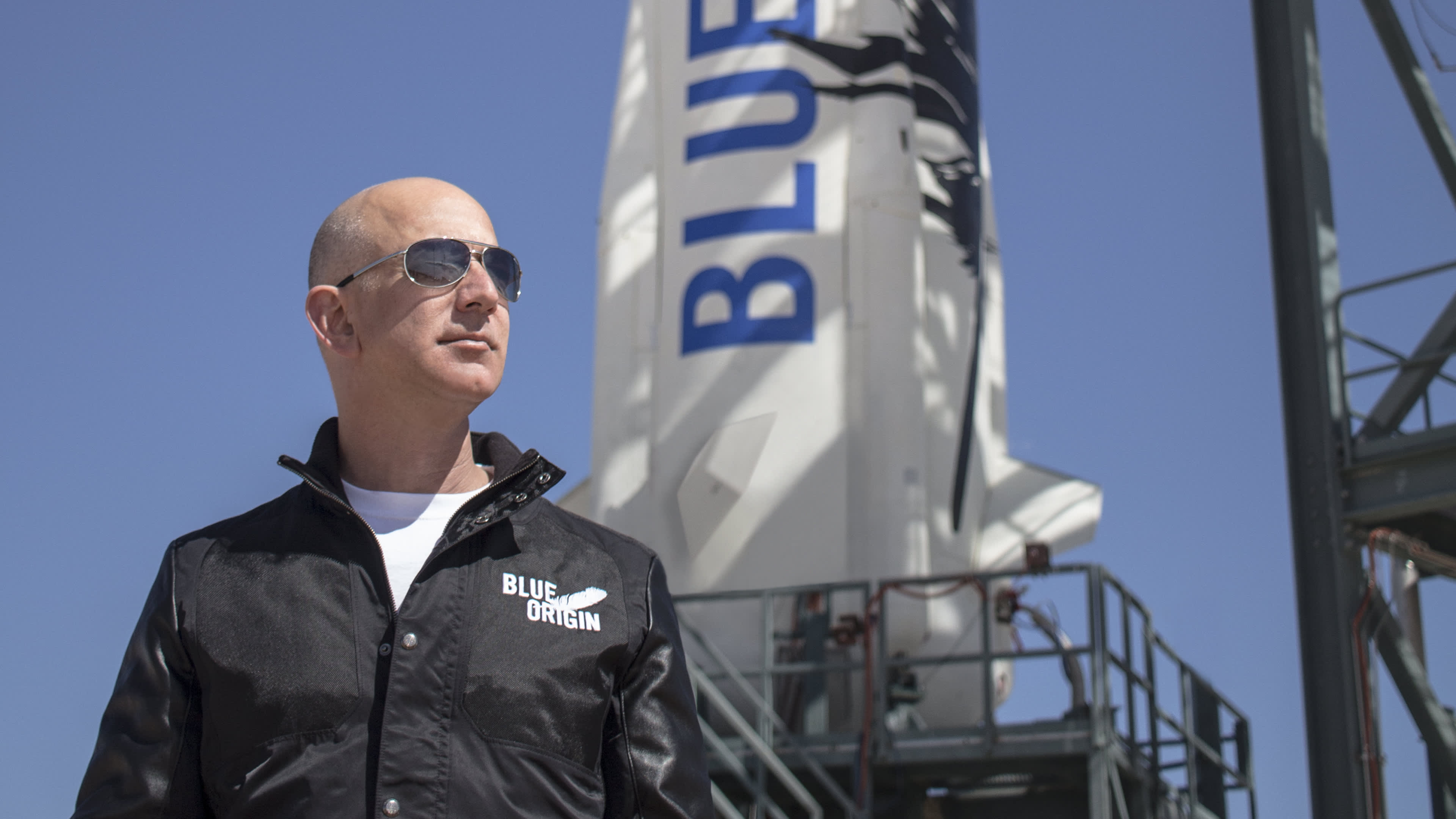 With less than a month to go before Jeff Bezos embarks on his “greatest adventure” with a trip to space, more than a few people here on Earth are making it known they’d prefer it if the wealthiest man on the planet takes a one-way trip and remains in orbit.

A petition on Change.org entitled “Do not allow Jeff Bezos to return to Earth” launched in early June, after Bezos announced his plans to fly on next month’s first passenger spaceflight of his company Blue Origin, and the petition already has more than 122,000 signatures as of Friday afternoon. Bezos has said he’s dreamed of going to space since he was 5 years old.

Ric Geiger, 31, an account manager for an automotive supplies wholesaler in Michigan, tells CNBC Make It he started the petition “as a joke” with an initial goal of reaching 150,000 signatures. Geiger says he launched the petition after he saw a similar joke “on a meme page on Facebook” that he thought was “hysterical,” but when he looked online to see if there was an existing petition, he couldn’t find one.

“For me, it started as a joke, because obviously there is no way we can keep Jeff Bezos from re-entering Earth,” Geiger wrote in an email. (Indeed, the petition offers no proposals for how anyone could, realistically, prevent the Amazon billionaire from returning from his spaceflight, which is set to launch on July 20.)

However, Geiger also felt the initial humor of the petition and its title would ultimately allow him to “reach a broader platform” to spread a more serious message about the issue of wealth inequality.

Geiger sums up the message behind the joke petition in one of the comments he posted to the petition’s landing page on Change.org. There, he writes: “Billionaires should not exist…on earth, or in space, but should they decide [to go to] the latter, they should stay there.”

Bezos is the world’s wealthiest person, with an estimated net worth of roughly $199 billion, according to Bloomberg. His wealth even grew by more than $70 billion in 2020 despite the effects of the Covid-19 pandemic on the economy.

The founder of Amazon and private space company Blue Origin has faced quite a bit of criticism over the fact that he’s accumulated a massive amount of wealth while reportedly paying little or no taxes at times. Bezos has also been criticized in the past for donating a relatively small amount of his large fortune to charity, though he has more recently pledged to give more than $12 billion to philanthropic efforts, including climate issues.

Geiger felt his petition would likely strike a nerve, and a funny bone, among those who, like him, are critical of Bezos’ massive accumulation of wealth. While he didn’t expect so many people to add their names to the petition, he hopes the unexpected visibility will draw attention to what he says are the more serious aspects of his critiques of billionaires like Bezos and the broader issue of wealth inequality.

Citing a 2020 survey showing that 63% of Americans were living paycheck to paycheck in the midst of the pandemic, and many average working class Americans facing “crippling student loan or medical debt,” Geiger claims “it’s a slap in the face to watch billionaires like Bezos, [SpaceX’s Elon] Musk, and [Virgin Galactic’s Richard] Branson play space race games with their hoards of wealth.”

In Bezos’ case, the billionaire has invested heavily in his private space company, Blue Origin, at one point selling roughly $1 billion worth of Amazon stock each year to fund the venture.

“So, yeah, I get upset when I see people spending frivolously. I’m talking building a rocket ship and flying to space level frivolity, I’m talking a yacht built custom for traveling outside your main yacht level frivolity, not avocado toast level here,” Geiger wrote in his email, referring to Bezos’ Blue Origin funding and the billionaire’s reported plans to build a $500 million yacht, as well as the oft-repeated, and over-inflated, criticism of millennials spending too much money on avocado toast.

In the past, Bezos has defended his spending on Blue Origin as more than simply a vanity project. In 2019, he told CBS that developing space technologies is “important for this planet [and] important for the dynamism of future generations.” (The billionaire has even envisioned a future where humans leave Earth to live in colonies of space pods.)

“We humans have to go to space if we are going to continue to have a thriving civilization,” Bezos said at the time. “We have become big as a population, as a species, and this planet is relatively small. We see it in things like climate change and pollution and heavy industry. We are in the process of destroying this planet. And we have sent robotic probes to every planet in the solar system — this is the good one. So, we have to preserve this planet.”

Meanwhile, Branson has also said he believes that space exploration is ultimately meant to benefit life back on Earth, while Musk believes that building human colonies on other planets, like Mars, is key to prolonging human civilization.

Geiger’s petition isn’t the only one out there taking aim at Bezos, as another recent Change.org petition made headlines after more than 14,000 people signed on to try to get the billionaire to buy Leonardo da Vinci’s “Mona Lisa”…and eat it.

Regardless, Geiger never actually believed his joking attempt at a petition would eventually approach its goal of 150,000 signatures.

“I didn’t expect that it would get this big. My genuine intention was to use humor to commiserate and help mitigate some of the existential dread among my peers,” he said, adding: “Even as a full-time salaried employee, with nothing [saved for] retirement, the future I see for myself and most of my generation is bleak.”

When asked if he thinks Bezos himself will get word of his petition, and the fact that more than 120,000 people would like him to remain only the wealthiest person in space for the foreseeable future, Geiger says that idea is also worthy of a laugh.

“Honestly, I just think it’s really funny to think that I might in some way show up as a blip on the radar of the richest man in the world simply because of this stunt,” he said.

Jeff Bezos: I spend my billions on space because we’re destroying Earth