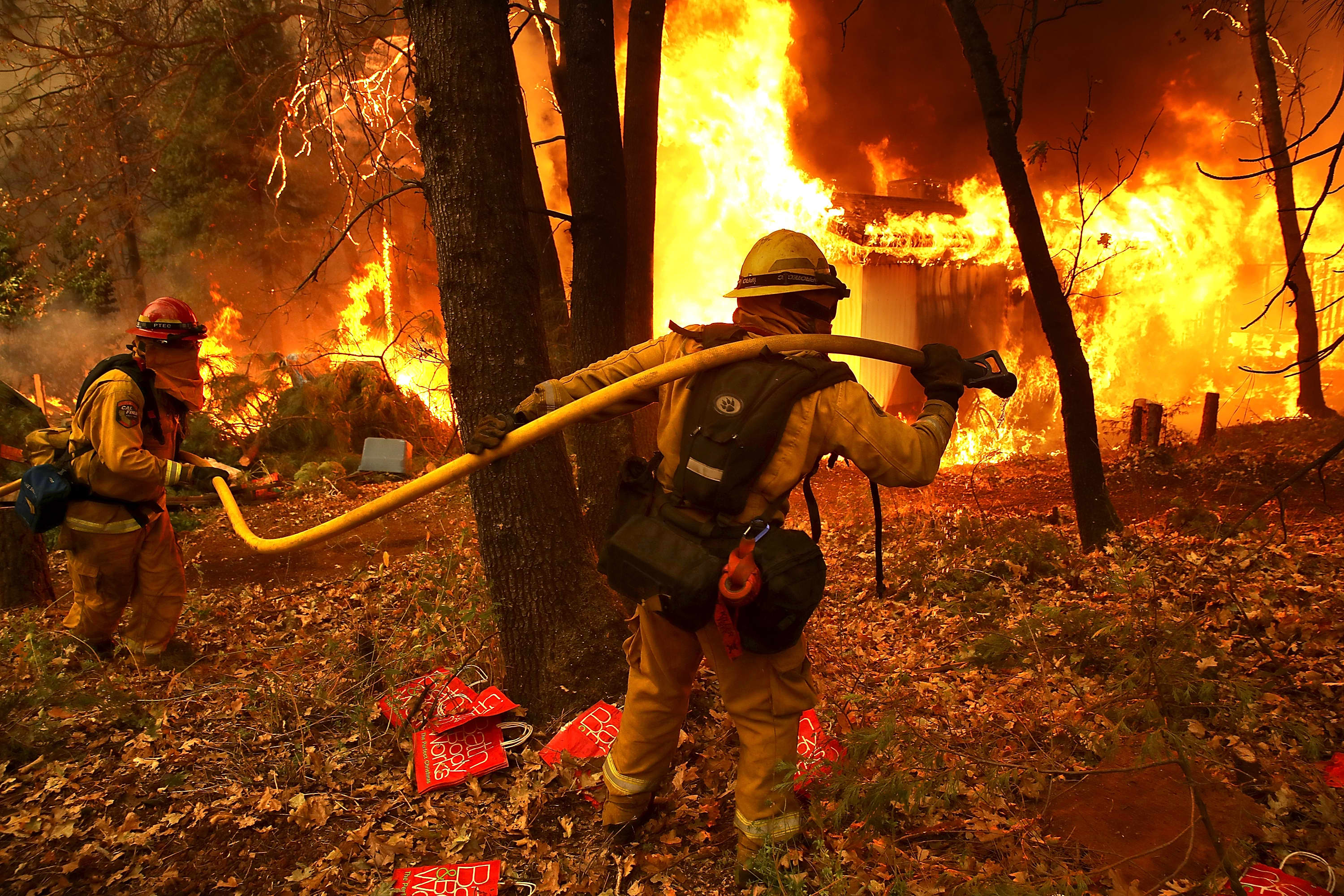 Thousands of victims of California wildfires dating back to 2015, who are entitled to payments under a $13.5 billion settlement with the state’s largest utility, are learning that the amount that they ultimately receive is subject to the whims of Wall Street.

That is according to the retired California appellate judge overseeing the trust fund set up as part of the bankruptcy reorganization of PG&E last year, as well as court filings and other documents reviewed by CNBC’s “American Greed.”

“We don’t know how much money we have because a substantial portion of the assets that are going to be used to pay you are in the form of common stock of Pacific Gas and Electric,” said court appointed trustee John K. Trotter of the Fire Victim Trust, in a video message posted last month to the more than 70,000 fire victims who have submitted claims.

The fund is meant to compensate victims of 24 wildfires, including the devastating Camp Fire, which killed at least 84 people and destroyed much of the town of Paradise in 2018. The largest and most destructive fire in California history, an investigation found that the fire was caused by the failure of a piece of equipment known as a C-hook on a century-old PG&E transmission tower.

“This is the smoking gun. This is the weapon that took out the lives, hopes, dreams and souls of some 84 of our Butte County citizens,” said Butte County District Attorney Mike Ramsey.

Those who survived are still struggling to rebuild. The fire destroyed nearly 19,000 structures.

PG&E’s bankruptcy filing on Jan. 29, 2019, effectively barred victims from suing the company, since a bankruptcy automatically puts all other legal actions on hold. Instead, the reorganization plan approved by the court created the fund, with Trotter, who is also a veteran arbitrator, in charge.

Alameda County Sheriff Coroner officers search for human remains after the Camp fire tore through the region in Paradise, California on November 12, 2018.

Funding a portion of the trust with stock is unusual, experts have said. The trust received 478 million shares of the reorganized company’s stock, making it the utility’s largest shareholder.

Complicating matters, Trotter said, is the potential tax implication of cashing in the stock to pay the victims. When the trust was established, Trotter said, the stock was valued at around $9 per share. Anything above that, he said, could be subject to hefty capital gains taxes. Recently, the stock has been trading at around $10, a potential taxable gain, on paper, of around $478 million.

“Forty-five percent of that would go to the government,” Trotter said.

He said the trust recently received a ruling from the Internal Revenue Service that should allow it to escape the tax bite. But waiting for that ruling, as well as the complicated process to monetize the stock without the tax consequences, has delayed payments to the victims.

Also a concern: while the stock has increased in value since PG&E emerged from bankruptcy last year, it has not gone up as much as some architects of the settlement may have anticipated.

“The stock is down 17% this year, and that’s in in the face of a very buoyant stock market. So, it hasn’t been doing well,” Trotter said. He noted that at current prices, the stock would be worth about $4.8 billion.

“Your settlement called for you to have $6.75 billion worth of stock,” he said. “That has not happened.”

When a court approved the fund last June as part of PG&E’s plan to emerge from Chapter 11 bankruptcy, the company hailed the establishment of the fund as a “critical milestone” in turning the company around and compensating the victims.

“While nothing will repair the wounds caused by the Camp Fire, we hope the actions we are taking to reduce wildfire risk, harden our system and get victims compensated will begin to help restore the trust of our communities and their confidence that we are working to keep them safe,” said PG&E President and CEO Bill Johnson in a statement.

A Cal Fire firefighter monitors a burning home as the Camp Fire moves through the area on November 9, 2018 in Magalia, California.

The statement, dated June 20, 2020, noted that the valuation of the stock at $6.75 billion was “based on an agreed-upon formula,” and that “the ultimate value of the stock could be higher or lower.”

More troubling for victims has been the pace of payments under the settlement. The trust’s claims administrator, Cathy Yanni, has said it will likely take at least two years to pay all the claims.

The process got off to a slow start.

According to the trust’s first annual report filed by Trotter with the bankruptcy court in April — covering the period from the trust’s inception on July 1, 2020 through the end of the year — the fund had paid only about $7.2 million in claims to 499 victims, while racking up $38.7 million in operating expenses. An investigation by KQED in San Francisco found that the trust spent an additional $12.7 million provided by PG&E to set up the claims process, for a total of $51.4 million — more than 7 times what the trust had paid out.

The payments to victims have dramatically increased this year. This week, the trust reported that it had paid more than $436 million to more than 13,000 claimants through June 30. More than half the money was paid out under a special procedure that allows victims to apply for preliminary payments of up to $25,000 with limited documentation in order to get through the initial hardship.

In addition, the trust is suing multiple third parties, including former PG&E officers and directors as well as outside contractors, potentially increasing the pool of money available for victims.

The trust has not provided updated figures on its operating expenses.

In an earlier video message for the victims posted May 17, Trotter defended the large amount of money spent upfront, which he said was necessary because of the complicated task of processing all of the claims — in most cases, multiple claims per victim — not to mention setting up the entire claims system from scratch.

“We have over 250,000 separate claims,” Trotter said. “So the enormity of this case, is what also makes it different.”

“We’re building the process by which you’re going to get paid,” he said. “I would think you’d be concerned if we weren’t spending money. If we weren’t hiring 300 people to help resolve your claims, then that’s when you should worry.”

Trotter said he hoped to ultimately keep expenses to 1% of the payout. He said a more typical expense ratio in cases like this is around 4%.

Complicating matters, however, is the price of the stock. Trotter said victims should root for the reorganized company’s success.

An aerial view of Paradise, California off of Clark Road on Nov. 15, 2018. The Camp Fire has burned more than 7,000 structures in Paradise.

“You are 25, or 24½ percent, owners of PG&E, and so it’s important for you to want PG&E to do well,” he said. “The old PG&E, I don’t have to tell you, was certainly less than a model corporate citizen. The new PG&E, which now appears regularly in front of the California Utilities Commission, is trying much harder and doing a much better job.”

After filing for Chapter 11 bankruptcy protection in 2019, the “old” PG&E pleaded guilty to 84 counts of involuntary manslaughter in connection with the Camp Fire. A judge ordered the company to pay a $3.5 million fine.

In a statement to “American Greed,” the company denied putting profits over safety.

“While we cannot change the past, we can learn from it,” the company said. “We can never let up in our pursuit of safety and doing what is right.”

But thousands of fire victims, still waiting to be made whole, remain stuck in a nightmare.

See how PG&E went from a model utility to a convicted killer. Watch an ALL NEW episode of “American Greed,” Monday, July 5 at 10 p.m. ET/PT only on CNBC.