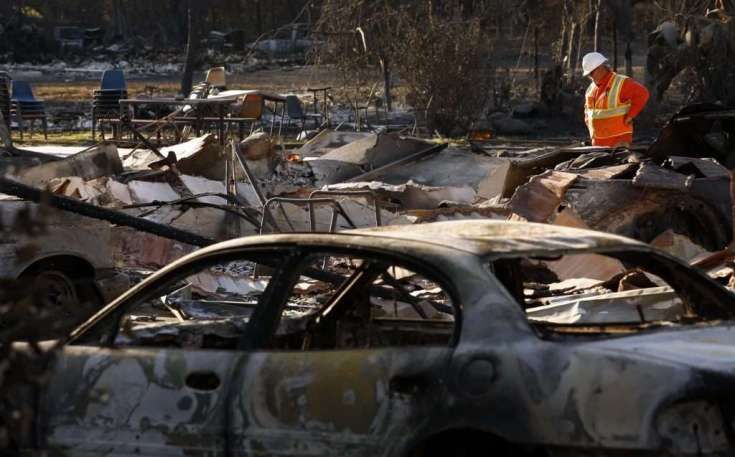 California’s largest utility company, Pacific Gas & Electric, has a massive wildfire problem. Five of the ten most destructive fires in California since 2015 have been linked to PG&E equipment, including the 2018 Camp Fire that took out the town of Paradise and killed 85 people.

Since then, PG&E has been reducing the risk of equipment sparks by shutting off the power in high fire-risk areas during dry, windy weather. It calls these Public Safety Power Shut-Offs, or PSPS events, and in 2019 they left almost a million customers in the dark for seven days.

“We essentially lost that full week of service. We lost all of our food supply, we were not able to operate,” said Brennen Jensen, who owns the 100-year-old Hotel Charlotte in Groveland, California.

Keeping the power on for 16 million Californians is a big job, as is maintaining the integrity of more than 100,000 miles of power lines while keeping it clear of vegetation that could turn a spark into a deadly wildfire. All this while answering to California regulators and, as an investor-owned utility, shareholders.

“The management of the company mostly tried in the years leading up to Napa, Sonoma, and Paradise to please shareholders by controlling costs,” said Michael Wara, director of the Stanford University Climate and Energy Policy Program.

Now, PG&E has partnered with Grass Valley-based startup BoxPower to try out a new solution for keeping the power on safely in remote areas. It’s a solar-powered microgrid, housed in a shipping container, that serves as the fulltime power source for five customers in the mountains of Briceburg, California. Until the remote grid turned on in April, they had been living solely off generator power since a 5,000-acre fire destroyed their high voltage line in 2019.

PG&E partnered with BoxPower to build its first remote microgrid, which started providing 70-90% renewable power to five customers in Briceburg, California, in April, 2021.

“These customers are not paying for this directly. This is PG&E using its budget for distribution costs. We were going to have to rebuild this wire one way or another; we’re choosing to rebuild it with this system,” said Bennett Chabot, remote grid program manager for PG&E.

“PG&E is trying everything you can think of because it knows that it needs to repair its relationship with the state of California,” Wara said.

PG&E is also building bigger generator powered back-up microgrids to kick on during PSPS outages. Groveland, where Jensen runs her hotel, was supposed to get one in October 2020. PG&E says it’s now delayed until the end of 2021.

“It’s going to require a lot of nimble, quick responses and significant investment. And I hope that PG&Eis up to the challenge,” Jensen said.

Watch the video to hear from more community members and to see the five-customer microgrid and other fire mitigation efforts PG&E says are proof it’s committed to doing better at keeping their power on and keeping them safe.