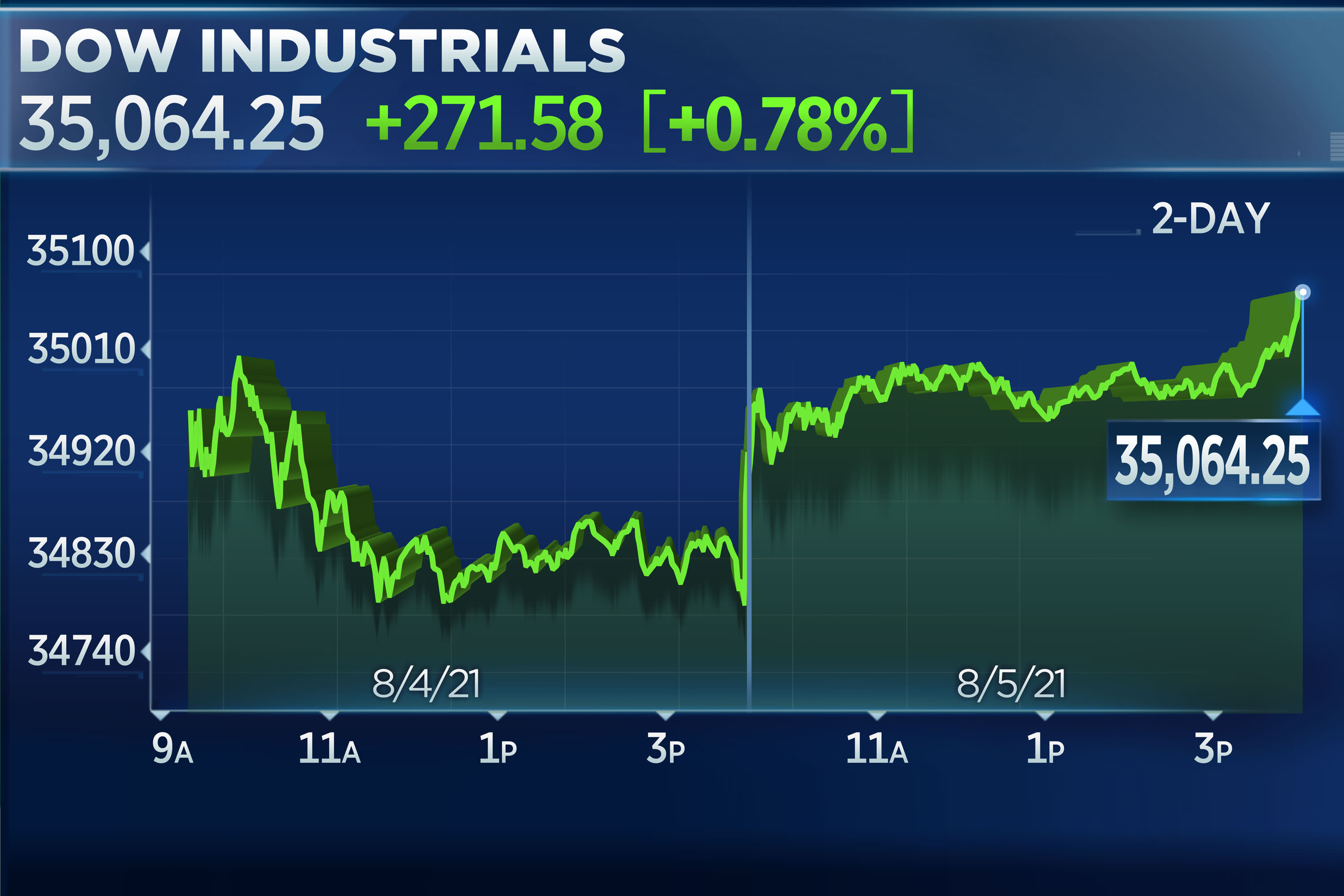 The major U.S. equity indexes rose Thursday and the S&P 500 set a new record closing high as energy and travel stocks bounced back ahead of a key labor market report.

Weekly initial jobless claims came in at 385,000 on Thursday, in-line with expectations. The claims data was the last reading before the key July jobs report, which will be released on Friday morning. There is a wide range of estimates from economists about what the report will show, and some metrics for employment gains have disappointed despite a high level of reported job openings.

The jobs report is expected to be a key data point for the Federal Reserve as it considers when to tighten monetary policy.

“That’s going to be the big event for the week as it has a lot of direct implications for what the Fed will do. Tomorrow’s reading and the September one are critical for policymakers to decide on tapering and the timing of that and the pace of that,” said Angelo Kourkafas, an investment strategist at Edward Jones.

The results of an ADP private payroll survey released Wednesday showed a gain of 330,000 jobs for July, well short of the consensus estimate of 653,000. Kourkafas said that the ADP miss showed that there was downside risk to Friday’s report. Economists expect the reading will show the U.S. added 845,000 in non-farm payrolls in July, about even with the previous month, according to Dow Jones estimates.

Travel stocks, including airlines, bounced on Thursday after struggling over the past week amid the spread of the delta variant of Covid 19. American Airlines rose 7.5%, while casino stock Caesars Entertainment jumped 6.4%.

“It’s nice to have a day where we’re seeing a rebound in reopen and travel. They’ve just gotten nailed every which way from Sunday,” said Stephanie Link, chief investment strategist and portfolio manager at Hightower Advisors.

The 10-year Treasury yield topped 1.2% on Thursday, continuing a volatile stretch of trading for the benchmark measure. The yield briefly dipped below 1.13% on Wednesday before bouncing back in late morning trading.

Shares of Roku dropped roughly 4% after the company issued quarterly results on Wednesday and reported a slowdown in streaming TV viewing. Etsy fell 9.7% after the company gave guidance for the current quarter that indicated the pandemic-fueled commerce boom may be coming to an end.

However, earnings season has been strong overall. Goldman Sachs raised its year-end target for the S&P 500 to 4,700, representing 7% upside, in part due to an improving earnings outlook.

During regular trading Wednesday, shares of Robinhood surged 50%, continuing a volatile jump after last week’s soft initial public offering. However, the stock reversed course on Thursday and fell more than 27% following the announcement that some stockholders will sell more than 97 million shares.