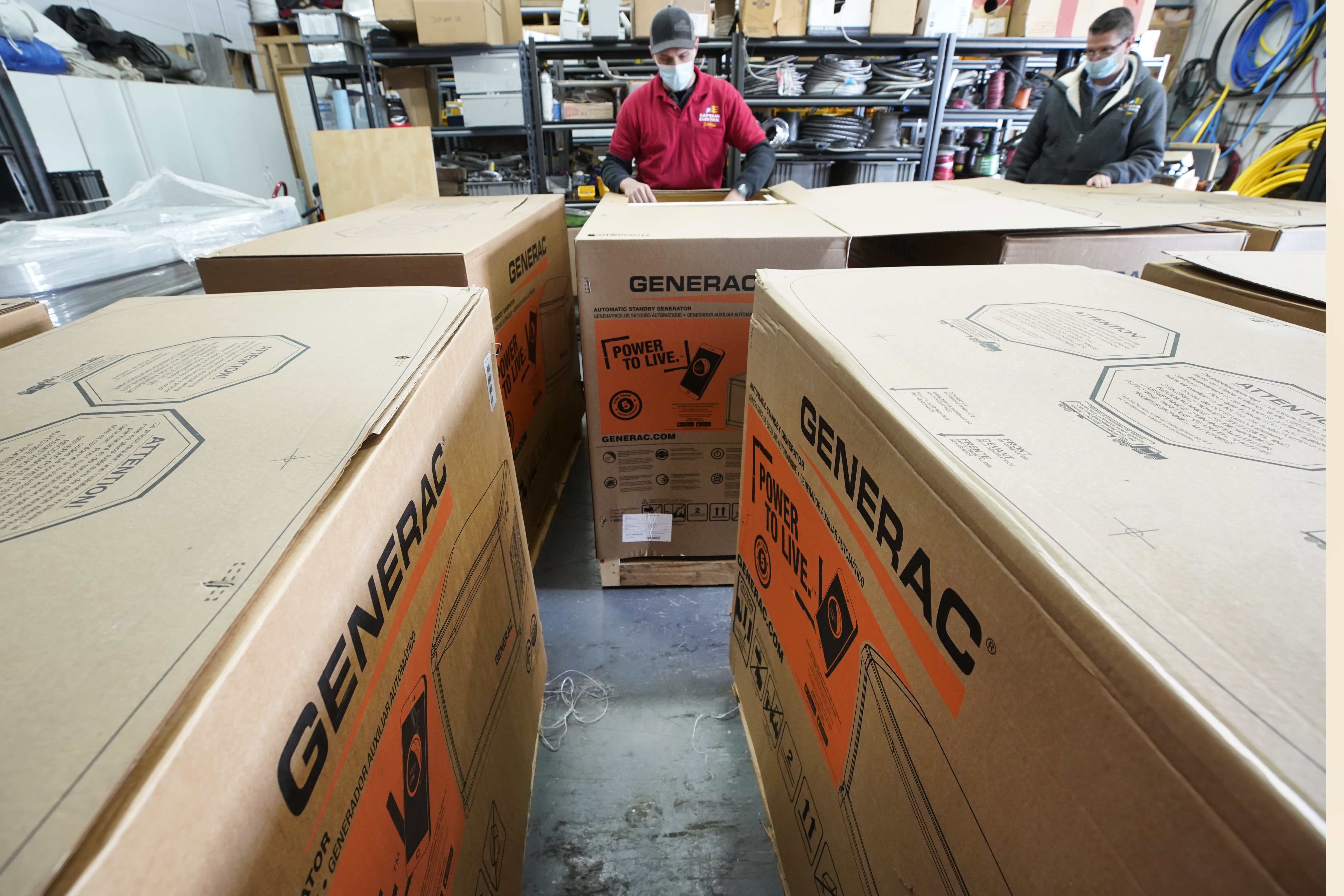 A worker inspects a 24-kilowatt Generac home generator at Captain Electric on February 18, 2021 in Orem, Utah.

Affirm, Amazon — Shares of Affirm soared more than 46% after the buy-now, pay-later company announced a partnership with Amazon. The e-commerce giant is teaming up with Affirm for its first partnership with an installment payment player on the Amazon site. Shares of Amazon rose more than 2%.

Globalstar, Apple — The satellite services company saw shares surge about 64% on a report that Apple’s iPhone, scheduled to launch in the fall, will support satellite communications, allowing customers to call and send messages via satellite. Apple has an existing satellite phone network of 24 satellites in low Earth orbit. Securities analyst Ming-Chi Kuo said Globalstar is most likely to partner with Apple. Apple shares rose 3%.

Baxter International, Hill-Rom — Baxter International, the healthcare products maker, saw its shares rise 2.7% after the Wall Street Journal reported it’s in advanced talks to acquire the medical technology provider Hill-Rom in a $10 billion potential deal that’s about $150 per share. Hill-Rom shares were $132.90 at the market close on Friday. They rallied nearly 10% Monday.

Generac — The battery backup company’s shares rose 1.2% after Bank of America reiterated the stock as a buy. Hurricane Ida, which has become the fifth-largest hurricane to hit the U.S. mainland, could “serve as a positive catalyst” for the company over the next 30 days, the analyst said. Generac stock has climbed for the past eight sessions, benefiting from demand increases related to the weather disruptions.

NetEase — Chinese gaming giant NetEase’s stock fell as much as almost 5% midday after China’s National Press and Publication Administration published a new rule for kids and teens under 18 years old in China, limiting their online video game time to just three hours per week. The agency billed the rules as a way to safeguard children’s physical and mental health.

PayPal — PayPal shares jumped more than 3.5%% on a CNBC report that it’s exploring a stock-trading platform for its U.S. customers as it faces increasing competition from Square, Robinhood and other brokerages and financial superapps.

Robinhood — Robinhood fell about 3% following the PayPal report and later dropped as low as 8% on news that Gary Gensler, chairman of the U.S. Securities and Exchange Commission, said a full ban of payment for order flow is “on the table,” according to a Barron’s report. The controversial practice, in which brokerage firms receive rebates on trades routed through their clearing firm, is used by many no-fee brokers.

Capital One — Shares of Capital One fell more than 6% after Baird downgraded the stock to an underperform rating from neutral. Good news is already priced into the stock after a massive rally this year, according to Baird. “After being vocal bulls on COF for all of 2020 and most of this year, we now feel that the risk/reward trade-off for the stock is skewed to the downside, and we recommend taking profits here,” the firm said in a note.

Dave & Buster’s — Shares of Dave & Buster’s fell more than 4% after Stifel downgraded the stock to a hold rating from a buy. Casual dining visitation trends have slowed amid high Covid cases, according to Stifel’s analysis of mobile location data.

Zoom Video — Shares of the video conferencing company rose nearly 2% Monday ahead of Zoom’s second-quarter earnings report. The company will release its latest results after the bell.