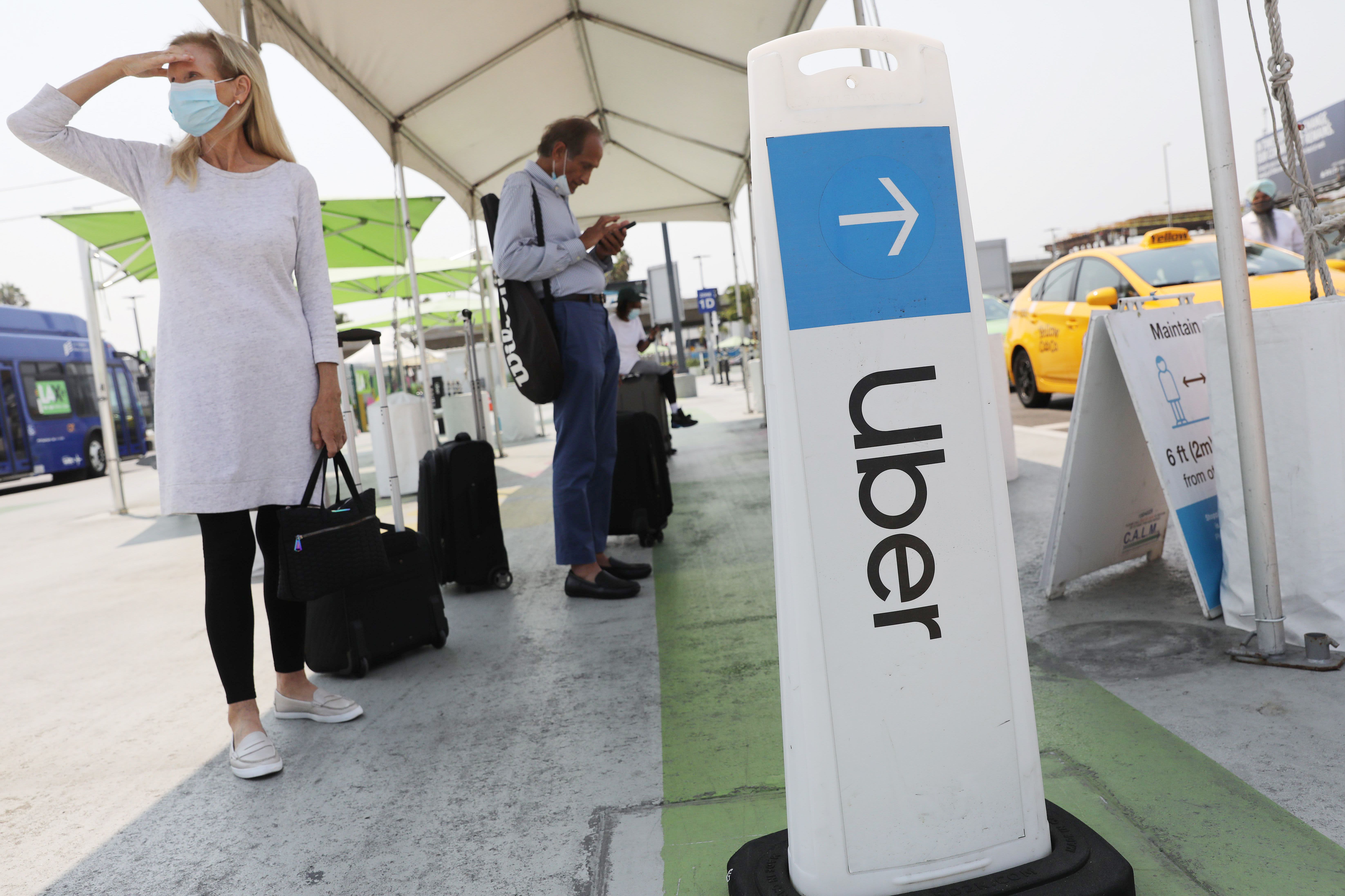 Air travelers wait in the ride share lot near a sign for Uber at Los Angeles International Airport (LAX) on August 20, 2020 in Los Angeles, California.

Ambarella — Shares of the semiconductor company surged 27% after Ambarella beat expectations on the top and bottom lines for its second quarter. The company reported 35 cents in adjusted earnings per share on $79.3 million in revenue. Analysts surveyed by Refinitiv were expecting $75.7 million. Ambarella’s third-quarter revenue guidance also topped expectations, and the company said it expects a second-half recovery after the Texas freeze earlier this year hit its supply chain.

PVH Corp — The clothing company’s stock soared more than 15% on stellar earnings. The Calvin Klein owner reported earnings of $2.72 per share, well above the $1.20 per share expected by Wall Street, according to Refinitiv. PVH made $2.31 billion in revenue, topping expectations of $2.14 billion. Digital revenues for the company rose 35% year-over-year.

Sunrun — Shares of the solar company jumped more than 6% after JPMorgan reiterated its overweight rating and added the stock to its analyst focus list. The firm cited Sunrun’s strong inventory position, which should allow it to navigate any shortages that may hit the industry. JPMorgan’s $86 12-month price target on Sunrun indicates a rally of over 90%.

Kansas City Southern — The freight rail holding company climbed 3.8% higher after Citi upgraded the stock to buy from neutral. The company has been in the middle of a bidding war between Canadian National Railway and Canadian Pacific Railway. This week, a U.S. regulator rejected a proposed voting trust for the deal. An activist investor in Kansas City Southern has also been moving to stop the deal. Shares of Canadian National Railway gained 3.7% and Canadian Pacific Railway added nearly 5%.

Wells Fargo — Shares fell more than 4.9% as its phony accounts scandal from five years ago continues to plague the company. Shares extended their losses from Tuesday, when banking regulators warned about the possibility of imposing new sanctions on the bank. The Office of the Comptroller of the Currency and the Consumer Financial Protection Bureau said they were unsatisfied with the pace of the bank’s efforts to compensate the victims of the scandal. Examiners at the OCC are among those expected to testify against former Wells executives later this month.

Uber — The ridesharing company saw its stock jump 3.7% after KeyBanc reiterated it as overweight, saying the company has a big opportunity to gain market share in the grocery delivery space. Uber also said Tuesday that it’s selling stakes in several Russian businesses for $1 billion.

Apple — Shares of Apple jumped before pulling back to less than 1% after the company announced the rollout of a feature that will allow users to add driver’s licenses and state IDs to their Apple Wallet. Arizona and Georgia will be the first states to adopt the feature. Connecticut, Iowa, Kentucky, Maryland, Oklahoma and Utah will follow. Apple didn’t specify a timeline.

Campbell Soup — Shares of the food producer rose more than 2% after it beat top- and bottom-line estimates for the second quarter. It also issued a fiscal 2022 adjusted earnings outlook of $2.75-$2.85 per share, compared to a consensus estimate of $2.87, citing higher input costs and a constrained labor market.