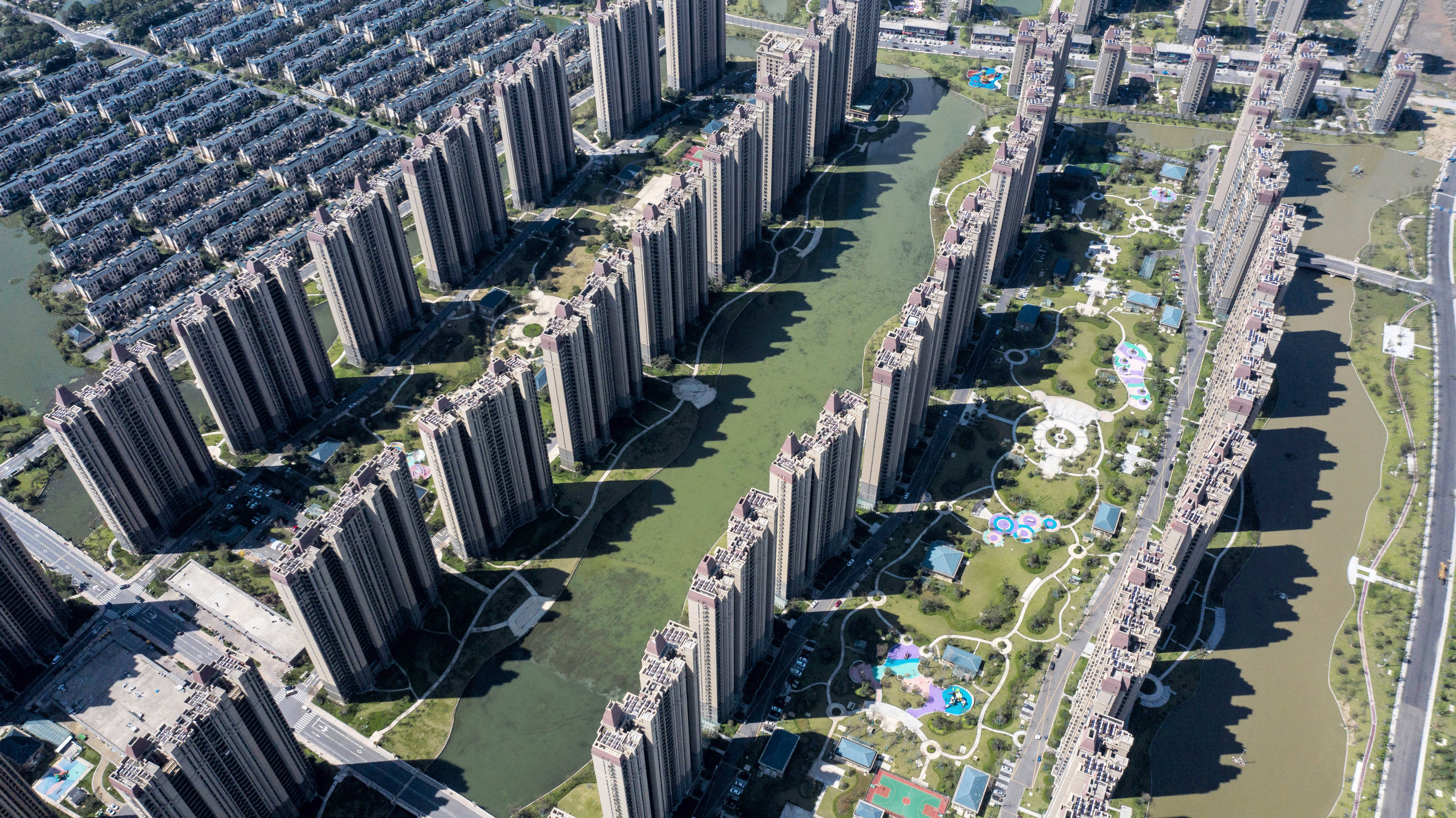 The Evergrande headquarters is seen in Shenzhen, southeastern China on September 14, 2021, as the Chinese property giant said it is facing “unprecedented difficulties” but denied rumours that it is about to go under.

However, when it comes to the scale of potential impact on international financial markets, analysts point to a major difference between the Evergrande crisis and the Lehman collapse: Evergrande holds land, while Lehman held financial assets.

“Let’s face it, this is not Lehman’s, this is not LTCM,” Carnell said, referring to American hedge fund Long-Term Capital Management, which failed in the 1990s. and spurred a panic. “It’s not a hedge fund with massive leveraged positions or a bank whose financial asset prices are hurtling towards zero. It’s a property development firm with quite a lot of debt, you know, 300 billion plus thereabouts in dollar terms.”

He expects that if Evergrande can get some cash flow into its physical assets, the company can finish its development projects, sell them and start paying down debt.

On Wednesday, the company’s real estate group announced it would pay the interest on time on a mainland-traded bond denominated in yuan.

“Evergrande is facing a liquidity crunch although it owns a large land bank,” Larry Hu, chief China economist at Macquarie, said in a report Tuesday. He noted that the developer’s assets consist primarily of land and housing projects that are worth just over 1.4 trillion yuan ($220 billion).

No Lehman-style contagion story makes sense here and therefore no Lehman Moment will there be.

The collapse of Lehman Brothers led to a crash in financial derivatives — credit-default swaps and collateralized-debt obligations — “causing the market to doubt the health of other banks,” Hu said.

“But it’s quite unlikely that the Evergrande saga would cause the land price to crash,” he said. “After all, the value of land is simply more transparent and stable than financial instruments. It’s especially so in China, where local government monopolizes the land supply.”

“As the result, [the] local government has a strong incentive to stabilize land price. In the worst-case scenario, local government could even buy back land, as they did in 2014-15,” he added.

Another critical difference in Evergrande’s case is the greater level of government control and involvement in China’s real estate industry.

“Chinese banks and many other entities are government arms first, intermediators a distant second,” analysts at research firm China Beige Book said in a report Monday. “Even non-state financials can be controlled to an extent rarely seen outside China. Commercial bankruptcy is a state choice.”

“Beijing says lend, so you lend; when or even whether you get your money back is secondary,” the report said. “No Lehman-style contagion story makes sense here and therefore no Lehman Moment will there be.”

The legendary U.S. investment bank collapsed 13 years ago this month in an iconic moment of the global financial crisis. The bank underwrote tens of billions of dollars’ worth of securities backed by risky mortgages during a U.S. housing bubble. The U.S. government ultimately allowed Lehman to fail, while bailing out other financial institutions.

In China’s case, Beijing has tried to allow the market to play a greater role in the economy by letting more state-owned enterprises’s loans default.

Authorities will be patient in Evergrande’s case as they have two goals of preventing excessive risk-taking and maintaining stability in the property market, said Macquarie’s Hu.

“Policymakers would choose to wait first, then step in later to ensure an orderly debt restructuring,” he said. “A wholesale bailout is not very likely and shareholders/lenders might take a big loss. But the government would make sure that the pre-sold apartments get done and delivered to homebuyers.”

Hu also pointed to the Chinese government’s recent track record in restructuring giants such as Anbang Insurance, Baoshang Bank, HNA Group and China Huarong Asset Management. “China’s banking system has an annual profit of 1.9 [trillion yuan] and a provision of 5.4 [trillion yuan], which could easily absorb the loss from Evergrande,” he said.

‘China has the tools,’ IMF says

In Evergrande’s case, the property developer has more direct ties to foreign investors than the bulk of China’s economy.

The company has about $19 billion in total offshore bonds outstanding, equivalent to about 9% of U.S. dollar-denominated Chinese bonds, according to investment bank UBS. Evergrande’s total liabilities of about $313 billion is about 6.5% of the total liability of China’s property sector, the report said.

The UBS analysts expect Evergrande to restructure its debt, and predict that bond prices will recover from their lows and limit contagion.

The analysts also laid out a range of possible spillover effects if Evergrande were to enter the less likely scenario of full liquidation, such as the failure of exposed banks and selling across emerging market credit.

International Monetary Fund Chief Economist Gita Gopinath told Reuters this week the organization believes “China has the tools and the policy space to prevent this turning into a systemic crisis.”

The IMF can organize bailouts for countries or regions in financial stress.

Even though public government statements in recent months have called for preventing major financial risks, Chinese authorities’ intervention is not a given.

Chinese officials have so far made few major public statements about Evergrande.

At a press conference last week, a National Bureau of Statistics spokesman said the department is monitoring the difficulties of some large real estate companies and the potential impact on the economy.

China’s real estate market and related industries such as construction account for more than a quarter of national GDP, according to Moody’s estimates.

Bets that property prices would only rise ultimately forced many Chinese households to take out mortgages to afford homes. In the last few years, the government has tried to cool the market with measures such as restrictions on the level of debt developers can take on.

— CNBC’s Eustance Huang and Weizhen Tan contributed to this report.