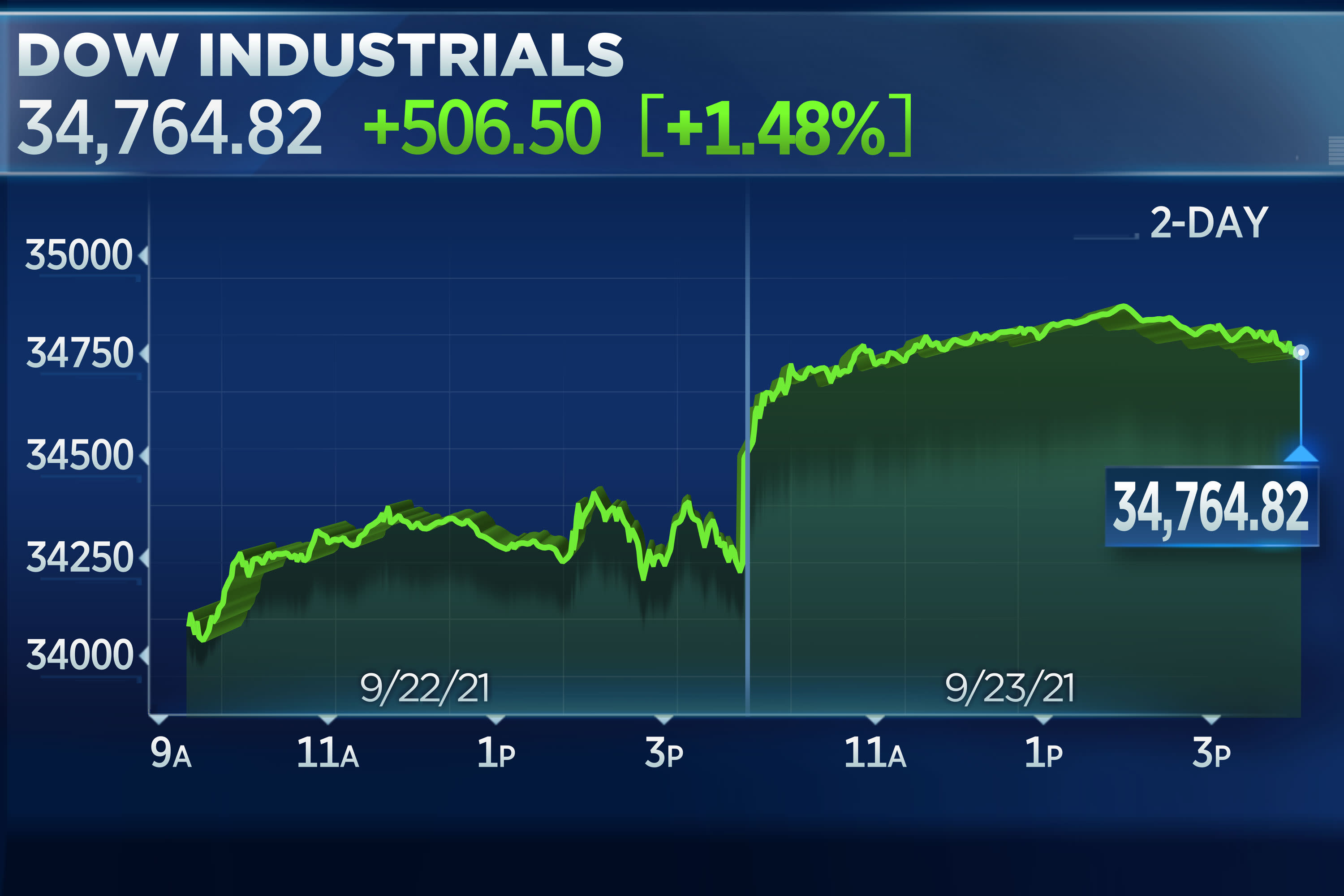 U.S. stocks jumped for a second day as fears around a crisis in China’s property market eased somewhat and as the Federal Reserve kept current monetary stimulus in place for just a little bit longer.

Thursday gains pushed the major averages back into the green for the week. The Dow and S&P are up now up 0.5% and 0.3%, respectively, while the Nasdaq has inched 0.06% higher for the week.

The Dow dropped more than 600 points on Monday and fell again on Tuesday on concerns about the potential collapse of Chinese developer Evergrande Group rippling through the global economy. But Hong Kong’s Hang Seng index rebounded more than 1% overnight with Evergrande rallying more than 17% as investors seemed to bet China wouldn’t allow a full failure of the key company and would provide more liquidity for the market.

And the U.S. market got an additional boost from the Fed on Wednesday afternoon with the central bank indicating no immediate removal of stimulus policies. The central bank issued a statement following the meeting that said if progress continues “as expected,” then a “moderation in the pace of asset purchases may soon be warranted.”

“Uncertainty had been building around the path of the economy and the Fed instilled some confidence into markets yesterday,” said Charlie Ripley, senior investment strategist for Allianz Investment Management. “In addition, other risks that have been weighing on investor sentiment like the debt ceiling and risks associated to China’s real estate market appear to be fading, which have dialed up investors’ appetite for risk.”

Salesforce led the Dow higher with a 7.2% gain after the cloud company raised its full-year 2022 revenue guidance. Darden Restaurants was among the big S&P movers, jumping 6.1% after reporting strong quarterly earnings.

Energy stocks led the S&P, with APA Corp and Devon Energy up over 7% each as U.S. West Texas Intermediate (WTI) crude futures rose to a high of $73.50 per barrel, its highest level since Aug. 2. Oil settled at $73.30.

Bank stocks got a boost as the 10-year Treasury yield bounced, providing a possible boost to their bottom lines. JPMorgan, Bank of America and Citibank each added over 3%. Regional banks like Regions and Fifth Third, which tend to trade closely along with rates because of their reliance on lending, each closed more than 4% higher.

On Wednesday, Evergrande eased fears a bit by resolving payment on a local bond. But global investors are still waiting on whether the company will pay $83 million in interest on a U.S. dollar-denominated bond due Thursday. Government regulators instructed Evergrande to avoid a near-term dollar bond default, Bloomberg News reported, citing a person familiar. Yet some of Evergrande’s bondholders did not expect payment Thursday and had not heard from the company, Reuters reported.

Investors largely looked past the Evergrande crisis as the trading day continued. And they kept buying even after weekly jobless claims rose more than expected last week, showing the strength of the U.S. recovery is still in question.

“Although there may be some additional turbulence this fall, we are constructive on the U.S. economy in general and believe that any dips would be worth buying as the fundamentals are still sound and recession appears to be more than a year away at this point,” said Chris Zaccarelli, chief investment officer for Independent Advisor Alliance.