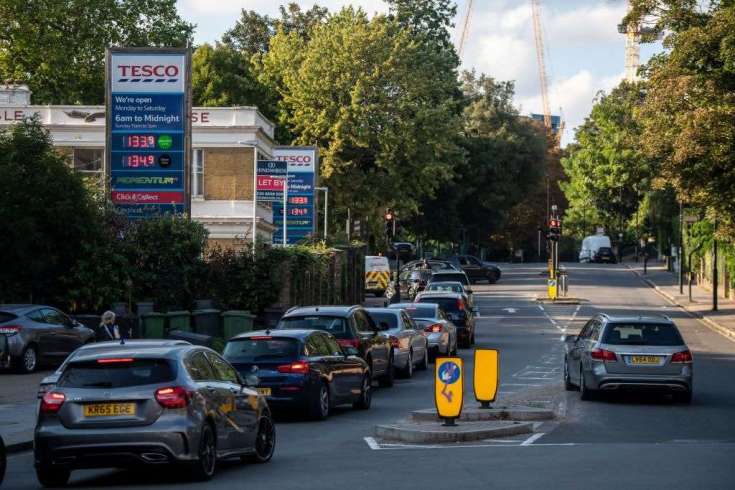 A sign reading “No Fuel Sorry” displayed at an Asda petrol station on September 26, 2021 in Cardiff, United Kingdom.

Britain’s government is implementing emergency measures in an effort to keep gasoline flowing, after a weekend of panic buying left gas stations around the country without fuel.

Long queues of cars were seen outside U.K. gas stations in recent days, as drivers attempted to fill their vehicles following media reports of an impending shortage, prompting ministers to urge the public to buy fuel as normal.

A major lack of truck drivers has meant deliveries of fuel and goods have recently fallen short in Britain.

U.K. Business Minister Kwasi Kwarteng said on Sunday that he had exempted the fuel industry from U.K. competition laws, which he said would allow companies to “share information and prioritize the delivery of fuel to areas most in need.”

Meanwhile, thousands of truck drivers are set to be granted temporary U.K. visas in the run-up to Christmas, in an attempt to limit supply disruption ahead of the festive period.

Hundreds of gas stations around the U.K. have also imposed a £30 limit per customer on gasoline purchases, Sky News has reported.

Prime Minister Boris Johnson was widely reported to be considering using military personnel to deliver fuel to gas stations. But speaking to Sky News on Monday, Environment Secretary George Eustice said the government had “no plans at the moment to bring in the army to actually do driving.”

“We always have a Civil Contingencies section within the Army on standby – but we’re not jumping to that necessarily at the moment,” he added.

Gasoline pumps out of use as drivers panic buy fuel at a BP gas station in southeast London, U.K., on 26 September 2021.

A spokesperson for the U.K. government was not immediately available to comment on the situation when contacted by CNBC.

Gordon Balmer, executive director of the U.K.’s Petrol Retailers Association, told LBC News on Monday that temporary visas would ease supply constraints to an extent, but added that it was not enough. He said he hoped the government was indeed considering measures like drafting in the army.

“A lot of people have filled up over the weekend, many people only fill up once a month,” he said. “That might give us some respite to start to replenish stocks over the next few days.”

Balmer added that in a PRA poll of members, some gas station operators had reported that 90% of their sites were dry.

Oil giant BP said in a statement on Friday that it had temporarily closed some of its gas stations due to shortages of unleaded and diesel petrol.

“These have been caused by some delays in the supply chain which has been impacted by the industry-wide driver shortages across the U.K. and there are many actions being taken to address the issue,” a spokesperson said.

“We continue to work with our haulier supplier to minimize any future disruption and to ensure efficient and effective deliveries to serve our customers. We are prioritizing deliveries to sites with largest demand and seeking to minimize the duration of stock outs.”

A spokesperson for Exxon Mobil‘s Esso told CNBC on Monday that a number of its 200 forecourts had been impacted “in some way.”

“We are working closely with all parties in our distribution network to optimize supplies and minimize any inconvenience to customers,” they said in an email.

The spokesperson added that ExxonMobil operates the U.K.’s largest refinery and an extensive underground pipeline network that supplies its fuel distribution terminals, all of which was running as normal.

Motorists queue for fuel at a Tesco garage in Lewisham on September 26, 2021 in London, England.

“We have good availability of fuel, and we’re working really hard to ensure regular deliveries to our petrol filling stations across the UK every day,” a spokesperson for supermarket and gas station operator Tesco said via email on Monday.

Competitor Sainsbury’s told CNBC in an emailed statement: “We’re experiencing high demand for fuel. We’re working closely with our supplier to maintain supply and all our sites continue to receive fuel.”

Speaking to Sky News on Sunday, Transport Minister Grant Shapps claimed there was “plenty of fuel” and urged the public to be “sensible” when buying gasoline. It comes after he told the BBC on Friday that the army would be brought in to drive trucks if it would help the situation.

How bad is the U.K.’s truck driver shortage?

Before the pandemic, the U.K.’s Road Haulage Association estimated that the U.K. had a shortage of more than 60,000 heavy goods vehicle drivers. At that time, around 600,000 HGV drivers were employed in the country, according to the RHA, 60,000 of whom were from EU member states. Since the pandemic, the RHA estimates that the shortage has widened to 100,000 drivers.

In an RHA survey conducted in June, Brexit was named the biggest cause of the driver shortage by more than 600 participants, with 58% of respondents citing Britain’s departure from the EU as a reason for the depleted numbers.

“The uncertainty of Brexit … forced many drivers to [return to their country of origin],” the RHA said in its July report. “The vast majority have not returned, nor are they expected to.”

The exodus was exacerbated by Covid-19, according to the RHA, with many more drivers leaving the U.K. throughout the pandemic and not returning.

Meanwhile, the shutdown of vocational driving tests during lockdowns prevented people from qualifying to become HGV drivers. According to the RHA, only 15,000 people were able to successfully complete training in 2020 — that’s 25,000 fewer than the previous year.

In May, a report from thinktank Driver Require said the sector “had relied heavily on EU HGV drivers to avoid a supply crisis in the event of a rapid increase in demand.”

“The pandemic has motivated EU HGV drivers to return to their home countries, and older British drivers to shield or take early retirement,” the Driver Require report said. “Brexit has compounded these trends by further alienating EU workers, while the impact of the IR35 [employment regulation] reforms on net pay may be the final straw, causing more EU drivers to seek work in mainland Europe and British drivers to seek other careers.”

Environment Minister Eustice told the BBC on Monday that the driver shortage was “not a huge problem,” adding that the only reason gasoline was running out was because people were “buying petrol when they don’t need it.”