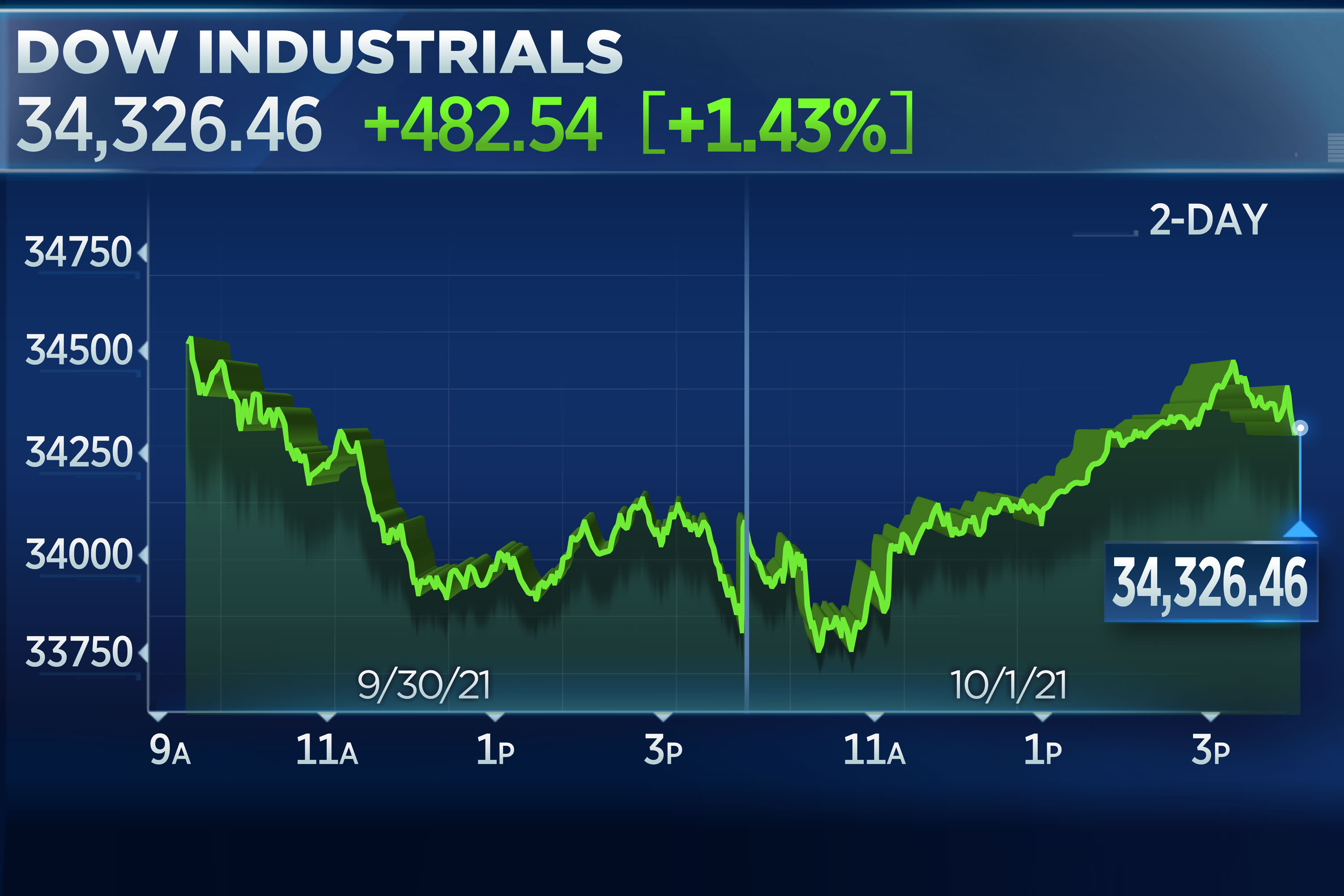 U.S. stocks pushed higher on Friday as investors shook off a rough September and news of a new oral treatment for Covid-19 boosted shares of companies tied to the economic recovery.

Shares of Dow member Merck jumped close to 8.4% after the drug maker and Ridgeback Biotherapeutics said their oral antiviral treatment for Covid-19 reduced the risk of hospitalization or death by 50% for patients with mild or moderate cases. The companies plan to seek emergency authorization for the treatment.

The new drug from Merck appeared to boost travel stocks. Shares of Royal Caribbean and Las Vegas Sands added 3.8% and 4.3%, respectively. Southwest Airlines rose 5.6% after JPMorgan upgraded the stock and said most of the group was worth buying for a trade. Bank stocks rose as well, helping the Dow outperform.

“We have seen this rotation back to the so-called reopening plays and the more cyclical areas, which I think makes a lot of sense over the next couple of weeks as we think about the Covid trends improving, with the cases falling from last month’s peak, and the news about the Merck pill appears promising,” said Angelo Kourkafas, an investment strategist at Edward Jones.

Vaccine stocks, including Moderna, pulled back following the Merck news.

Friday’s market rebound came after Wall Street capped a tumultuous September as inflation fears, slowing growth and rising rates kept investors on edge. The S&P 500 finished the month down 4.8%, breaking a seven-month winning streak. The Dow and the Nasdaq Composite fell 4.3% and 5.3%, respectively, suffering their worst months of the year.

“A combination of slowing growth, less accommodative monetary policy, China headwinds, fading fiscal stimulus, and nagging supply chain bottlenecks all conspired to weigh on investor sentiment as we head into fall and 4Q21,” Chris Hussey, a managing director at Goldman Sachs, said in a note.

Ten of the 11 S&P 500 sectors suffered losses in September, led to the downside by a 7.4% monthly drop in materials stocks. Energy is the best performer of the month, gaining more than 9%.

The 10-year Treasury yield fell back below 1.50% on Friday. A jump in rates to end September knocked tech stocks.

“That’s just a squiggle. As we zoom out, it’s going to look like nothing in 12 months. I know investors are nervous, and there’s a lot of headwinds here, but as you know, when the wall of worry is big, that’s often a good opportunity for investors,” Fundstrat’s Tom Lee said on CNBC’s “Halftime Report.”

While October is known for notable market crashes, it typically is the start of a better seasonal period for stocks. The S&P 500 averages a 0.8% gain in October, according to the Stock Trader’s Almanac. Stocks average a 1.6% increase and 1.5% rise in November and December, respectively, according to the almanac.

On the data front, personal income rose 0.2% in August, in line with expectations. The price index for core personal consumption expenditures was up 3.6% year over year, the biggest jump in more than 30 years slightly ahead of the estimate of 3.5% from economists surveyed by Dow Jones.

In Washington, President Joe Biden went to Capitol Hill on Friday to try to help in negotiations over a major infrastructure bill. Congress reached a short-term deal to fund the government on Thursday but is still working on legislation on infrastructure and the debt ceiling.