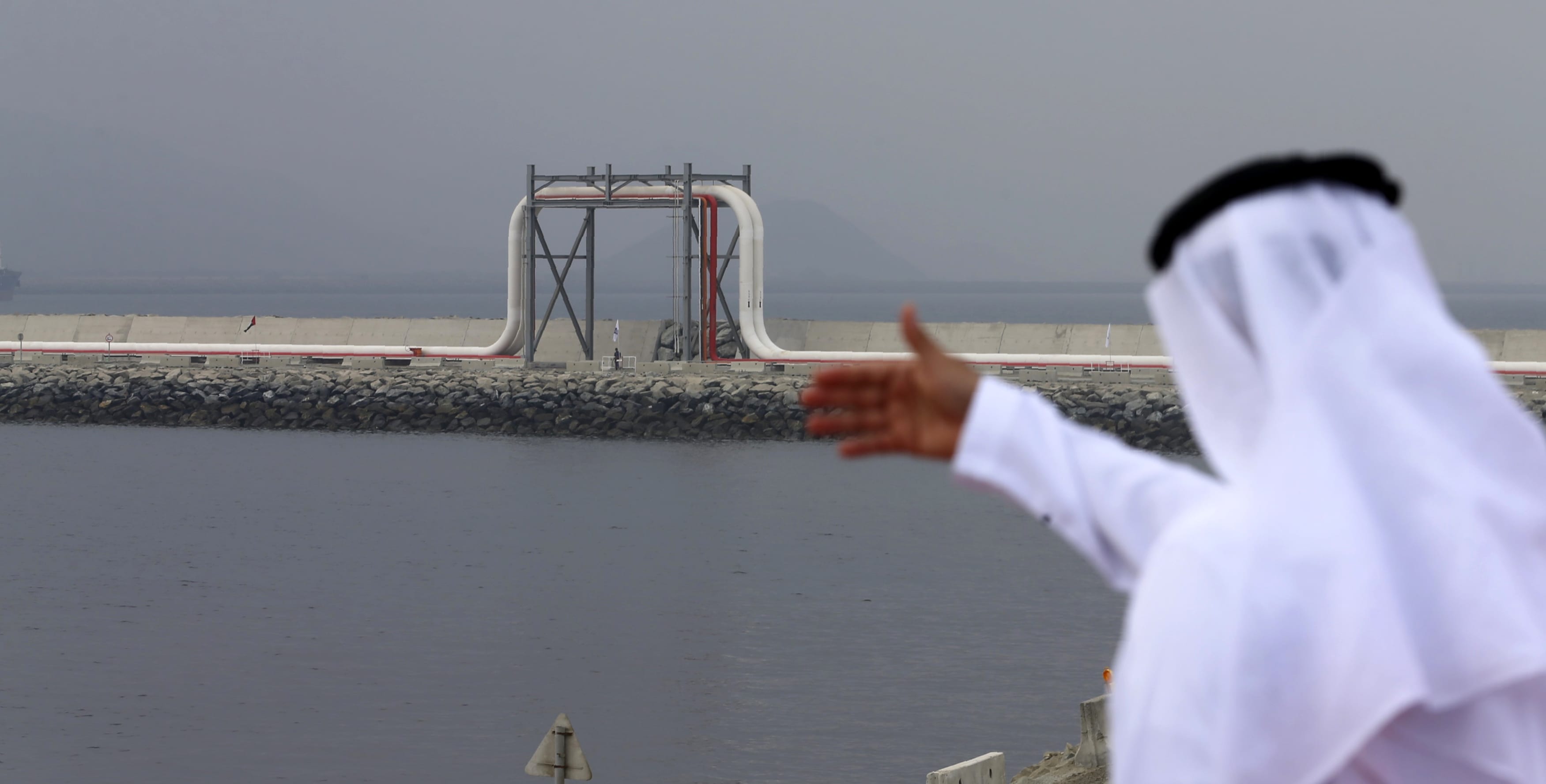 An Emirati man stands in front of a pipeline at the oil terminal of Fujairah during the inauguration ceremony of a dock for supertankers on September 21, 2016.

OPEC and its oil-producing allies have agreed to continue with their current output plan, deciding against loosening the taps in the face of multiyear highs in crude prices and U.S. pressure to help cool the market.

The group, known as OPEC+, will rollover its August program to gradually increase oil production by 400,000 barrels per day each month.

Russian Energy Minister Alexander Novak told a news conference Thursday: “The decision was made previously to increase production by 400,000 (barrels per day) every month, and I underscore every month, until the end of 2022. Today the decision was reiterated to maintain current parameters which were decided on earlier.”

International oil benchmark Brent crude was trading at $81.68 per barrel at 1:20 p.m. ET on Thursday, down 34 cents from the previous day.

Asked why the group was not boosting its production levels despite complaints and requests from oil consumers like the U.S., India and Japan, Novak replied that OPEC and its allies were maintaining market balance and remaining wary of potential changes in demand.

“From August until now, we have added 2 million barrels of additional production to the market,” Novak said. “So as planned, we are giving the market more and more volume, as it is recovering, at the same time we also see there is a seasonal drop in demand in the fourth and first quarters of the year, and also there are some signs such as a decrease in oil product demand in the EU in October, which we have observed.”

The minister continued that this “basically underscores the fact that global oil demand is still under pressure from the delta Covid variant, and due to the preservation of various limitations and Covid measures in some countries.”

Oil prices have recently hit their highest levels since 2014, and crude-importing countries are feeling the pain.

President Joe Biden squarely blamed the reluctance of OPEC+ to pump more oil for the sharp rise in energy prices in the U.S. and around the world.

“The idea that Russia and Saudi Arabia and other major producers are not going to pump more oil so people can have gasoline to get to and from work, for example, is not right,” Biden said Sunday at the G-20 meeting in Rome.

“I would like to reiterate the importance of the consuming nations to us as producers. They are our partners, we work with them to move to a smooth recovery after the pandemic,” Al Mazrouei said.

“So it is really crucial for us a group of producers to do the right measures, addressing the concerns that we have received from many of the countries,” he said, adding that he expects a surplus in supply by the first quarter of next year.

The UAE minister said that the 400,000 barrel per day resolution will “take us smoothly through to that position, and we are expecting that the … rebalancing will be happening in the first and second quarter.”

Several of the OPEC ministers at the press conference pointed to the skyrocketing prices of other commodities such as gas and coal to argue that oil markets are lucky to have OPEC+ regulating supply.

“You look at the gas market, you look at the coal, the lack of having a governor of the market makes it so difficult for the consuming nations when it comes to a huge increase in the commodity prices,” Al Mazrouei said. “We haven’t seen that happening to oil in the same magnitude because of this group.”

“Oil is not the problem,” Saudi Energy Minister Abdulaziz bin Salman told reporters. “What is the problem is the energy complex is going through havoc and hell.”

“This industry has been battered. People need signals, market signals, for them to invest. For them to have the assurance, to trust that these investments, if they happen, will be rewarding for the shareholders. Clarity has been lost.”

Caution is key for OPEC+

Indeed, caution appears to be the priority for oil-producing countries.

“OPEC has made it clear that we are not looking at prices, we are looking at supply and demand,” Nigerian Minister of State for Petroleum Timipre Sylva said. “And the supply … it is not enough to react to what is happening in the market. Especially when you compare it to what is happening in the gas market. As a responsible organization, it is time to just watch the market.”

It’s also worth noting that several OPEC+ member states, in particular Nigeria and Angola, already struggle to meet their production quotas, meaning that higher OPEC production and consequently lower oil prices would result in lower revenue for those countries.

“Prices of over $80 per barrel are, of course, another reason why OPEC+ will not be in any hurry to add supply to the market, particularly given that U.S. producers have shown little inclination to raise output,” Caroline Bain, chief commodities economist at Capital Economics, said in a note Thursday.

“That said, we think that the gradual increase in OPEC+ output over the course of next year, along with growth in non-OPEC oil output, will flip the oil market into a surplus. As a result, we forecast that the price of Brent will fall to around $60 per barrel at end-2022.”