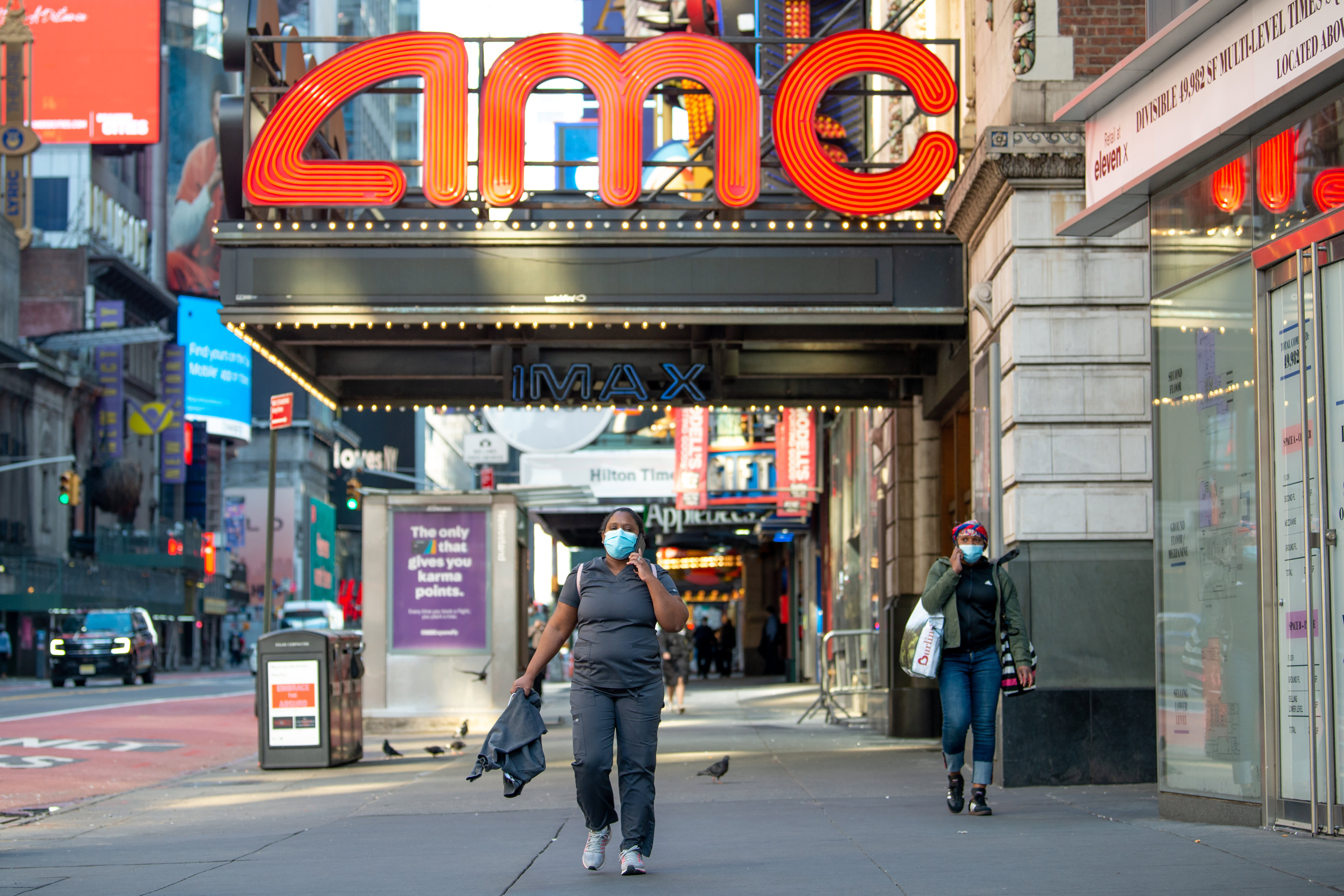 A medical worker wearing a mask walks near the AMC movie theater in Times Square amid the coronavirus pandemic on May 7, 2020 in New York City.

Exxon Mobil – Exxon shares advanced 6.5% after the company’s fourth-quarter profit topped analysts’ estimates. The oil giant earned $2.05 per share on an adjusted basis, which was ahead of the $1.93 analysts surveyed by Refinitiv were expecting. Revenue came in at $84.97 billion, which was below the expected $91.85 billion. The company said it paid down $9 billion in debt during the period, bringing its debt level to prepandemic levels.

UPS – Shares of the delivery company surged 14% following the company’s fourth-quarter results and upbeat guidance. The company earned an adjusted $3.59 per share, while analysts surveyed by Refinitiv were expecting $3.10. Revenue also topped expectations, and UPS announced a 49% dividend increase.

AMC Entertainment – Shares of the movie theater chain rose 5% after the company announced fourth-quarter preliminary results that topped expectations. AMC said it was able to cap off 2021 with “the strongest quarter in two years,” which was led by movies like “Spider-Man: No Way Home.”

Sirius XM – Shares of the satellite radio and streaming audio service company jumped 6.3% after a better-than-expected earnings report. Sirius beat estimates by a penny with quarterly earnings of 8 cents per share, according to Refinitiv. Its revenue also surpassed expectations. Sirius also announced a special dividend of 25 cents per share.

Pitney Bowes — Shares of the mailing company cratered 15.4% in midday trading after missing Wall Street’s estimates for its quarterly earnings. Pitney Bowes reported EPS of 6 cents per share, below the 11 cents per share forecasted by analysts, according to Refinitiv.

AT&T — Shares of AT&T fell 4.3% after the telecom company announced it will spin off WarnerMedia in a $43 billion merger with Discovery. AT&T also said it will cut its dividend by nearly half. Meanwhile, Discovery shares rose 1.7%.

UBS Group — Shares of UBS Group rallied 9.3% in midday trading after the Zurich-based bank announced plans to increase its dividend as well its boost its share buyback program. UBS also posted net profit attributable to shareholders of $1.35 billion for the fourth quarter, down from $1.64 billion a year prior.

Cirrus Logic — Shares of the semiconductor company fell 7.3% despite beating on the top and bottom lines of its quarterly results. The company also gave strong fiscal fourth-quarter revenue guidance.