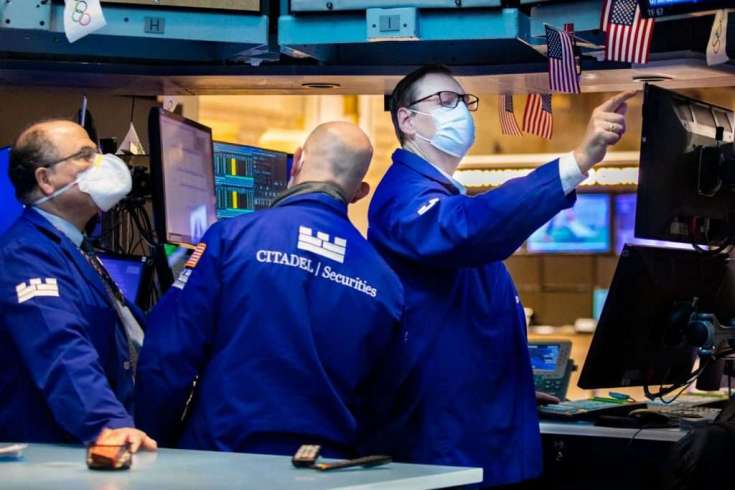 U.S. stocks churned lower on Thursday after a key inflation report showed a faster-than-expected rise in prices and boosted the benchmark 10-year Treasury yield above a key level.

The tech-heavy Nasdaq Composite was down 1.2%, while the S&P 500 shed 1.2% and the Dow Jones Industrial Average lost 350 points, or nearly 1%. All three major averages fell sharply at the market open before briefly rallying into positive territory.

Thursday’s consumer price index report showed a year-over-year rise of 7.5%, hotter than expected and the largest gain since 1982.

Investors were focused on the report as a clue to how aggressive the Federal Reserve will be to curb inflation. The 10-year Treasury yield jumped above 2%, with shorter-term yields also moving sharply higher. The benchmark 10-year yield was at 1.51% at the end of December.

“With another surprise jump in inflation in January, markets continue to be concerned about an aggressive Fed. While things may start getting better from here, market anxiety about potential Fed overtightening won’t go away until there are clear signs inflation is coming under control,” said Barry Gilbert, asset allocation strategist for LPL Financial.

Stocks took another leg lower in early afternoon trading after St. Louis Fed President James Bullard told Bloomberg News that he was open to a 50-basis point hike in March and wanted to see a full percentage point of hikes by July.

The rise in interest rates appeared to boost bank stocks, with JPMorgan and Wells Fargo gaining more than 1%. Higher interest rates can make it easier for banks to earn profits in some parts of their business.

Rapidly rising inflation has pushed traders to price in a faster pace of Fed interest rate hikes. Chances for a 50 basis point increase in March rose to 48% Thursday morning, according to CME data. The market also was pricing in a 77% probability of six rate hikes in 2022

“A 2% rate for the 10-year Treasury note yield, coupled importantly with higher than forecast inflation and consequently more aggressive Fed tightening cycle, is negative for equity prices overall and especially debt-dependent companies like technology,” said Kathy Bostjancic, chief U.S. financial market economist at Oxford Economics. “The key offset would be that economic growth and earnings for now are healthy. However, a more aggressive Fed could slow growth more than desired.”

Shares of homebuilders and utilities, which can also be sensitive to rising rates, underperformed on Thursday.

A solid batch of earnings reports helped to limit the losses for the market on Thursday.

Shares of Dow 30 component Disney jumped 4% after the company reported a quarterly earnings beat and a doubling of revenue from its parks, experiences and consumer products division.

Coca-Cola shares were up 1.8% after the soft drink giant reported earnings and revenue that beat Wall Street estimates.

Expedia, Affirm and Zillow will report earnings after the closing bell.

In other economic news, weekly jobless claims came in at 223,000, slightly below expectations.