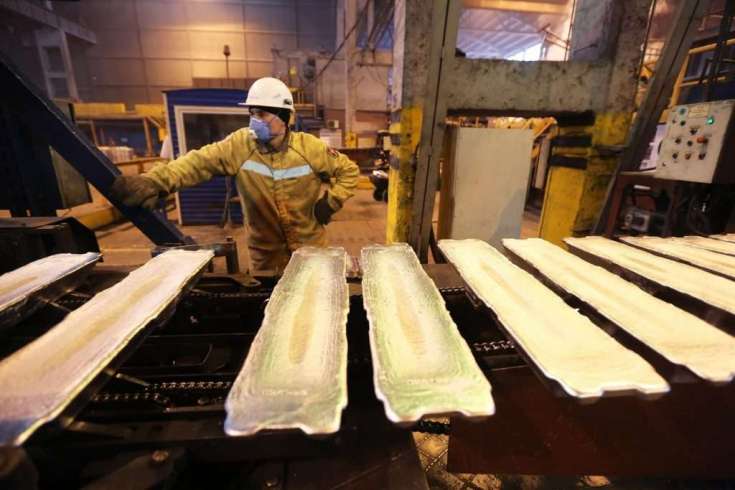 A worker watches as aluminum ingots pass along a conveyor belt after cooling in the foundry at the Krasnoyarsk aluminum smelter, operated by United Co. Rusal, in Krasnoyarsk, Russia.

Commodities prices surged across the board Thursday amid fears of a supply disruption after Russia invaded Ukraine.

Russia is a key producer and exporter of not just energy, but metals and grains, too. Markets were already tight ahead of the invasion, meaning there’s little ability to absorb any output cuts.

“With base metals inventories already running extremely low, there is very little additional cushion for further supply disruptions — either from Russia directly or via higher-for-longer gas and power prices,” JPMorgan said in a note to clients.

Aluminum prices jumped more than 3% to hit a record high of $3,450 per ton on the London Metal Exchange. Nickel is now trading at the highest level in more than a decade: around $25,000 per ton.

Russia is a key producer of all four metals. The country supplies 35% of the world’s palladium and 10% of world platinum, according to data from Cru. Aluminum, nickel, and crude steel production stands at 6%, 5% and 4%, respectively.

“[A]luminum and nickel are making further gains amid fears that these two base metals could suffer supply outages from Russia as sanctions are imposed and counteraction is taken,” Commerzbank said Thursday in a note to clients.

“Though there have been no physical supply disruptions yet, there are serious concerns that Russia could move to restrict commodity exports in response to US sanctions,” RBC said Thursday.

“With the notable exception of the Nord Stream 2 pipeline project, which has already been halted, the White House has gone to great lengths to convey that it will not target the Russian energy sector and exacerbate an already tight supply situation,” the firm added.

The move in Europe was far more extreme, with prices surging more than 50%. Russia supplies around one third of Europe’s natural gas.