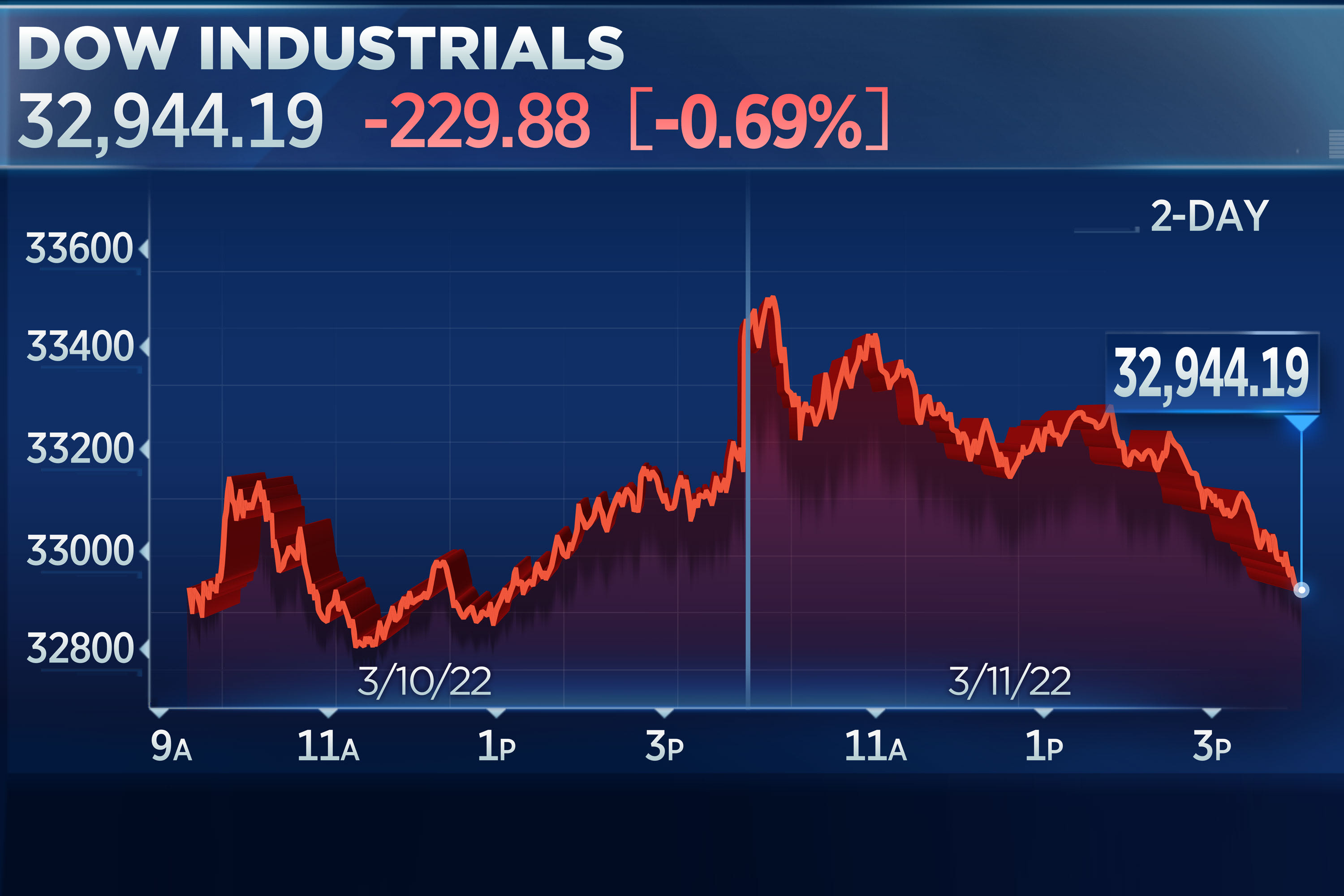 The Dow Jones Industrial Average fell on Friday and notched its fifth straight week of losses as investors remain cautious about the war between Russia and Ukraine.

Russian President Vladimir Putin said Friday that “certain positive shifts” have occurred in the talks between the Kremlin and Ukraine. However, a ceasefire has not been negotiated. Meanwhile, President Volodymyr Zelenskyy reportedly said Ukraine has reached a “strategic turning point” in its war with Russia.

U.S. President Joe Biden also called for an end to Russia’s status as a preferred trade partner, while Congress passed a funding bill that includes $14 billion of Ukraine aid.

“Stocks are looking at another red week, as hope for a ceasefire, only to be disappointed, has added to the uncertainty,” said Ryan Detrick of LPL Financial.

The Dow posted a five-day losing streak, as the Russia-Ukraine war continues to be an overhang on financial markets. The S&P and Nasdaq fell for a second straight week.

“Potentially good news from favorable comments regarding cease fire negotiations from Putin but investors are unsure how much weight to put on this given some of his previous comments which turned out to be hollow,” said Jim Paulsen, chief investment strategist for the Leuthold Group.

However, Bank of America said Friday that stock declines related to the war could have bottomed.

“The S&P 500’s -12% decline from its peak suggests much of the froth has been taken out,” said Savita Subramanian, equity and quant strategist at Bank of America Securities. “Stocks are largely pricing in the geopolitical shock, where the S&P 500 fell 9% from peak-to-trough since Russia-Ukraine headlines in early Feb, similar to a typical 7-8% fall in prior macro/geopolitical events.”

The moves came amid another day of higher energy prices. West Texas Intermediate crude, the U.S. benchmark, rose 2.9% to around $109 per barrel, while international standard Brent crude moved 2.9% higher to around $112. To be sure, crude prices are well off the highs seen earlier in the week.

On the data front, the University of Michigan consumer sentiment index sunk to 59.7 in March, down from 62.8 in February, according to the report released on Friday. This marks the weakest print since September 2011.

“News that consumer confidence sunk even lower this morning as household fears about inflation intensify have ramped up worries about a serious U.S. economic slowdown or perhaps even a recession,” added Paulsen.

Elsewhere, Rivian slipped 7.6% after missing estimates for the fourth quarter on the top and bottom lines, while DocuSign sank 20.1% after issuing weak guidance for the first quarter and fiscal year.

Certain tech names dragged on the Nasdaq on Friday and continued their weakness since Monday. Zoom Video fell 5%, bringing its weekly losses to nearly 10%. Meta Platforms fell 3.9% and lost 6.2% for the week.