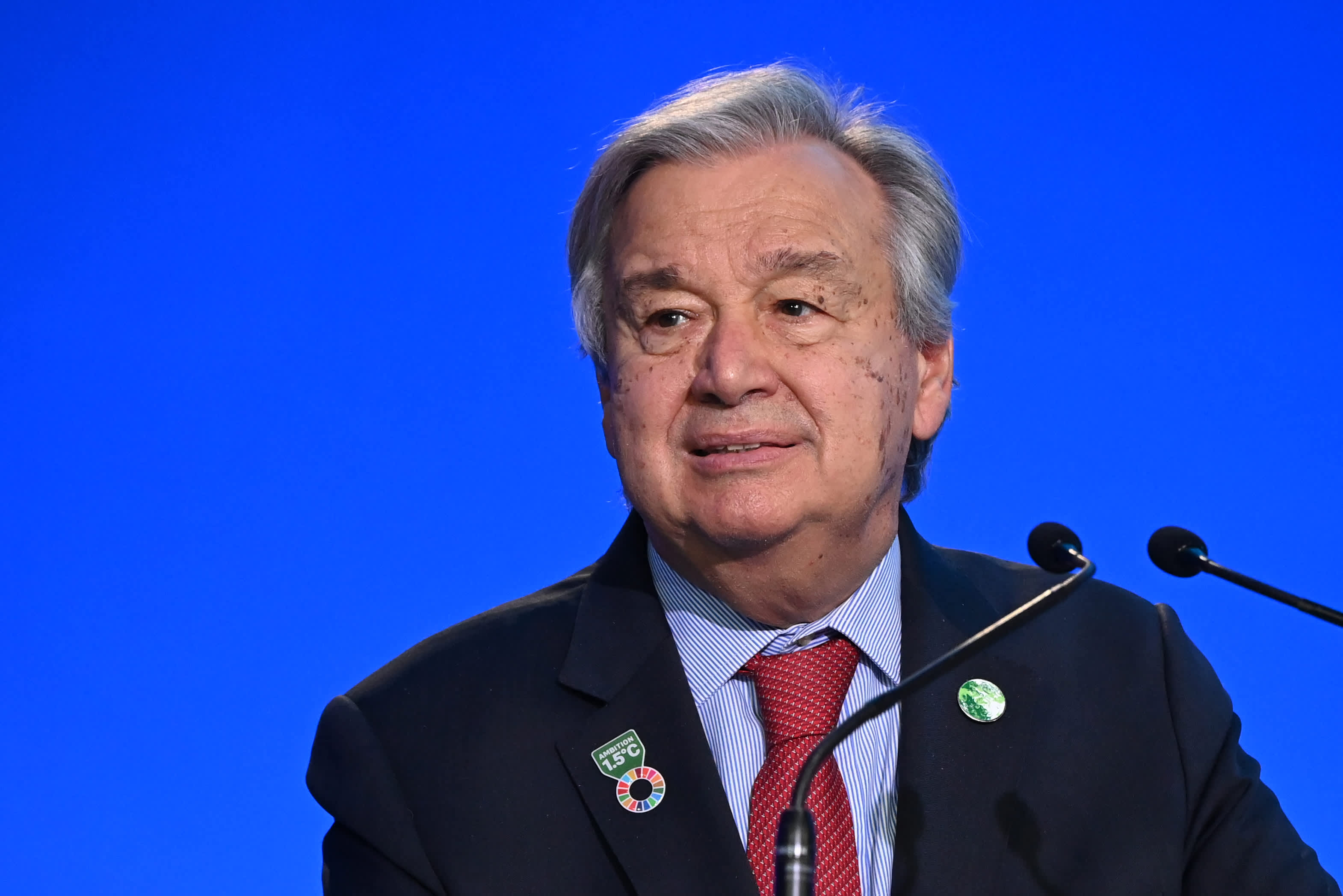 The U.N. Secretary General issued a stark warning Monday, saying the planet had emerged from last year’s COP26 summit in Glasgow with “a certain naïve optimism” and was “sleepwalking to climate catastrophe.”

In remarks delivered to The Economist’s Sustainability Week via video link, Antonio Guterres sketched out a picture of where he felt the world stood when it came to tackling global warming.

He noted that while COP26 had seen positive developments related to issues such as cutting methane emissions, tackling deforestation and mobilizing private finance, significant challenges remained.

“Keeping 1.5 alive requires a 45% reduction in global emissions by 2030 and carbon neutrality by mid-century,” he said. “That problem was not solved in Glasgow. In fact, the problem is getting worse.”

Guterres’ reference to 1.5 relates to the Paris Agreement’s target of limiting global warming “to well below 2, preferably to 1.5 degrees Celsius, compared to pre-industrial levels.”

The Paris Agreement was reached at the COP21 climate change summit in December 2015. More than six years on, it would appear that, for Guterres, a huge amount of work still needs to be done.

“According to present national commitments, global emissions are set to increase by almost 14% in the 2020s,” he said. “Last year alone, global energy-related CO2 emissions grew by 6% to their highest levels in history. Coal emissions have surged to record highs. We are sleepwalking to climate catastrophe.”

On Russia’s invasion of Ukraine and the wide-ranging effects this could have, Guterres offered up an equally stark assessment. He said that “the fallout from Russia’s war in Ukraine risks upending global food and energy markets, with major implications for the global climate agenda.”

“Countries could become so consumed by the immediate fossil fuel supply gap that they neglect or knee-cap policies to cut fossil fuel use. And this is madness: addiction to fossil fuels is mutually assured destruction.”

Guterres’ comments come at a time when several major economies, including the European Union, are trying to find ways to reduce their reliance on Russian hydrocarbons.

Last week, the International Energy Agency said speed limits on highways should be cut by at least 10 kilometers per hour (6.2 mph) to help lower oil demand. The recommendation was part of a wider 10-point plan published by the Paris-based organization.

In his speech Monday, Guterres also said that “those in the private sector still financing coal must … be held to account.”

“Their support for coal not only could cost the world its climate goals,” he said. “It’s a stupid investment — leading to billions in stranded assets.” It was also, he argued, “time to end fossil fuel subsidies and stop the expansion of oil and gas exploration.”

“But even the most ambitious action will not erase the fact that the situation is already bad. In many cases, and many places, it is irreversibly bad.”

Coal has a substantial effect on the environment and the U.S. Energy Information Administration lists a range of emissions from coal combustion. These include carbon dioxide, sulfur dioxide, particulates and nitrogen oxides. Elsewhere, Greenpeace has described coal as “the dirtiest, most polluting way of producing energy.”

Guterres speech points to the huge task facing governments around the world who say they want to reduce their reliance on fossil fuels and prevent the worst effects of climate change.

Despite the existence of such goals, fossil fuels still play a huge role in the world’s energy mix and companies continue to discover and develop new oil and gas fields.

On the aim of keeping 1.5 alive, Guterres laid out a broad vision for how this could be achieved.

Alongside a “rapid, just and sustainable energy transition,” the phase out of coal and all other fossil fuels needed to be sped-up, he said.

Other tools included focusing on adaptation, strengthening national climate plans annually and accelerating the decarbonization of sectors like cement, steel, aviation and shipping.

In addition, the most vulnerable required protection and climate finance needed to be increased. “That’s how we will move the 1.5 degree goal from life support to the recovery room,” Guterres said.