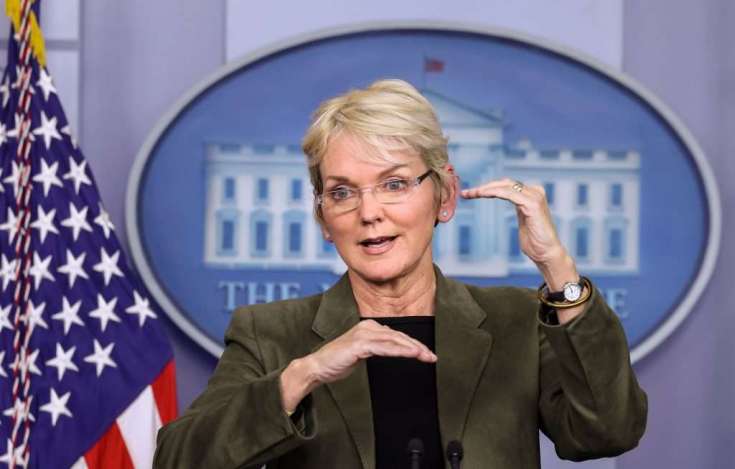 Secretary of Energy Jennifer Granholm takes questions during a media briefing at the White House in Washington, U.S., November 23, 2021.

Carbon dioxide emissions are a result of burning fossil fuels and are a primary cause of anthropogenic climate change, and the amount of carbon dioxide in the atmosphere has been trending steadily higher for the last 60 years.

Carbon capture technology aims to carbon dioxide at the point the emissions are being generated or from the atmosphere more broadly. The industry is still nascent, and critics say the better use of resources is to scale up clean energy infrastructures.

But Energy Secretary Jennifer Granholm thinks there’s room for both.

“Certainly our first preference is to make sure that we are powered by clean, zero carbon emitting energy. And we’re doing all of that. But you can walk and chew gum,” Granholm told CNBC in a video interview on Thursday. (She used the same metaphor at a conference earlier this year to describe the contradiction between pursuing green energy policies while asking oil and gas companies to up their production to counter rising prices at the pump.)

“There’s criticism that something like this — carbon capture and sequestration — merely prolongs assets that the fossil [fuel] industry would be using,” Granholm said. “I will say this: Anything we can do to decarbonize is a good thing.”

In particular, carbon capture technologies will be important to compensate for hard-to-decarbonize sectors of the economy, like heavy industry and the production of steel and cement, she said.

She also said that fossil fuels will be a part of the global energy infrastructure for a while.

“We have a goal of net zero by 2050. And you know, the IPCC has said that fossil fuels are going to be around during this transition,” Granholm said. “So we’ve got to start now in these technologies.”

Carbon capture technology is in its very early stages, and remains quite expensive.

The Department of Energy aims to help bring down the cost of carbon removal technologies as part of its Carbon Negative Shot, or Earthshot. The goal of the Earthshot is to be able to remove gigatons of carbon dioxide from the atmosphere and store it for less than $100 a ton by 2050.

“The benefit of being the energy secretary is that I get to see what the 17 national laboratories are working on,” she says. “And it makes me an extreme optimist about the future, because technology is ultimately going to be our friend in solving this big problem.”

But for carbon capture technology to truly grow and scale, some investors believe there needs to be a price placed on carbon.

The closest the United States has to a financial incentive is a tax credit called 45Q, which offers as much as $35 a ton for carbon dioxide or carbon monoxide stored as part of enhanced oil recovery projects, and as much as $50 per ton for the gases if they’re stored in geologic formations outside of EOP projects.

For now, Granholm is content to rely on the private sector to help create this market.

“In America, we have historically allowed the free market to make these decisions, but other countries have with their state-owned enterprises and their subsidies, partnered or gone in and said, we are going to take control as a government and make sure we make us more competitive. That’s what China does. That’s what other countries do. Well, we don’t do that in America,” she said.

“But what we do do is to create public-private partnerships, and to invest in early-stage technology to help bring down those costs through scale.”