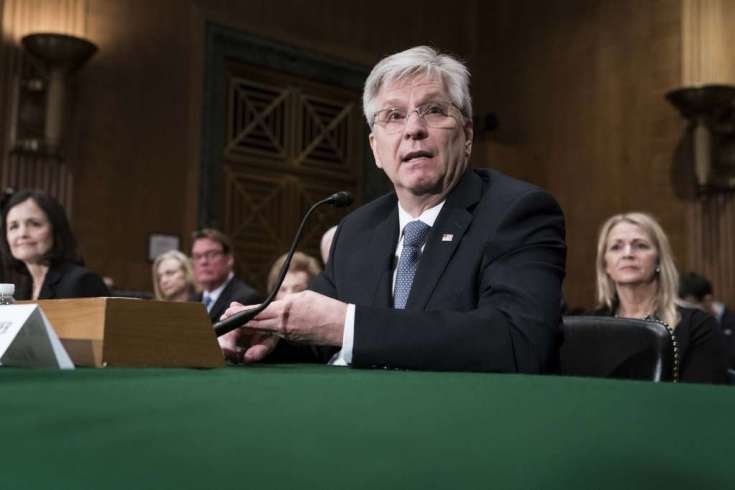 Christopher Waller testifies before the Senate Banking, Housing and Urban Affairs Committee during a hearing on their nomination to be member-designate on the Federal Reserve Board of Governors on February 13, 2020 in Washington, DC.

Federal Reserve Governor Christopher Waller said Monday he sees interest rate increases continuing through the rest of the year as part of an effort to bring inflation under control.

Specifically, the central bank official said he would support hikes that exceed the “neutral” level considered neither supportive nor restrictive for growth.

Estimates Fed officials provided in March point to a 2.5% neutral level, so that means Waller sees rates increasing at least another 2 percentage points from here.

“Over a longer period, we will learn more about how monetary policy is affecting demand and how supply constraints are evolving,” Waller said in remarks delivered in Frankfurt, Germany. “If the data suggest that inflation is stubbornly high, I am prepared to do more.”

The statements support sentiment reflected in minutes from the rate-setting Federal Open Market Committee meeting held in early May. The meeting summary said officials believe “a restrictive stance of policy may well become appropriate depending on the evolving economic outlook and the risks to the outlook.”

Markets currently are expecting the Fed to raise benchmark borrowing rates to a range between 2.5%-2.75%, in line with a neutral rate. However, if inflation continues to rise, the Fed likely will go even further. The fed funds rate currently is set between 0.75% and 1%.

Minutes also indicated that policymakers see rates rising by 50 basis points at the next several meetings. Waller said he is on board with that position, as the Fed seeks to tame inflation running close to its highest level in more than 40 years.

“In particular, I am not taking 50 basis-point hikes off the table until I see inflation coming down closer to our 2 percent target,” Waller said. “And, by the end of this year, I support having the policy rate at a level above neutral so that it is reducing demand for products and labor, bringing it more in line with supply and thus helping rein in inflation.”

Data released Friday indicated that inflation still accelerated in April but at a slower pace. Core personal consumption expenditures, which is the metric the Fed watches closest, increased 4.9% for the month from a year ago, down from 5.2% in March. Headline PCE inflation, including food and energy costs, rose 6.3%, compared to 6.6% the previous month.

Waller added that he thinks the Fed can raise rates and tamp down demand without causing a severe economic downturn. In part, the Fed’s aim will be to reduce labor demand without causing a big rise in the unemployment rate. There are currently 5.6 million more job openings than there are available workers, according to the Bureau of Labor Statistics.

“Of course, the path of the economy depends on many factors, including how the Ukraine war and COVID-19 evolve. From this discussion, I am left optimistic that the strong labor market can handle higher rates without a significant increase in unemployment,” he said.