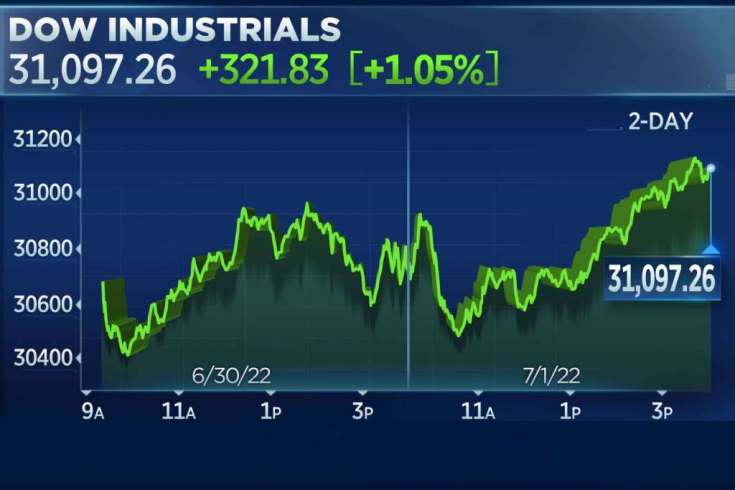 Stocks rose on Friday to start the quarter after the S&P 500 closed out its worst first-half performance in decades.

Homebuilder stocks contributed to the market going higher, with PulteGroup umping 6.5%, while Lennar and D.R. Horton rose more than 5% each. Etsy shares popped 9% to lead the S&P 500 higher.

McDonald’s led the Dow higher with a 2.5% gain. Coca-Cola and Boeing also rose more than 2%.

Investors remained focused on warning signs from several companies that lowered their profit guidance, adding to investor concerns that persistent inflation at decades long highs could continue to put pressure on share prices.

General Motors edged higher by 1.4%, even after the company warned about manufacturing issues in the second quarter that could bring its net income for the quarter to between $1.6 billion and $1.9 billion. Analysts expected GM’s net income to be about $2.5 billion during the second quarter, according to FactSet.

Meanwhile, Micron Technology fell about 3% on the back of disappointing fiscal fourth-quarter guidance. Several other chipmakers fell with it. Nvidia lost 4%. Qualcomm, Western Digital and Advanced Micro Devices pulled back by about 3% each.

Shares of Kohl’s fell 19.6% after the retailer cut its outlook for the fiscal second quarter, citing softer consumer spending, and terminated talks to sell its business, saying the retail environment has deteriorated since the beginning of its bidding process.

Michael Burry of “The Big Short” warned that the rout in financial markets is only halfway through and that corporations will see an earnings decline next.

Baird investment strategy analyst Ross Mayfield echoed Burry’s sentiment, noting that S&P 500 earnings estimates of 10% year-over-year growth are “likely too high” even in a mild economic slowdown. He also emphasized the need to see a peak in inflation, the center point of the myriad factors that generated the stock market’s brutal worst first-half.

“Weakness to date has been almost entirely multiple contraction, earnings are the next shoe to drop,” he told CNBC. “Guidance during Q2 and Q3 earnings season will ultimately dictate the depth of this selloff, but the market likely cannot sustain a new bull market until inflation and inflation expectations are well under control and the Fed can, at a minimum, back off the hawkish rhetoric.”

The Institute for Supply Management said manufacturing activity in June was weaker than expected. Its index of national factory activity dropped to 53 for the month, the lowest reading since June 2020. ISM’s new orders index also fell to 49.2 from 55.1 — showing contraction for the first time since May 2020.

This all came a day after the S&P 500 posted a more than 16% quarterly loss – its biggest one-quarter fall since March 2020. For the first half, the broader market index dropped 20.6% for its largest first-half decline since 1970. It also tumbled into bear market territory, down more than 21% from a record high set early January.

The Dow and Nasdaq were not spared from the onslaught. The 30-stock Dow lost 11.3% in the second quarter, putting it down more than 15% for 2022. The Nasdaq, meanwhile, suffered its biggest quarterly drop since 2008, losing 22.4%. Those losses pushed the tech-heavy composite deep into bear market territory, down nearly 32% from an all-time high set in November. It’s also down 29.5% year to date.

While some on Wall Street are optimistic the market will recover during the remainder of 2022 – history has shown that when the market is down more than 15% in the first half of the year, it tends to rally in the back half – others are preparing for lingering inflation and even more monetary tightening by the Federal Reserve that could set a potential rally back.