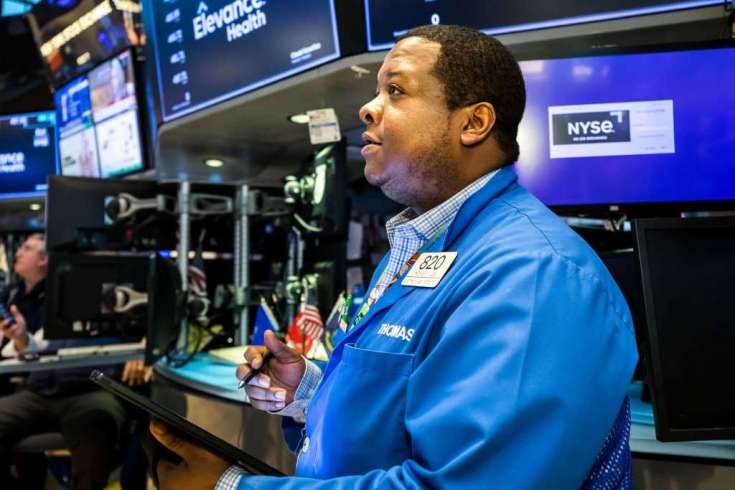 U.S. equities futures were little changed on Wednesday morning after the market staged a big midday reversal on Tuesday, with falling bond yields giving a boost to growth stocks, and ahead of a batch of economic data.

Futures tied to the Dow Jones Industrial Average were close to the flatline. S&P 500 futures and Nasdaq 100 futures were also about flat.

In regular trading, the Dow lost 129 points to start the holiday-shortened week, trimming steeper losses from earlier in the session. The S&P 500 rallied back from a 2% loss in the final hour of trading and finished the day up 0.2%. The tech-heavy Nasdaq Composite outperformed, jumping 1.75%.

Whether the market is about to fall into a recession continued to worry investors after the benchmark 10-year U.S. Treasury yield fell below the 2-year yield. The so-called yield curve inversion historically has been a warning sign that the economy may be falling or has already fallen into recession.

Oil prices tumbled below $100 a barrel Tuesday, further reflecting a potential economic slowdown. Energy stocks were the top decliners Tuesday. The sector as a whole fell 4%. It was the top performing sector in the S&P 500 for the first half of they year, the benchmark index’s worst first half since 1970.

However, Wall Street analysts say a recession could be mild. On Tuesday Credit Suisse said it sees the U.S. dodging a recession as it slashed its year-end S&P 500 target to reflect the effect of higher capital cost on stock valuations.

“[The market] has been bracing for [a recession], and now it may actually be embracing it, the idea being: let’s just get it over with, we’re going have a recession, let’s do it. Let’s clean out the excesses and start all over again,” said Ed Yardeni of Yardeni Research on CNBC’s “Closing Bell: Overtime.”

“The market starting to look ahead into next year and that could very well be a recovery year from whatever this recessionary environment turns out to be,” he added. “We’re all kind of doing a Hamlet recession – to be or not to be. I’m kind of thinking that there’s going to be a mild recession.”

“Do we have a kind of drawdown that looks to be in that 30% range, which is the average for recessions, or something that looks closer to down 50%, which is what we saw back in the early 2000s and 2008 where we had two debt crises?” she said. “We don’t see a debt crisis. We think that we could start to find some value around that 3,400-3,500 level because that’s what gets us back to the pre-Covid highs.”

There are no major earnings reports scheduled for Wednesday, but there will be a slew of economic reports coming out, including the minutes of the Federal Reserve’s June meeting in the afternoon.

Investors are also looking forward to the latest reading on the Mortgage Bankers Association’s mortgage purchase index at 7:00 a.m. ET Wednesday. The latest Markit and Institute for Supply Management manufacturing PMI data will be released at 9:45 a.m. and 10:00 a.m., respectively. The Job Openings and Labor Turnover Survey, or JOLTS, will also be released at 10:00 a.m.