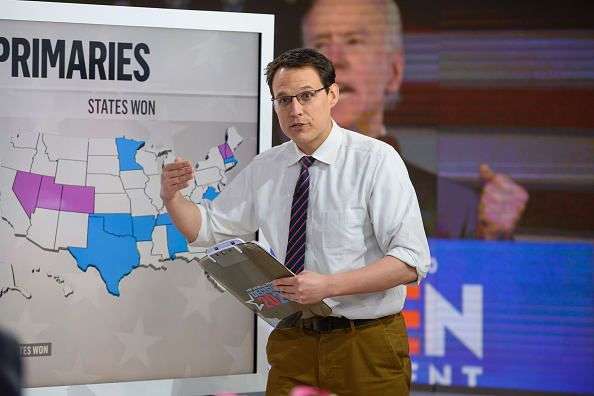 Since Tuesday, MSNBC national political correspondent Steve Kornacki has been running on fumes, living off Diet Coke with little sleep.

Twitter users urging Kornacki to take a break and change his clothes (he’s known for his Gap khakis) have even started the hashtag #freeKornacki.

Kornacki, 41, is in charge of analyzing MSNBC’s electoral big board as votes come in during the 2020 election. (As of Friday, the results of six states are still pending, according to NBC News.)

Ahead of election night, Kornacki told GQ that during this busy time, he lives off Diet Coke — “way too many to count” — to get through the long hours.

“On a normal day, I’ll have a couple,” he said of the diet soda habit. “But on election night, I just keep it nearby and I’m just kind of regularly using it,” (despite the fact that people often remind him that it may not be the healthiest choice), he told GQ.

“Once we start getting election results, I feed off the energy. There’s constant stimulus,” Kornacki said.

Kornacki also said that he has so much adrenaline while covering election results, he often forgets to eat, but finds food “kind of slows me down” anyway, he said.

As for sleep, he doesn’t get much. Even leading up the election this year, he said he was “a little bit more anxious.” “So even on nights when I’m feeling tired when I get home and maybe I can sneak in three or four hours of sleep, I find myself just laying awake,” he told GQ.

To help alleviate stress, Kornacki said he has tried common tactics like mediation and deep breathing, but it hasn’t helped. “I try to do the deep breathing exercises and I end up panicking in the middle of them and it never goes well,” he said.

But the good news is that as soon as the election is over (or at least his part of it), he is ready to crash. “[I] can go from a 100 to zero real quickly,” he said.

These voters switched political parties for 2020

Disclosure: NBCUniversal is the parent company of MSNBC and CNBC.