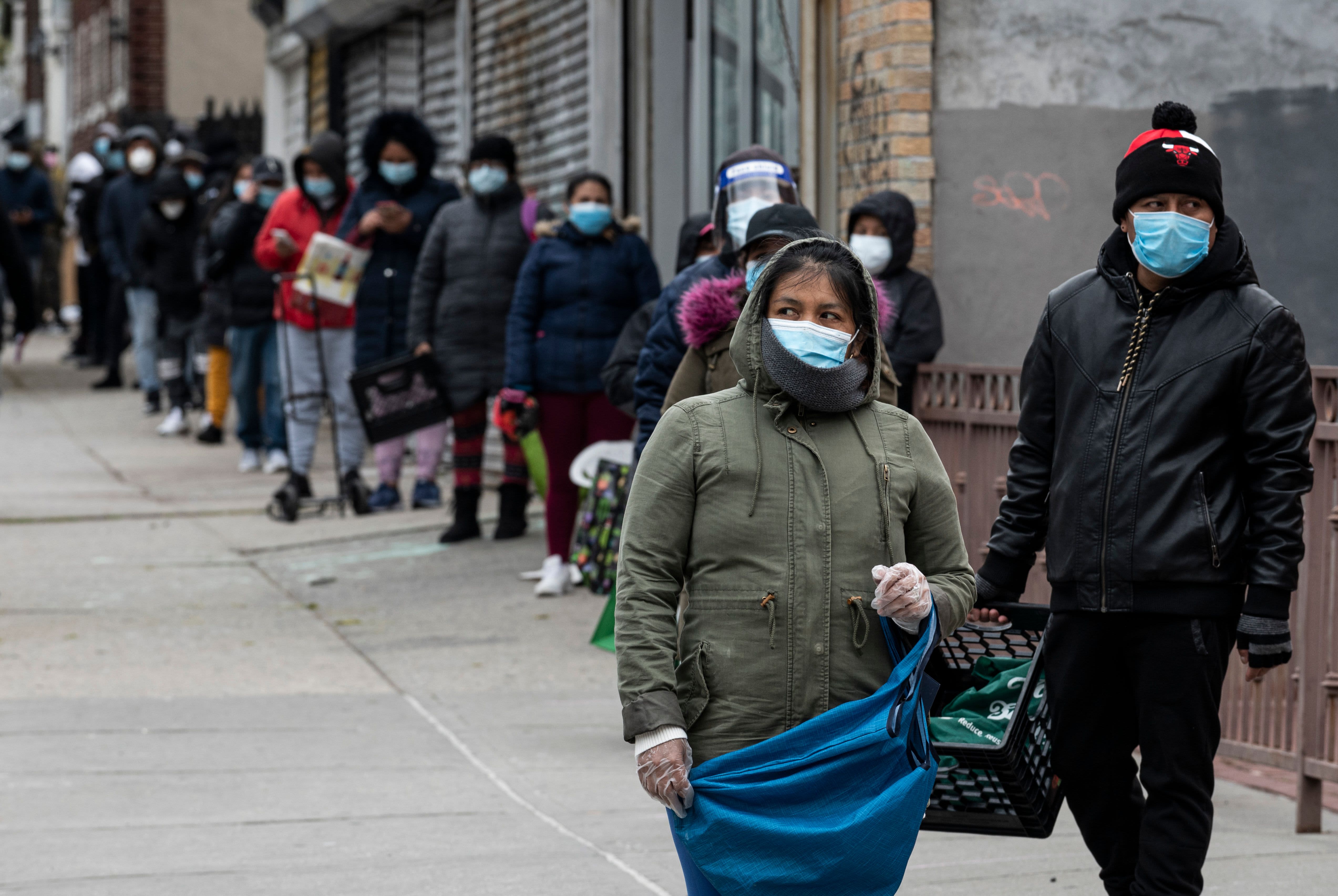 Randy Chase, 57, does masonry work on construction crews. With unemployment benefits stalled since April and no savings left, he’s been living in his pickup truck outside of Denver since September, using an electric heater to keep warm.

Randy Chase has lived in his pickup truck for months.

Luckily, the tiny cab of his 1996 Nissan is easy to heat and that’s a life saver in the sub-freezing winter chill outside of Denver.

So, armed with a gas-powered generator and a small electric heater, the 57-year-old makes do.

Chase has suffered misfortune after misfortune since the spring: Unemployment benefits have been stuck in limbo. Work opportunities have been sporadic. Now, the cold makes it hard to find jobs in his trade, as a mason on construction crews. His savings depleted and his truck partially wrecked by a hit-and-run driver, Chase can’t move somewhere where jobs are more plentiful.

“Having to stand on a freeway off ramp with a sign that says you’re hungry — it’s a new experience for me,” Chase said.

People in need line up at a food distribution center in the Corona neighborhood of Queens in New York.

It has been nine months since the coronavirus pandemic began its assault on American livelihoods. Since then, financial desperation has steadily grown for jobless Americans across the country.

Almost 8 million people have fallen into poverty since the summer. Savings for many, especially the lowest earners, are either dwindling or gone. Millions of households owe thousands in back rent and utilities — and face a renewed threat of eviction in the new year. A growing share of unemployed individuals say their households don’t have enough to eat.

Congress seems close to finalizing a $900 billion Covid relief bill that, as of writing, appears to include extra unemployment benefits, stimulus checks and small-business and rental assistance.

“I hope people in Congress understand the pain and the desperation people are having,” said Bill McCamley, cabinet secretary for the New Mexico Department of Workforce Solutions, which administers the state’s jobless benefits.

“I get e-mails every day, constantly talking about people facing eviction, losing their cars, worried about feeding their kids,” he said.

Adonijah Niles, 26, a single mom with three kids, lost her part-time clerical job in March. Unable to pay all her bills, Niles is behind $5,400 in rent. Her landlord issued an eviction notice this week ordering the family to leave in two weeks.

Adonijah Niles, a single mom, lost her job in mid-March. She had been making about $13 an hour doing part-time clerical work for a hospitality shuttle service.

Now, Niles, 26, is six months behind on rent. She and her three young kids may soon be forced out of their apartment in Watervliet, New York.

Her current income — about $380 a week in pre-tax jobless benefits and $500 in monthly food stamps — isn’t enough to cover the family’s basic living costs. It falls well short of the federal poverty line for a family of four.

On Friday, Niles received an eviction notice. The letter, dated Dec. 16, ordered her to pay arrears — $5,400 — in full within 14 days or vacate the apartment. Otherwise, the landlord, TCIM Properties LLC, will initiate legal action to evict and recover damages, according to the document.

Niles received a similar notice in August, records show. She was protected by a temporary eviction moratorium, but that expires after December.

This is the first time I’ve needed to use unemployment in my entire work history, and the one time I did it just ruined my life. It should be criminal what they are doing to me.

By January, more than 11 million households will owe more than $6,000 in back rent, utilities and late fees, on average — about four months’ worth, according to an estimate from Moody’s Analytics. That’s a collective deficit of $70 billion.

“I think the levels of hardship we see right now, in terms of food insecurity and other measures, are at historic highs,” said Chloe East, an economist at the University of Colorado whose work specializes in the social safety net.

More from Personal Finance:
Second stimulus checks may be coming. Here’s what to do with the money
Nearly 46,000 businesses cut 401(k) contributions during pandemic
Ponzi schemes, other investment fraud on the rise

Unemployment, welfare, food stamps and other social programs replace just 19% of one’s prior wages in the months after job loss, on average, according to a paper published this month by East and David Simon, an economist at the University of Connecticut.

researcher at Columbia University’s Center on Poverty and Social Policy

And unemployment programs, the most important safety net for jobless individuals, are the least protective for the neediest people, East said.

That’s because low earners are disproportionately hurt by wage and work-history requirements imposed by states as a minimum bar to be eligible for aid, she said.

And low wage earners — as well as people of color and those without college degrees — are the very people who have borne the brunt of the country’s job loss since March.

Employment among those paid less than $27,000 a year was still down 20% from pre-pandemic levels in mid-November, according to estimates from Harvard University’s Opportunity Insights project. By contrast, jobs among those making at least $60,000 a year are up 1% from January.

Now, the few jobless benefits some have are at risk of being turned off, if Congress doesn’t extend temporary unemployment programs set to expire in a week’s time.

Failure to do so will push 5 million people into poverty in January, according to a paper published Tuesday by Columbia University’s Center on Poverty and Social Policy.

Randy Chase’s car was busted in a hit-and-run accident, making it difficult to travel to find work.

Nearly 16% of Americans — about 52 million people — were already among the ranks of the poor in November, according to Megan Curran, one of the report authors.

Many jobless Americans have exhausted savings and other financial resources, severely stressing their ability to weather a financial shock, she added.

‘It should be criminal’

Many workers are suffering severe hardship as a result of administrative snafus at unemployment agencies.

Mike Carpenter, 35, has struggled to collect benefits in Pennsylvania since losing his job in the spring.

Without income, Carpenter, who lives in Philadelphia, drained savings and could barely pay bills for a half year, he said. He took on debt to finance basic needs. This week, his car was repossessed. He lost his apartment and has been staying with a friend.

“It wrecked my credit,” said Carpenter, who had been a superintendent for a luxury apartment builder. “I lost pretty much everything.”

Pennsylvania started paying Carpenter $500 a week last month but has withheld all back pay, he said. Now, the state unemployment website indicates he’s only eligible for a few more weeks of benefits.

The state was unable to provide specifics about Carpenter’s claim due to privacy laws, according to Sarah DeSantis, a spokeswoman for the Pennsylvania Department of Labor and Industry.

She directed Carpenter to a customer service e-mail inbox to communicate questions and complaints. Carpenter says he’s sent countless e-mails to the agency, generally receiving no answer or a response that’s been of limited help.

“This is the first time I’ve needed to use unemployment in my entire work history, and the one time I did it just ruined my life,” Carpenter said. “It should be criminal what they are doing to me.”

Randy Chase has slept in his 1996 Nissan pickup truck in the Denver suburbs since September.

Randy Chase, the unemployed worker outside Denver, has also had a lengthy fight for benefits.

He initially applied to the California Employment Development Department for aid in April, having worked in the Golden State before heading to Colorado.

The Colorado Safe Parking Initiative, a volunteer-led nonprofit, makes safe, legal parking spots available to homeless individuals sheltering in their cars. Above, a view from the parking lot where Randy Chase has been staying.

Through it all, Chase has tried remaining in good spirits. He celebrates the small victories — in November, he found a parking lot with an electric outlet, saving $5 in daily gas to run his generator. He then received help from the Colorado Safe Parking Initiative, a volunteer-led nonprofit that makes safe, legal parking spots available to homeless individuals sheltering in their cars.

After months of continual setback, it seems Chase’s luck has changed for the better. He received a call from the California labor agency on Thursday, following a CNBC inquiry, apologizing for the error and informing him of the imminent release of owed funds.

He received a deposit of $11,000 on Friday and expects another $3,000 soon, followed by regular weekly installments.

A spokesperson for the California unemployment agency didn’t return a request for comment.