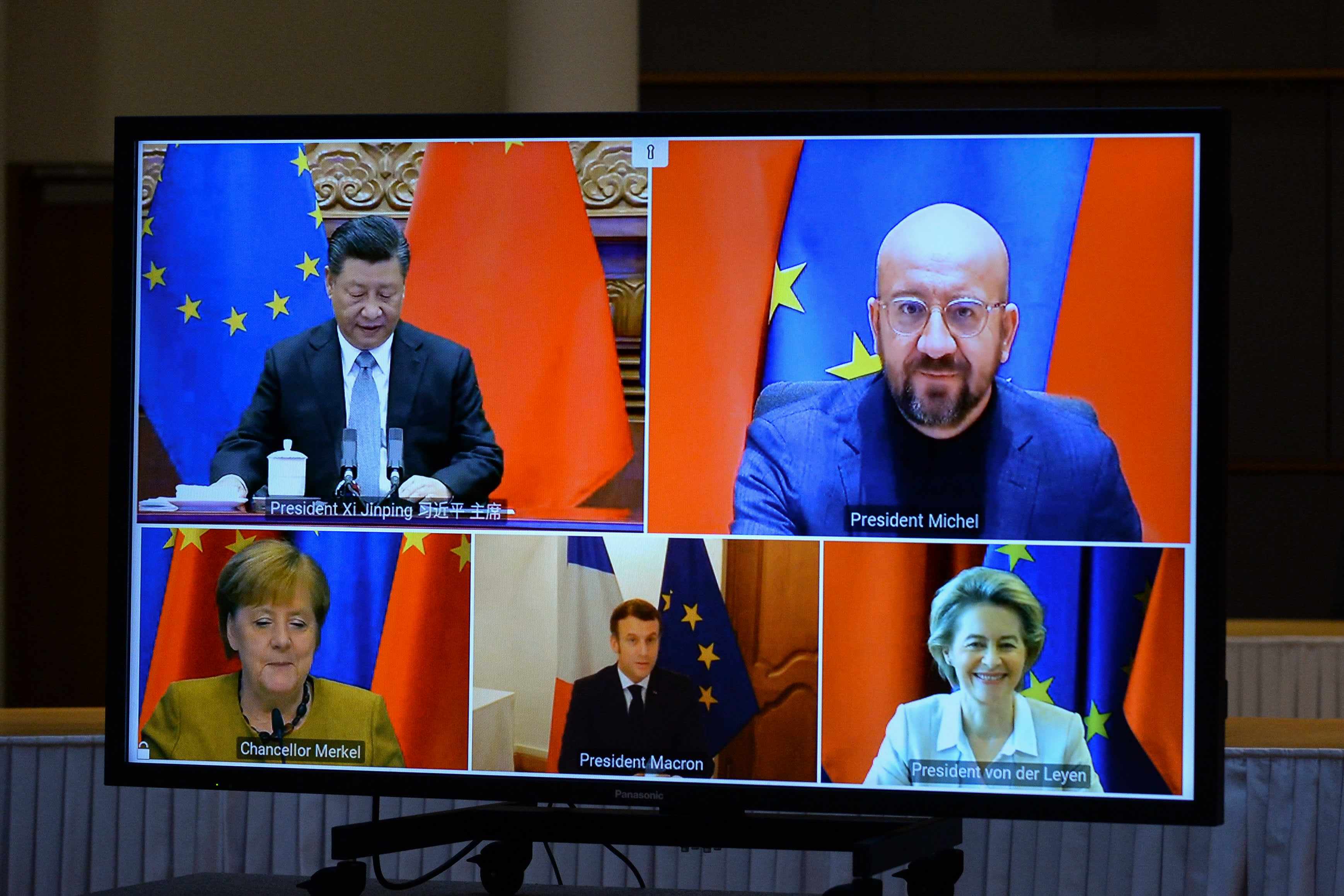 BEIJING —  China wrapped negotiations with the European Union on an important investment deal and talked up hopes for more, less than a month before U.S. President-elect Joe Biden is set to take office.

China and the European Commission announced Wednesday that the two sides finished talks around a “Comprehensive Agreement on Investment” that gives each region’s businesses more access to the other’s market.

Both sides rushed to get a deal done — Biden is widely expected to marshal the support of traditional American allies to put pressure on China after he takes office, in contrast to the Trump administration. On the European side, there was a desire to finish an agreement before the end of Angela Merkel’s term as German chancellor in 2021, according to a source with the European Union Chamber of Commerce in China.

Negotiations had stalled this year, prior to the U.S. presidential election.

The crucial point at the moment is how the EU and the US work better together to manage relations with China, and I think there’s a real prospect for that with a Biden administration.

president and CEO of the Atlantic Council

The EC said China agreed to prohibit “distortive practices” including forced technology transfers — the practice of making companies hand over proprietary tech in exchange for access to the Chinese market.

“China has committed to an unprecedented level of market access for EU investors, giving European businesses certainty and predictability for their operations,” the European Council said in a release.

“The Agreement will also significantly improve the level playing field for EU investors by laying down clear obligations on Chinese state-owned enterprises, prohibiting forced technology transfers and other distortive practices, and enhancing transparency of subsidies,” the statement said.

The Chinese side reinforced that the two parties agreed on that list of contentious issues — all of which have been raised previously by the United States. The U.S. and China have been locked in a trade war for more than two years, with the dispute spilling into technology, finance and beyond.

At a late-night press conference on Wednesday, China’s Ministry of Commerce Spokesman Gao Feng signaled that the deal could help set the stage for restoring normal trade relations with the U.S., under certain conditions.

However, part of the rising U.S. frustration is that China has not always lived up to its agreements in the way negotiators initially hoped.

“The crucial point at the moment is how the EU and the U.S. work better together to manage relations with China, and I think there’s a real prospect for that with a Biden administration,” said Fred Kempe, president and CEO of the Atlantic Council. “The question I would ask is, does this agreement advance that or set it back.”

“What the EU will have to do is argue to Washington [that] the standards in this agreement are such that [the United States] would approve of them as well,” Kempe said.

Beijing has fallen short of the purchases of U.S. imports it agreed to in a so-called “phase one” trade deal it reached with the U.S. in January, according to analysis from the Peterson Institute for International Economics. That truce in the trade war had mandated greater U.S. access to markets such as China’s finance industry.

Progress toward a “phase two” deal stalled amid the coronavirus pandemic.

Analysts have pointed out that Beijing wants to build further agreements both to diversify its trading partners and to prepare for a new U.S. approach under Biden. Already this fall, China and 14 other countries — but not including the United States — formed the largest trade pact in history when they signed the Regional Comprehensive Economic Partnership.

At the beginning of 2017, the U.S. was set to lead an almost identical Asia-Pacific deal that excluded China, called the Trans-Pacific Partnership, or TPP. But Trump scuttled the TPP immediately after his inauguration. It had been negotiated by the Obama Administration.

Gao took the time Wednesday to tell reporters about hopes for deals with other countries. He emphasized China’s plans for a new trade agreement with Japan and South Korea. He added China would like to deepen existing agreements with countries such as Singapore, Chile and New Zealand.

Perhaps significantly, Gao did not mention Australia — one of the few developed nations that enjoys a trade surplus with China. Australia drew Beijing’s anger this year by joining with other countries in demanding an investigation into the origin of Covid-19.

‘Not a deal against America’

The EU-China investment deal, about seven years in the making, still needs to be translated and reviewed before being signed. A possible sticking point for the Europeans is alleged forced labor in China’s Xinjiang region. China has committed to work toward ratification of International Labour Organization conventions including one on forced labor.

Joerg Wuttke, president of the European Union Chamber of Commerce in China, said that “for the European side it was really bilateral. It was an attempt to conclude negotiations. This is not a deal against America.”

Wuttke added the talks showed “real improvement in market access” for European businesses and there will be “more openness” in industries such as electric vehicles, renewable energy and finance.

Li Yongjie, an official for treaty and law at the Commerce Ministry, said during Wednesday’s press conference the deal will permit more European investment in services and non-services industries, and mentioned sectors such as automobiles, hospitals and information technology.

The agreement provides legally binding commitments for China to access the European market, she said.