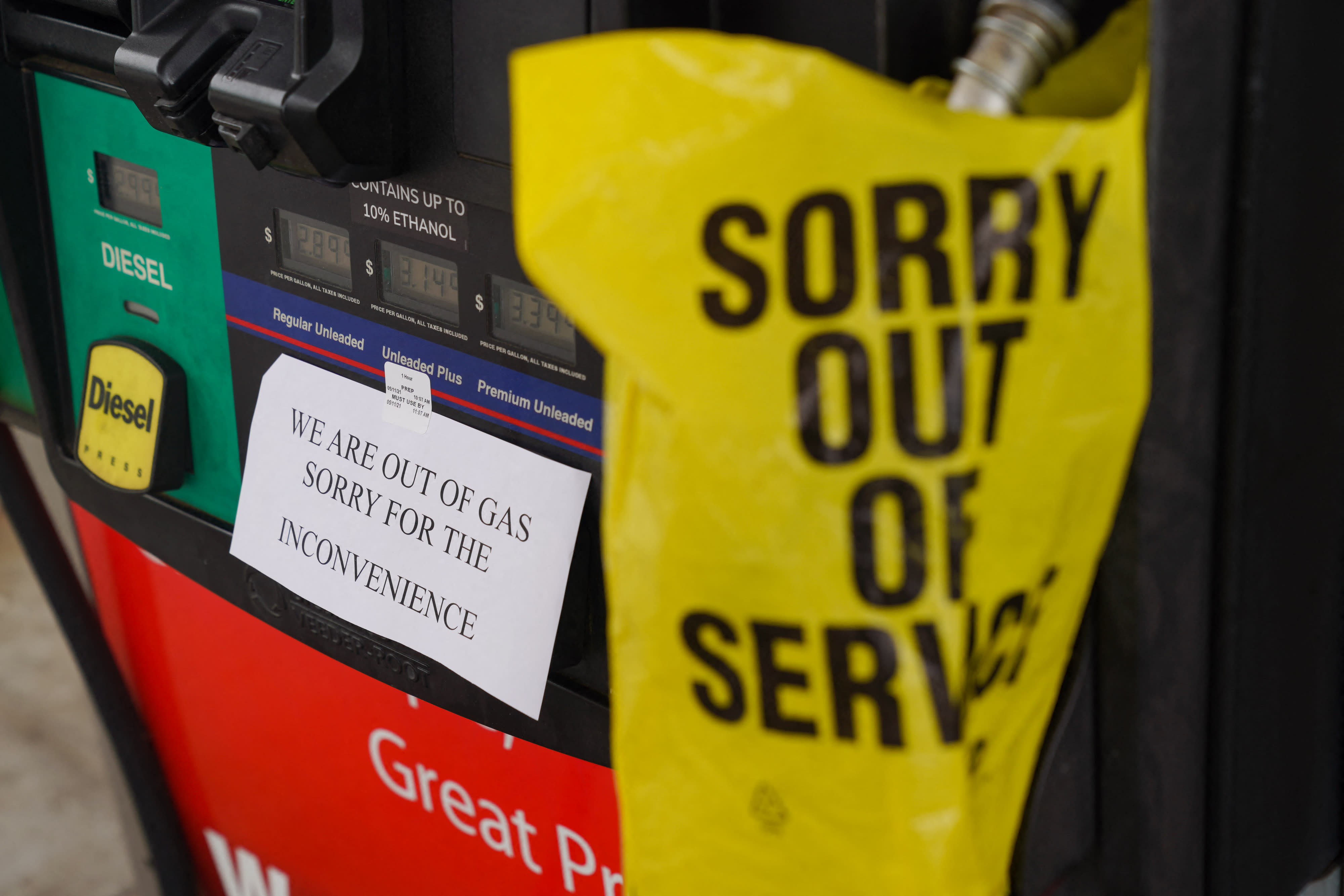 A sign warns consumers on the avaliability of gasoline at a RaceTrac gas station on May 11, 2021, in Smyrna, Georgia.

WASHINGTON – U.S. law enforcement officials said Monday they were able to recover $2.3 million in bitcoin paid to a criminal cybergroup involved in the crippling ransomware attack on Colonial Pipeline.

“Today we turned the tables on DarkSide,” Lisa Monaco, Department of Justice deputy attorney general, said during a press briefing, adding that the money was seized via a court order.

Alongside Monaco, FBI Deputy Director Paul Abbate explained that agents were able to identify a virtual currency wallet that the DarkSide hackers used to collect payment from Colonial Pipeline.

“Using law enforcement authority, victim funds were seized from that wallet, preventing Dark Side actors from using them,” Abbate said.

The FBI declined to say precisely how it accessed the bitcoin wallet, citing the need to protect tradecraft.

But Elvis Chan, assistant special agent in charge, told reporters that even foreign-based cybercriminals like DarkSide typically use American infrastructure at some point in the course of a crime. When they do, it gives the FBI a legal window to recover the funds.

DarkSide operates as a “ransomware as a service” business model, which means its hackers develop and market ransomware hacking tools, and sell them to other criminal “affiliates” who then carry out attacks.

It is still unclear who DarkSide’s affiliates were in the Colonial Pipeline attack.

Deputy U.S. Attorney General Lisa Monaco announces the recovery of millions of dollars worth of cryptocurrency from the Colonial Pipeline Co. ransomware attacks as she speaks during a news conference with FBI Deputy Director Paul Abbate and Acting U.S. Attorney for the Northern District of California Stephanie Hinds at the Justice Department in Washington, June 7, 2021.

Last month DarkSide launched a sweeping ransomware assault on Colonial Pipeline. The cyberattack forced the company to shut down approximately 5,500 miles of American fuel pipeline, leading to a disruption of nearly half of the East Coast fuel supply and causing gasoline shortages in the Southeast.

Colonial Pipeline paid nearly $5 million ransom to the hackers, one source familiar with the situation confirmed to CNBC. It was not immediately clear when the transaction took place.

The FBI has previously warned victims of ransomware attacks that paying a ransom could encourage further malicious activity.

The government has stopped short of moving to ban ransomware payments altogether, out of concern that it would have little impact on whether or not companies pay ransoms and simply discourage them from reporting attacks.

The public announcement was part of a broader effort to counter the private sector’s longstanding reluctance to publicly report cyberattacks and involve the government in its responses.

“The message here today is that [if you report the attack], we will bring all of our tools to bear to go after these criminal networks,” Monaco said.

Officials stressed the advantages to be gained by companies that report cyber breaches quickly to the FBI.

“Victim reporting not only can give us the information we need to have an immediate real-world impact on the actors … it can also prevent future harm from occurring,” Abbate said.

“The private sector also has an equally important role to play and we must continue to take cyber threats seriously and invest accordingly to harden our defenses,” Colonial Pipeline CEO Joseph Blount said in a statement Monday evening.

“As our investigation into this event continues, Colonial will continue its transparency in sharing intelligence and learnings with the FBI and other federal agencies,” he said.

After the attack by DarkSide, President Joe Biden told reporters that the U.S. did not currently have intelligence linking the group’s ransomware attack to the Russian government. Although, the assault is believed to have originated from a criminal organization in Russia.

“So far there is no evidence from our intelligence people that Russia is involved although there is evidence that the actor’s ransomware is in Russia, they have some responsibility to deal with this,” Biden said on May 10. He added that he would discuss the situation with Russian President Vladimir Putin.

The two leaders are slated to meet in Geneva on June 16.

The Kremlin has denied that it launched cyberattacks against the United States.

“The President’s message will be that responsible states do not harbor ransomware criminals, and responsible countries must take decisive action against these ransomware networks,” White House press secretary Jen Psaki told reporters in advance of the summit.

The Biden administration is also putting pressure on the private sector to shore up its defenses against ransomware.

“All organizations must recognize that no company is safe from being targeted by ransomware, regardless of size or location,” wrote Anne Neuberger, deputy national security advisor for cyber and emerging technology, in a June 2 memo.

“To understand your risk, business executives should immediately convene their leadership teams to discuss the ransomware threat and review corporate security posture and business continuity plans to ensure you have the ability to continue or quickly restore operations,” she added.

At the same time, the White House is grappling with how to modernize cybersecurity protocols and banking laws to respond to cryptocurrency and its growing role in financial crimes, from ransomware to corruption.

The prevalence of cryptocurrency in crimes like ransomware attacks has also drawn the attention of lawmakers on Capitol Hill.

“We have a lot of cash requirements in our country, but we haven’t figured out, in the country or in the world, how to trace cryptocurrency,” Missouri GOP Sen. Roy Blunt said Sunday on the NBC program “Meet the Press.”

“You can’t trace the ransomware — the ransom payment of choice now. And we’ve got to do a better job here,” he added.