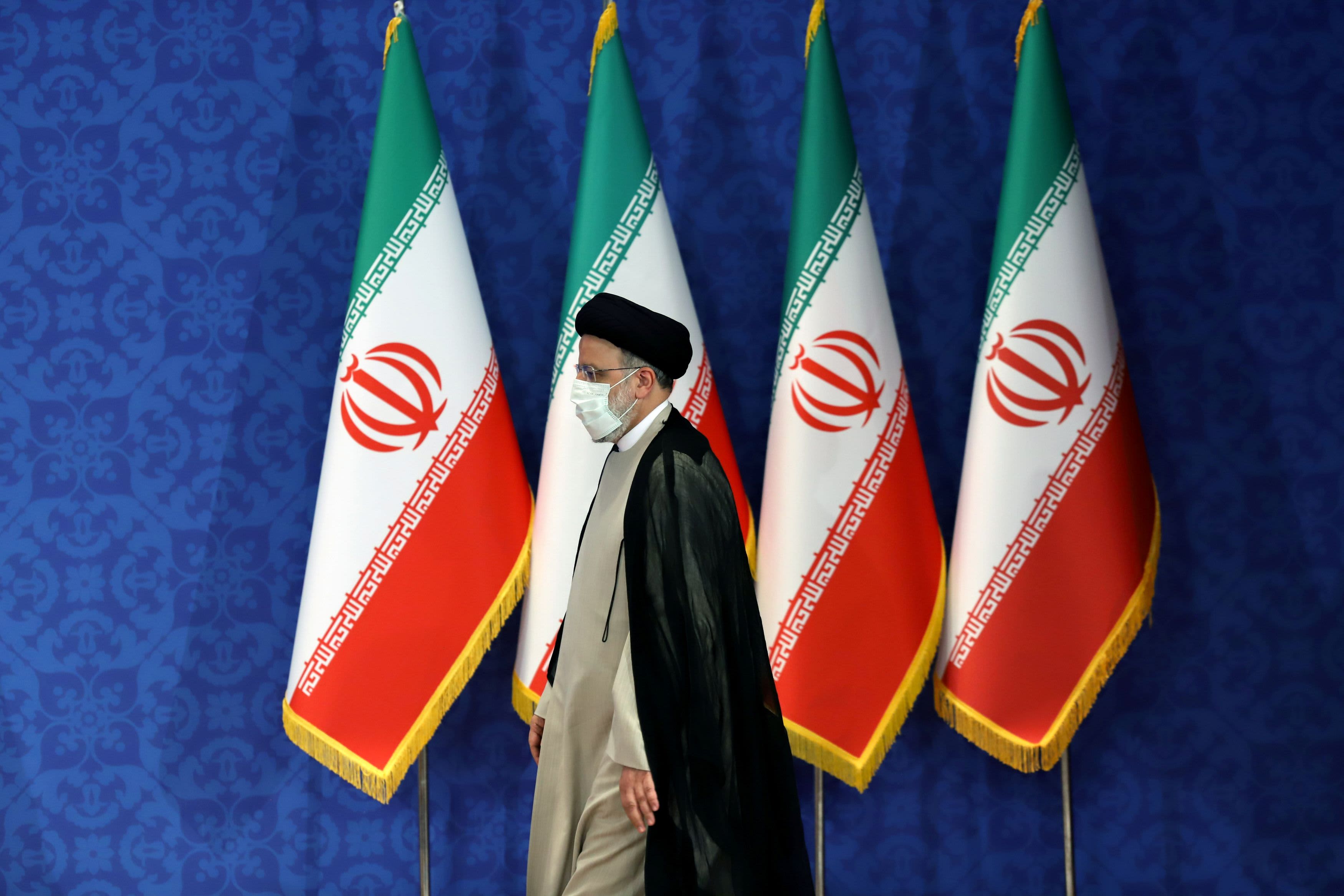 DUBAI, United Arab Emirates — Iranian President-elect Ebrahim Raisi gave his first press conference since the country’s election, saying Monday his priorities would be to improve ties with regional neighbors and revive the 2015 nuclear deal — and at the same time squarely ruling out meeting with U.S. President Joe Biden.

“We support the negotiations that guarantee our national interests. … America should immediately return to the deal and fulfill its obligations under the deal,” Raisi, the hardline cleric who is himself under U.S. sanctions, said according to a Reuters translation.

The 2015 Joint Comprehensive Plan of Action, or JCPOA, lifted sanctions on Iran in exchange for curbs to its nuclear program.

The JCPOA, brokered by the Obama administration, lifted sanctions on Iran that had crippled its economy and cut its oil exports roughly in half. In exchange for billions of dollars in sanctions relief, Iran agreed to dismantle some of its nuclear program and open its facilities to more extensive international inspections.

Alongside the United States, France, Germany, the U.K., Russia and China ⁠were also signatories of the agreement.

In 2018, then-President Donald Trump kept a campaign promise and unilaterally withdrew the United States from the JCPOA calling it the “worst deal ever.” Trump also reintroduced sanctions on Tehran that had been previously lifted.

Following Washington’s exit from the landmark nuclear deal, other signatories of the pact ⁠have struggled to keep the agreement alive.

When asked at the White House on Monday, press secretary Jen Psaki told reporters that the position of the Biden administration had not changed since the U.S. does not have diplomatic relations with Tehran.

“Well, we don’t currently have  diplomatic relations with Iran and we don’t have plans to meet at the leader level,” Psaki said. “The Iran nuclear negotiation teams just finished six rounds of talks and have not yet announced the seventh round,” she said, adding the administrations is hopeful for a path forward.

Tehran has since ramped up its nuclear activity far beyond the deal’s limits in what it says is a protest against the sanctions — sanctions that Washington says it will not lift until Iran reverses its increased nuclear activity, such as increased uranium enrichment and stockpiling.

And despite ongoing negotiations between JCPOA signatories in Vienna and talk of “progress,” the two adversaries still appear to be at a stalemate on major sticking points, such as Iran’s transparency with nuclear inspectors.

Markets are now watching the talks and Raisi’s messages to glean what this might mean for the world’s supply of oil.

Iran’s oil exports were slashed to a mere fraction of what they once were as a result of Trump’s sanctions. A revival of the deal and lifting of the levies could bring back 3.8 million barrels per day of oil to the market over time from a current 2.1 million bpd, Iranian oil ministry officials say. But that could be a long process due to underinvestment in oilfields and its recent years of reduced output.

The deal “if revitalised, would provide a substantial lift to Iran’s economy — it could plausibly expand by 8-10% per year in 2021-23,” Jason Tuvey, senior emerging markets economist at London-based consultancy Capital Economics, wrote in a note before the election. But he added that its higher crude production would pressure other dynamics in the region.

“Higher Iranian oil output would act as a drag on global oil prices and could prompt governments in the Gulf countries to keep fiscal policy tight, weighing on their recoveries,” Tuvey said.

If and once Iran is able to return to the global oil market, there won’t be any shortage of demand for it, according to Herman Wang, senior oil writer at Platts.

“Many of Iran’s former oil customers, particularly in Asia, have said they are eager to resume buying, as soon as they get the sanctions all-clear,” Wang said. He added that many of Asia’s refineries are well-suited to Iranian crudes, “which would add competition for neighboring Saudi Arabia, Iraq, Oman and other producers of heavier, sourer grades, and Iranian condensate would vie with similar condensates produced by Qatar, the U.S. and Australia.”

“This could well put pressure on oil prices, though OPEC and its allies will be hoping that rising demand will mean a bigger pie for everyone,” Wang added.

No ‘imminent return’ of Iranian oil?

“At this stage we’re still watching the negotiations among JCPOA parties in Vienna as the more significant variable for oil prices in the near term,” Ed Bell, director of commodities research at Dubai-based bank Emirates NBD, told CNBC.

Despite Raisi’s signal that he would support a deal, “that doesn’t address the differences that still exist among JCPOA parties, including the fact that Raisi himself is under U.S. sanctions,” he said.

“The timeline for a return of freely exportable Iranian crude keeps getting pushed back later into 2021 and as such we don’t see any imminent return that would help to alleviate the tightness currently in the market,” Bell added.

The oil market doesn’t seem too bothered by the prospect of a revived deal; international benchmark Brent crude continued its steady upward climb on Monday, trading at $74.65 a barrel at noon ET, up 45% year to date and up 70% from this time last year.

A more pressing longer-term issue, Bell said, would be how a Raisi administration positions its relationship within OPEC and its oil-producing allies. Would Iran accept a production quota if sanctions are lifted, or would it try to maximize its market share to compensate for lost time?

“While Iran on its own wouldn’t be enough to push oil markets back into surplus this year, a race for market share could push other members of OPEC+ to do the same and risk putting downward pressure on oil prices,” Bell said.

CNBC’s Amanda Macias contributed to this report from Washington.