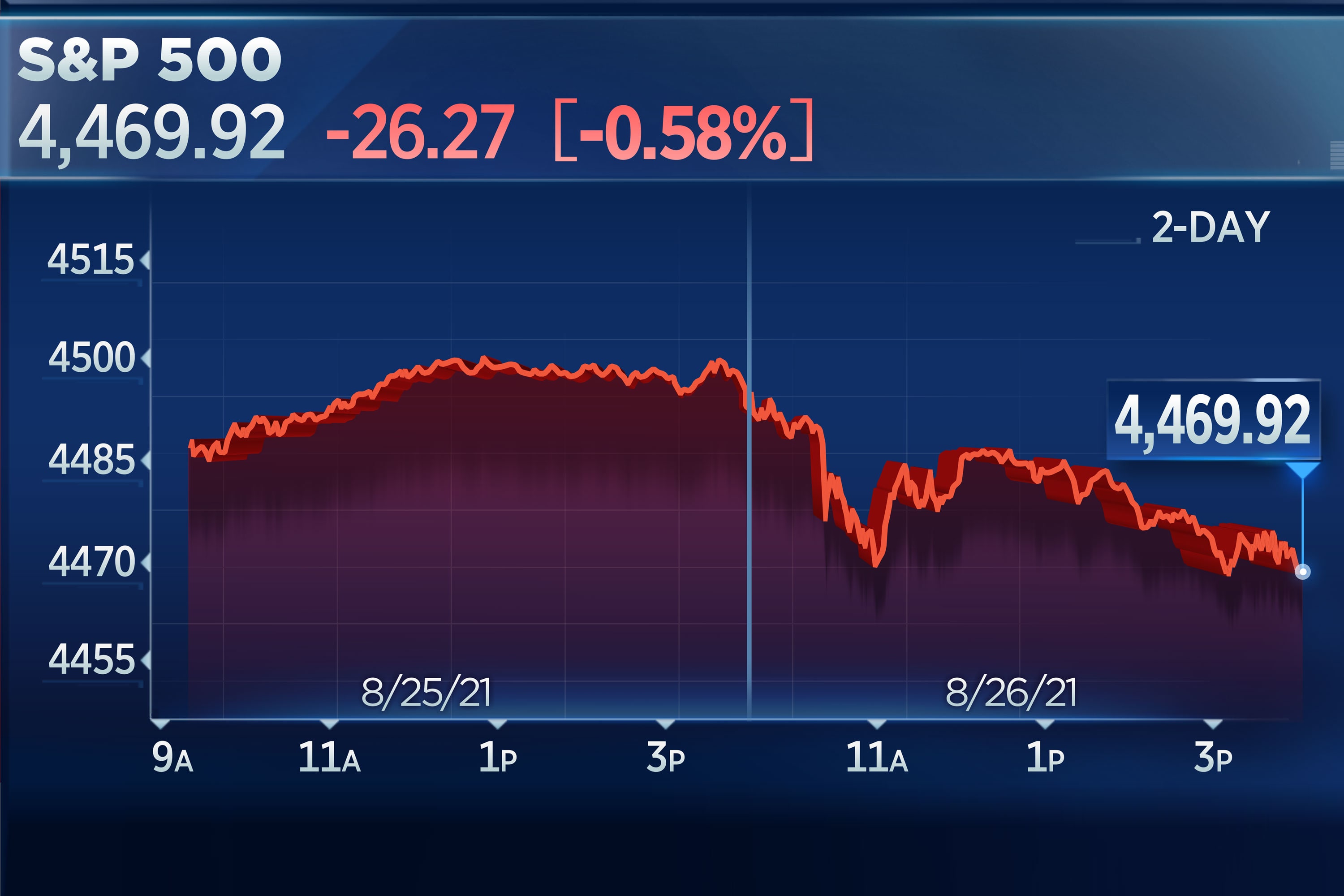 The S&P 500 fell from a record on Thursday as investors awaited more details on the Federal Reserve’s plan to pull back on monetary stimulus from the central bank’s annual symposium on Friday.

Traders were also eying new developments in Afghanistan, which added to the risk-off sentiment. The Pentagon confirmed 12 U.S. service members were killed and 15 wounded after two explosions went off outside the Kabul airport Thursday.

Mixed economic data did little to change the sour mood. Weekly initial jobless claims came in at 353,000, the Labor Department reported Thursday, a slight increase from the prior week’s 349,000 and more than economists expected.

Economic growth totaled 6.6% in the second quarter, according to the Commerce Department’s second reading released on Thursday. That was a slight revision upward from the 6.5% annual increase previously reported, but slightly lower than the Dow Jones estimate of 6.7%.

The highly anticipated Jackson Hole symposium from the Fed will be held virtually this year on Friday, with many central bank speakers making remarks to the media beginning Thursday. At the event, central bankers could provide updates on their plan around tapering the Fed’s monthly bond purchases.

Esther George, president of the Kansas City Fed, told CNBC Thursday morning that “given the progress we’ve seen,” Fed tapering is “appropriate,” though she didn’t specify when she thinks it should start.

James Bullard, St. Louis Fed president, said the central bank should begin those efforts soon and wrap them up by the end of March to prevent the U.S. economy from overheating.

“I think we want to get going on taper. Get the taper finished by the end of the first quarter next year,” Bullard told CNBC Thursday. “And then we can evaluate what the situation is and we’ll be able to see at that point whether inflation has moderated and if that’s the case we’ll be in great shape. If it hasn’t moderated, we’re going to have to be more aggressive to contain inflation.”

The yield on the benchmark 10-year Treasury note rose as high as 1.375% Thursday — the highest level since earlier in the month, when it yielded as high as 1.379% — on the hawkish comments from the Fed officials, before pulling back to 1.344% in the afternoon.

“The 10-year Treasury bond yield has continued rising in recent days and exploded higher in [Wednesday’s] trading, sending a strong message that the delta variant of Covid may be peaking in the U.S. which should improve confidence, restart economic reopenings, and drive investment flows toward small caps and cyclicals,” said Jim Paulsen, chief investment strategist at the Leuthold Group.

Federal Reserve Chairman Jerome Powell is slated to make remarks on Friday as part of the central bank’s summit. The Fed has been purchasing at least $120 billion of bonds per month to bolster the economy in reaction to the pandemic.

“Expect investors to keep an eye on the Fed’s symposium the rest of this week for any comments about tapering or timing for interest rate hikes,” Paulsen said. “Either unexpected commentary from the Fed or a failure or success in scaling 4,500 could bring additional volatility to the stock and bond markets.”