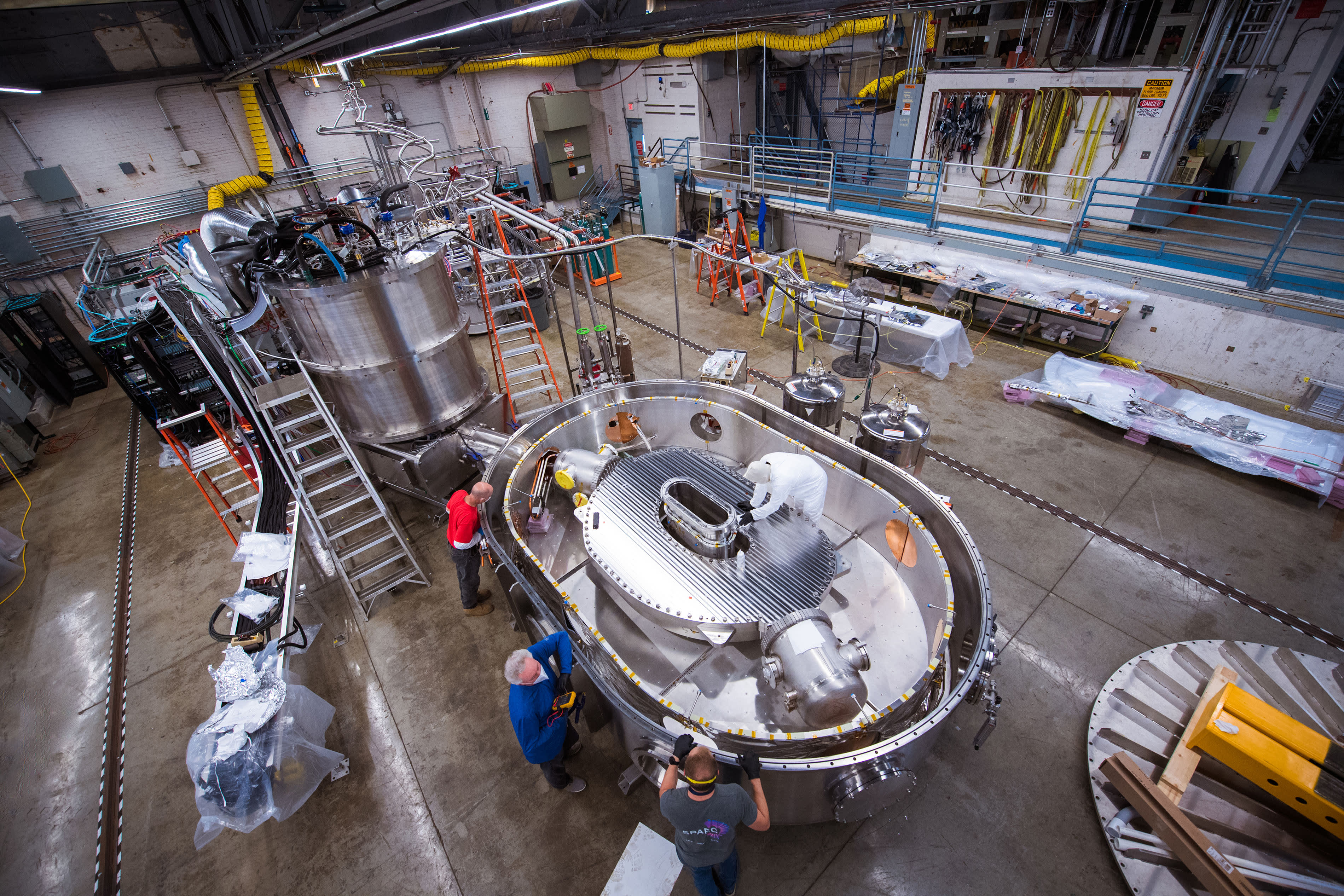 The CFS and MIT teams working on the magnet.

It did this while consuming only about 30 watts of energy — several orders of magnitude less than the traditional copper-conducting magnet that MIT had tested previously, which used 200 million watts, said Dennis Whyte, Director of MIT’s PSFC and a co-founder of CFS, on a conference call with reporters on Wednesday.

Nuclear fusion is the reaction that powers the sun and the stars. It occurs when two smaller, lighter nuclei merge together to form a single heavier nucleus, releasing energy.

If fusion can be achieved on earth and commercialized, it will provide a nearly unlimited source of clean energy without producing the waste of nuclear fission, which can remain radioactive for thousands of years.

In a donut-shaped fusion machine, called a tokamak, magnets hold and insulate burning plasma for nuclear fusion reactions to occur.

The new magnet from CFS and MIT is strong enough that when the team builds a its donut-shaped fusion machine, called a tokamak, with these magnets, it will be able to achieve “net energy,” meaning that the fusion machine makes more energy that it takes to initiate and sustain the reaction, CFS and MIT’s PSFC said.

So far, no company has been able to achieve net energy fusion. So far, all of the energy created by fusion reactions is usurped in initiating and sustaining the reaction.

“Nobody — no companies, universities, national labs, or governments — have achieved the goal of break-even fusion to date,” Andrew Holland, Chief Executive Officer of the Fusion Industry Association, told CNBC.

The scientists and engineers at CFS and MIT’s PSFC said the successful performance of their new magnet technology is a key step in their technological development of commercialized fusion.

“This magnet will change the trajectory of both fusion science and energy, and we think eventually the world’s energy landscape,” said Whyte.

The performance of these magnets give Holland confidence that CFS and MIT’s PSFC will be able to achieve the goal of commercialized fusion. “Its a big deal,” Holland told CNBC.

“This is not hype, this is reality. With advances from across the fusion industry, we’re seeing a new, clean, sustainable, always available energy source being born,” Holland said.

Team members from CFS and MIT here are lowering the superconducting magnet into the test stand.

To build the magnets that are able to reach 20 tesla in their experiment on Sunday, CFS and MIT used high temperature superconductors.

“The scale and performance of this magnet is similar to a non-superconducting magnet that was used in the MIT experiment that concluded its experiments five years ago,” Whyte said. But “the difference in terms of energy consumption is rather stunning.”

CSF is pre-revenue and has raised more than $250 million from a handful of investors, including Breakthrough Energy Ventures, the high-profile sustainability investment fund which counts Bill Gates, Jeff Bezos, Richard Branson and Ray Dalio as backers.

The high temperature superconducting magnet demonstrated on Sunday will be used in its test fusion device, called SPARC, which is already under construction in Devens, Mass., and is and on track to demonstrate net energy from fusion by 2025, the teams said.

Its first fusion power plant, called ARC, is slated to be online by the early 2030’s.

SPARC is “not a commercial system in the sense that you can rely on it for 30 years to sit there and pump out electricity to people who if it’s not running, their lights go out,” Bob Mumgaard, the CEO of CFS, said on a conference call with reporters on Wednesday.

The difference between SPARC and ARC (which are not acronyms so technically they don’t stand for anything) is “the reliability and the lifetime,” Mumgaard said. First you build a test plane, and then the passenger plane, Mumgaard said.

SPARC “is doing most of the things that the passenger plane is doing, but not quite all of them,” Mumgaard said. “It’s doing it in a way that’s flexible, that we can try out, that we can we can break and fix it … so that we develop the technologies and supply chains that you need to build the next one.”