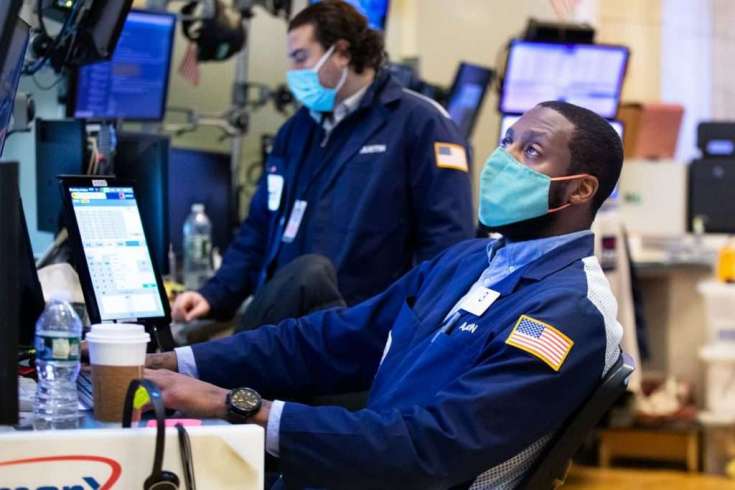 The heavy new round of sanctions on Russia by the U.S. and its allies are likely to push oil prices — and inflation — even higher.

That could create a bigger challenge for the Federal Reserve as it considers interest rate hikes, and add to tighter financial conditions in general. Economists see energy as a big driver of inflation, but if oil prices get high enough, they also can choke the economy.

For now, the sanctions on Russia’s banking system by the U.S. and others do not appear to be resulting in broad stress in financial markets, even though it’s unclear how much Russian oil could ultimately be kept off the market.

Investors turned to the Treasury market, pushing the 10-year yield to 1.8%. The dollar was off the highs it reached in overnight trading, and gold was up about 1% as investors sought safer assets.

Russian assets sold off, and the ruble was down more than 20%. Even though the U.S. did not directly sanction Russian energy, strategists believe the measures will reduce the amount of that nation’s oil that flows onto the market. Moscow is one of the world’s largest energy producers, exporting about 5 million barrels a day. It is also a major exporter of natural gas, accounting for more than a third of Europe’s supply.

“Whatever happens with oil will reverberate across all the other markets … even though the sanctions so far are not aimed at restricting oil. They are restricting activities by buyers and financiers of oil,” said Daniel Yergin, IHS Markit vice chairman. “Russian supplies will be disrupted, but whether they’re manageable or larger will really be determined by events and by the risks buyers and suppliers are willing to take.”

The U.S. Treasury announced a historic move against Russia’s central bank Monday, sanctioning a G-20 central bank for the first time. The Treasury, in essence, has barred Americans from doing any business with the bank as well as freezing assets that are in the United States.

On Saturday, the U.S., European allies and Canada agreed to remove key Russian banks from the interbank messaging system, SWIFT. The exclusion from SWIFT — the Society for Worldwide Interbank Financial Telecommunications — means Russian banks will not be able to communicate securely with banks outside of Moscow.

“I think the markets are behaving… . The markets are fairly orderly,” said Marc Chandler, chief market strategist at Bannockburn Global Forex. “It seems to be like the net effect of this is like both blades of the scissors. That means we’re going to get higher inflation … but we are also going to get slower growth.”

Chandler said the market is also pricing a less aggressive Federal Reserve. The Fed is widely expected to raise interest rates by a quarter point in March, but traders had bet before the crisis on a 50-basis-point hike. Odds of that have fallen to less than 15%, Chandler said. A basis point is equal to 0.01%

Chandler said the market is also pricing in just over five hikes for next year, after pricing in closer to seven.

But Barry Knapp, founder of Ironsides Macroeconomics, said the jump in energy prices could motivate the Fed to be more aggressive.

“It won’t change the reaction function immediately, but it should,” he said. “I think the energy price passthrough is going to be higher than it was anytime over the last three decades. This is going to increase the pressure on the Fed over time. Higher energy prices are going to bleed into higher prices.”

Helima Croft, head of global commodities strategy at RBC, noted that it’s early in the sanction process and it’s unclear if Russian energy will ultimately be targeted. For now, she said, it is difficult to determine how much the new sanctions will keep Russian oil off the market, and exactly what it means for prices.

“Does Russian oil become a toxic asset from the standpoint of energy transactions? I think we should look to the actions taken from BP and Equinor and some of the banks that have pulled out of trade finance over the last 24 hours,” she said. “We suspect they are not full blocking sanctions, but the EU and U.S. are holding sanctions in reserve.”

BP announced it was offloading its near 20% stake in Russia’s state-owned oil company Rosneft. Equinor said it would begin the process of divesting from its Russian joint ventures.

Analysts said the direction of the markets will be driven by the actions of Russian President Vladimir Putin, and whether he continues the attack.

“In this type of situation, the credit offices of the banks shut it down,” said John Kilduff, partner with Again Capital. “They’re not going to take any kind of risk.”

Kilduff said if there’s any meaningful loss of Russian oil, prices will start to spike. “We could get upwards of $125 pretty quickly,” he said.