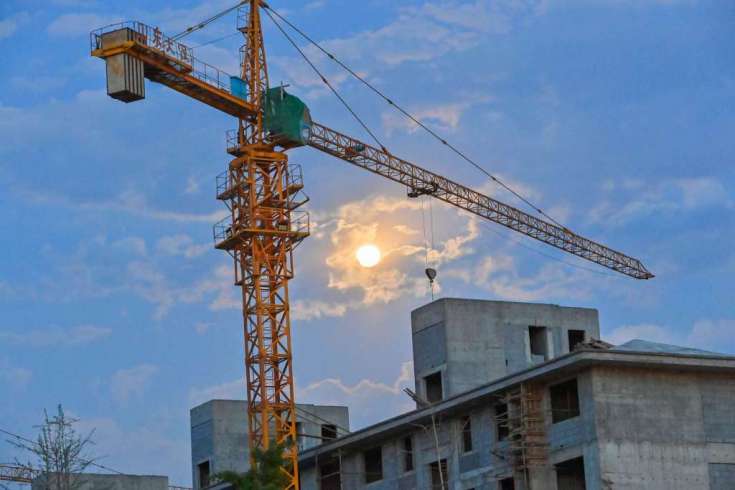 During the first four months of the year, investment in real estate development fell by 2.7% from a year ago. Pictured here is a project in Qingzhou, Shandong province, on May 15, 2022.

BEIJING — The Chinese government faces a growing shortfall of cash, analysts say, as they predict an increase of debt to fill the gap.

“The latest wave of Omicron and the widespread lockdowns in place since mid-March have resulted in a sharp contraction in government revenue, including land sales revenue,” Ting Lu, chief China economist at Nomura, and a team said in a report last week.

“Much of the incoming ‘stimulus measures’, be it special government bonds or incremental lending by policy banks, will be merely used to fill this funding gap,” the Nomura analysts said.

It’s that 3.5 trillion yuan figure they expect will be hard to fill, and they listed several measures, from using fiscal deposits to increasing borrowing, that could be used to make up the shortfall.

Economic data for April showed weakening growth as Covid controls took a toll. Premier Li Keqiang said during a rare nationwide meeting last week that in some respects, the difficulties were greater than in 2020.

Even before the latest Covid outbreak, land sales, a significant source of local government revenue, have plunged following Beijing’s crackdown on real estate developers’ high reliance on debt. Local governments are also responsible for implementing tax cuts and refunds that Beijing has announced to support growth.

The Japanese bank and analysts from other firms did not share specific figures on how much additional debt might be needed. But they pointed to growing pressure on growth that would require more support from debt.

Excluding tax cuts and refunds, the Ministry of Finance said local fiscal revenue grew by 5.4% during the first four months of the year from a year ago. Eight of China’s 31 province-level regions saw a drop in fiscal revenue during that time, the ministry said, without naming them.

Incomplete data for the period from Wind Information showed the regions of Qinghai, Shandong, Liaoning, Hebei, Guizhou, Hubei, Hunan and Tianjin posted year-on-year declines in fiscal revenue for the first four months of the year. Tianjin was the worst with a 27% decline.

In 2021, Tibet was the only province-level region to see a decline in fiscal revenue, according to Wind.

It’s “important to notice that the decline of fiscal revenue happened not only in cities under lockdown,” said Zhiwei Zhang, president and chief economist, Pinpoint Asset Management.

“Many cities without Omicron outbreaks also suffered, as their economies are linked to those currently under lockdown,” Zhang said in an email in mid-May. “The economic costs are not limited to a small number of cities, it is a national problem.”

Since March, mainland China has sought to control its worst Covid outbreak in two years with stay-home orders and travel restrictions in many parts of the country, notably Shanghai and the surrounding region.

Although financial data isn’t readily available for many Chinese cities, the southern tech hub of Shenzhen released figures showing a 44% year-on-year drop in fiscal revenue in April to 25.53 billion yuan. That followed a 7% year-on-year decline in March to 22.95 billion yuan.

“The local governments face mounting fiscal pressure. Their expenditure is rising but revenue dropping,” Zhang said. “Land sales are down sharply as well. I think the central government may have to revise the fiscal budget and issue more debt to help the local governments.”

Beijing in March already announced an increase in transfer of funds from the central to local governments. When asked in May whether that would be expanded, the Ministry of Finance noted some funding for next year would be transferred ahead of time to help local governments with tax refunds and cuts this year.

Pressure to spend on infrastructure

A “widening deficit means there’s a chance of more borrowing or debt burden in the future,” Chu said in a phone interview earlier this month. While she doesn’t expect off-budget borrowing will come back, she said it is an important signal to watch for assessing risk.

In late April, Chinese President Xi Jinping called for a nationwide push to develop infrastructure ranging from waterways to cloud computing infrastructure. It was not clear at what scale or timeframe the projects would be constructed.

“This year, one consequence will be that there will be less money left over for infrastructure expenditure,” Jack Yuan, VP and senior analyst at Moody’s Investors Service, said in a phone interview earlier this month.

He said since land sales have been an important source for local government spending on infrastructure, a drop in land sales and limited increase in special purpose bonds would restrict financing options for infrastructure spending.

“We expect the debt to continue to climb this year as a result of these economic pressures,” Yuan said, noting it remains to be seen how Beijing decides to balance economic growth with debt levels this year.