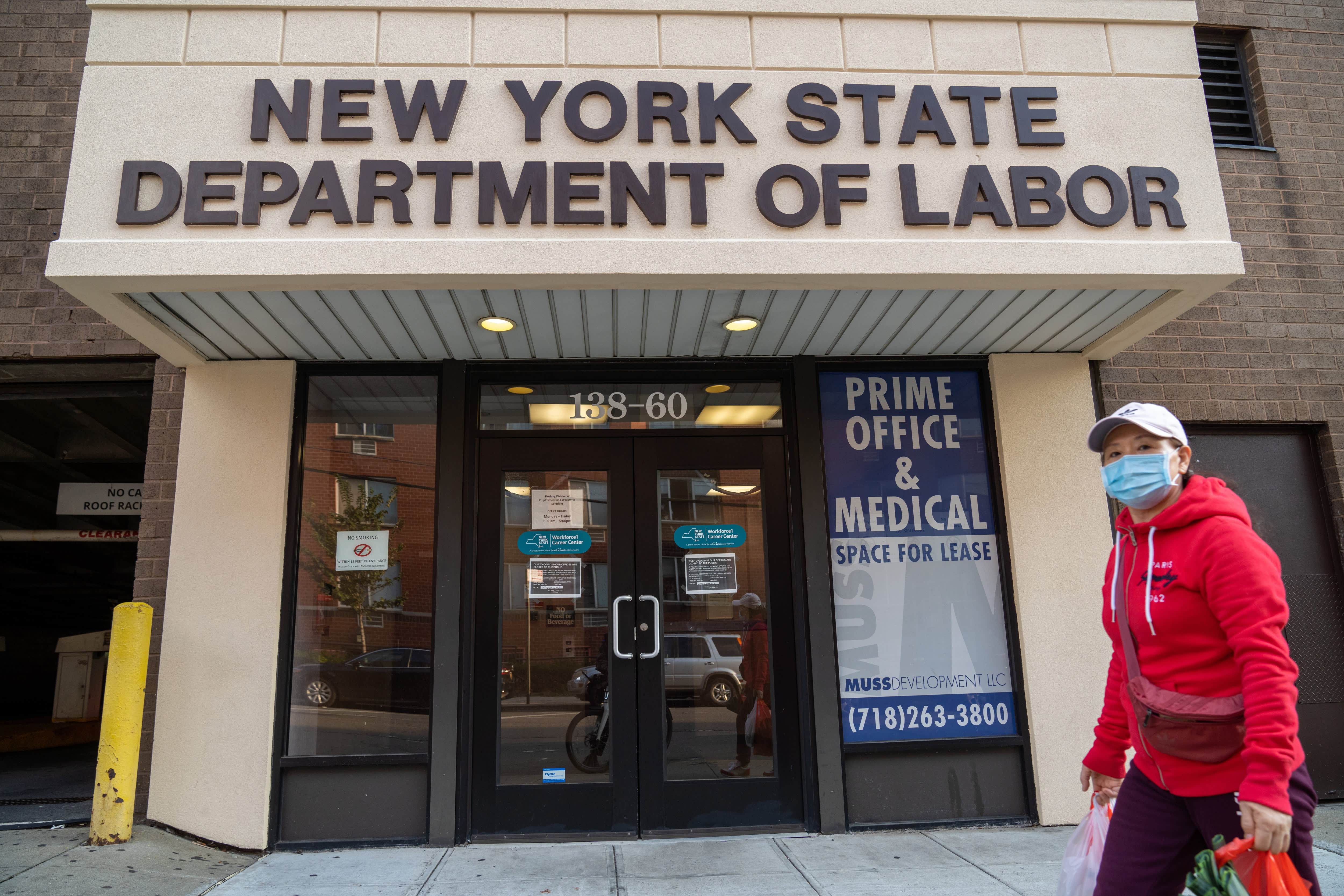 A man wearing a face mask as a preventive measure walks past the New York State Department of Labor in Flushing, Borough of Queens, New York.

“It’s up to the states,” said Andrew Stettner, a senior fellow at the Century Foundation. “I am hoping [they] will seek to follow the idea that there are a lot of mistakes made with PUA.”

Most states do waive overpayments made through their traditional unemployment insurance programs. They generally forgive the debt in instances of financial hardship for the recipient or due to error on the part of an employer or unemployment agency, though the law varies by state.

But 10 states — Delaware, Kentucky, Mississippi, Missouri, New Mexico, New York, Oklahoma, Texas, Virginia and West Virginia — don’t have such laws for their standard programs, according to the U.S. Labor Department.

Worker advocates are particularly concerned these states also won’t extend the protections to PUA recipients. States, in their rush to get money to people quickly and implement new relief programs, accidentally sent PUA benefits to thousands of workers in the pandemic’s early days.

Texas, for example, sent about 260,000 notices to PUA recipients between March 1 and Oct. 1 trying to claw back $214 million of funds, the state Workforce Commission said in the fall. Most people had made a mistake on their application.

Early in the pandemic we had some issues with mistaken payments being made to claimants, and now they have been asked to pay those back.

general counsel for the Kentucky governor

“This is a matter under current consideration,” Cisco Gamez, a spokesman for the Texas labor agency, said of waiving overpayments. “We are still going through recent [U.S. Labor Department] guidance and hope to have a decision soon.”

New York intends to waive PUA overpayments but hasn’t come to a final determination, according to a spokesperson for the New York Department of Labor who spoke on condition of background.

Delaware also hasn’t determined its course of action, according to Kenneth Briscoe, a spokesman for the state Labor Department

Officials in the Kentucky governor’s office hope to be able to waive overpayments, Amy Cubbage, general counsel for Kentucky Gov. Andy Beshear, said during a Jan. 8 press briefing. The state legislature would need to amend state law to do so, she said.

“Early in the pandemic, we had some issues with mistaken payments being made to claimants, and now they have been asked to pay those back,” Cubbage said. “As you know, the governor asked us to find a way to forgive those overpayments, because those were our mistake not yours.”

Spokespeople for the remaining six states didn’t return a request for comment.

Even states that do apply the new PUA protections have broad latitude to interpret when a person will or will not get relief, according to worker advocates. They may, for example, define “financial hardship” differently.