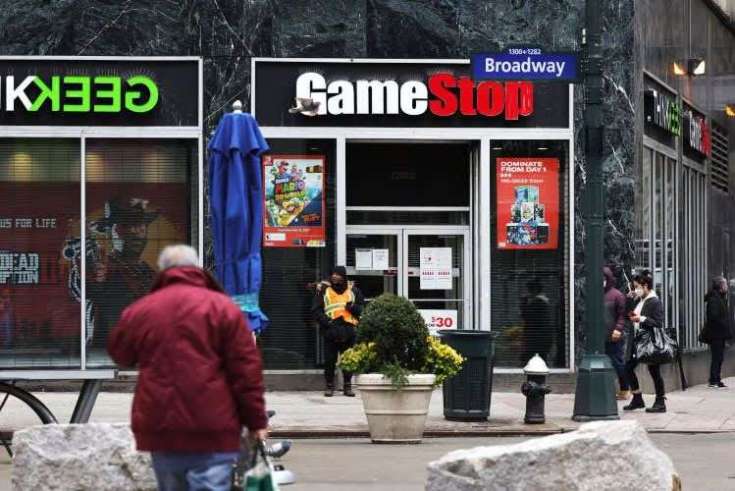 People walk past a GameStop store in Midtown Manhattan on January 27, 2021 in New York City.

The astronomical rally in GameStop has imposed huge losses of nearly $20 billion for short sellers this month, but they are not budging.

Short-selling hedge funds have suffered a mark-to-market loss of $19.75 billion year to date in the brick-and-mortar video game retailer, including a nearly $8 billion loss on Friday as the stock kept ripping higher, according to data from S3 Partners.

Still, short sellers mostly are holding onto their bearish positions or they are being replaced by new hedge funds willing to bet against the stock. GameStop shares that have been borrowed and sold short have declined by just about 5 million over the last week, marking an 8% dip in the short interest, according to S3. Most of the short covering occurred on Thursday, when the stock fell for the first time in six days.

“I keep hearing that ‘most of the GME shorts have covered’ — totally untrue,” said Ihor Dusaniwsky, S3 managing director of predictive analytics. “In actuality the data shows that total net shares shorted hasn’t moved all that much.”

“While the ‘value shorts’ that were in GME earlier have been squeezed, most of the borrowed shares that were returned on the back of the buy to covers were shorted by new momentum shorts in the name,” Dusaniwsky added in an email.

Shares of GameStop, along with other heavily shorted stocks, spiked once again Friday, after Robinhood said it was resuming limited trading of previously restricted securities. The gain pushed GameStop’s rally this week to over 400% and this month to more than 1,600%.

The video game stock has been the star of the show on the WallStreetBets Reddit forum, whose membership has grown rapidly to over 5 million. A wave of day traders continued to encourage each other to pile into GameStop’s shares and call options, creating a massive short squeeze that inflicted pain for hedge funds betting against the stock.

The borrow fee on GameStop’s stock — or the cost-to-borrow shares for the purpose of selling them short — jumped to 29.32% on existing shorts and 50% on new short positions, S3 said.

“If most of the shorts had covered, we would not be seeing stock borrow rates at these high levels — by now you would be able to borrow GME stock at single digit levels due to an increase in the lendable stock loan supply due to borrowed shares being returned after all the ‘supposed’ buy-to-covers,” Dusaniwsky said.

GameStop remained the most-shorted name in the market as short interest as a percentage of shares available for trading stands at 113.31%, S3 said.

Short selling is a strategy in which investors borrow shares of a stock at a certain price in expectations that the market value will fall below that level when it’s time to pay for the borrowed shares.